Through his life, the many paths Shan journeyed led right where he wanted to be
Author: Matthew St. Amand
Photographer: Trevor Booth
10 months ago
|
No Comments
Share On 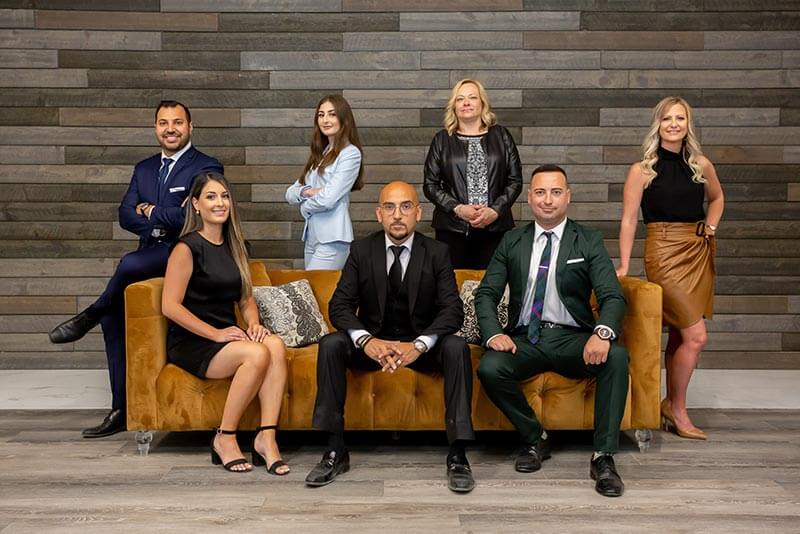 For Shan Hasan of RE/MAX Capital Diamond Realty, rising to the occasion comes as naturally as rising from bed in the morning.

Born in 1978, Shan grew up in Leamington, Ontario with his parents, Razia and Najam, and older siblings, Rosie and Kash.  During his formative years, Shan’s aspirations sometimes surpassed his abilities.  Standing five feet tall in ninth grade, he tried out for the high school basketball team three years in a row, finally making the squad in grade 11.

“My biggest focus, though, was tennis,” he says.  “Everything falls on you.  If the ball flies by, you missed it.  If your serve is out, that’s you.  There is nobody else to look to.”

Following high school, Shan studied Criminology and Sociology at the University of Windsor.

“My mind was always filled with ideas,” Shan recalls, “which made it difficult to concentrate on my classes.  I wasn’t one to just sit and read.  I needed to see it, do it, and learn!”

He soon his got his chance.

“My brother lived in Chicago,” Shan says.  “He called and told me about an entertainment-based magazine in Chicago that was popular, wondering if Windsor could support something similar.  This was before Facebook—the magazine really cornered the market, reporting on clubs, concerts, and events.”

Shan jumped in with both feet and Windsor Social Magazine as born in October 2002.

“It was a pocket-sized magazine that people thought was really cool,” Shan explains.  “We took it online, hired photographers to hit clubs and concerts.  People visiting the website could see what happened last night.  The magazine boomed.  The website had 10,000-plus views a day, back when people had dial-up!”

A year later, after a trip to Toronto, Shan and Kash launched Toronto Social Magazine.  Shan was finally receiving the education that he wanted:

“I learned that selling, in general, is tough,” he says, “but selling advertising is the toughest sale you can make.  We stuck with it, and Toronto Social Magazine took off.  That’s when I cashed in my chips at the U of W.”

Every trip to Toronto took the Hasan brothers through London.  One day, they wondered: “Why don’t we try the magazine here?”  They did, and though few steps in the process came easily, they made a success of it.

The brothers ran the magazines for 15 years.

Shan recalls: “During that time, other businesses called us, asking us to make them websites and do graphic design work for them.”

Never ones to say “no” to work, Shan and Kash launched Blue Apple in 2008, which they promoted as a marketing agency.  Blue Apple printed Windsor Social Magazine and eventually built a roster of more than 300 clients.

“It was a very natural, organic progression,” Shan says.

With all boom times and great ideas, there comes a moment when those in the vortex ask: “What’s next?”  The question came at a crazy time for Shan.

“I was engaged and had a baby on the way,” he recalls.  “Windsor Social Magazine and Blue Apple were great, but they wouldn’t sustain a family.  I had a knack for sales, so I asked myself: ‘What is the biggest thing I can sell?’”

The answer was almost instantaneous: “‘Real Estate’ popped in my head,” he says.  “That night, I registered for my real estate license.”

Shan did not relish the return to classes and texts books, but having a goal kept him motivated.

“It’s amazing what you can accomplish when it’s not for you,” he reflects.  “All the molds I created for myself in my head, broke, and I stepped up my game, studied from 10 p.m. to 2 a.m. every day.”

He completed the program in 16 months, passing every exam while running multiple businesses.

“Getting my license was a very emotional experience for me,” he says.

One policy Shan had throughout his life was that he told very few people about his ideas and endeavors in the early stages.

“I told a close friend about the concept for Windsor Social Magazine,” Shan says, “and he said: ‘Man, that is the stupidest idea I ever heard!’  I made a mental note of that.”

While he worked to obtain his real estate license, Shan slipped and shared his plan with a trusted mentor.  The mentor said: “Shan, are you crazy?  You’ll be eaten alive!  That is such a cut throat industry!”

Rather than being derailed by the negativity, it motivated Shan.  “Natalie’s opinion is the only one that matters, anyhow,” he says.

Another person who believed in Shan was his neighbour at the time, Nick Tonita.  Nick asked Shan to sell his house.

In a matter of weeks, Shan made the sale and helped Nick buy his new house.  He never looked back.

During his Blue Apple days, Shan pursued real estate agents as potential clients.  Few, if any, took him up on the offer.  Shan now put those ideas to work for himself.

“I was among the first agents to post video tours online,” he says.  “Finding the most effective marketing techniques is a never-ending search.”

In August 2009, Shan and Natalie’s daughter was born.

With a family to support, Shan turned on the afterburners, rising to one of the top agents at Royal LePage Binder Realty (among approximately 100 agents).  Almost immediately, his numbers doubled.  The following year, his numbers doubled, again.  Soon after that, Shan was so busy, he went to his manager and said: “I need to explore a team.”  This would become The Hasan Group, a team Shan thinks of as his second family.

The first agent Shan brought on was Elton Fero, a charismatic honours graduate in Communications from the U of W, who has a genuine passion to care for people, which is reflected in his stellar sales numbers.  Samantha Eskharia joined soon after, making a strong impression, bringing nine years experience as a CBSA Customs Analyst.  Amy Willms came on board for her customer service experience and ability to build relationships.  Shan describes her as, “taking Leamington by storm.”  Crystal Eskharia is Business Administration graduate from the U of W.  She is methodical and aggressive in her approach and brings vital social media savvy to the team.  Jay Khawaja brings 15 years of sales experience from the banking sector.  Administrative assistant, Joanne Thibert, provides the invaluable support required to keep the team rolling.  She is in the process of becoming a Licensed Team Coordinator.

By 2019, Shan had earned top accolades at Royal LePage Binder Realty, being named to the “Chairman’s Club” as one of the Top 1 percent sellers among its 18,000 agents across Canada.

In the last seven years, The Hasan Group has worked with more than 550 clients and have facilitated more than $135,000,000 in real estate sales.  For all the honours and top seller lists, Shan and his team remember why they do what they do: “Our motto is: ‘People, property, and passion’,” Shan says.  “That sums up The Hasan Group experience.  Everything is a relationship.  Everything is about the people.”

It would be easy for someone firing on all cylinders, experiencing such success, to get lost in his own legend, but Shan Hasan keeps it real and his focus does not waver from what is most important in life: his family.

“I am blessed with an amazing wife and two incredible kids,” Shan says.

His wife, Natalie, is a former social worker, and owner of P.R.A.Y. Boutique in Walkerville.

“She has sacrificed everything so I can do what I do,” Shan says.  “She plays a huge role in our lives.  I can’t imagine anyone better being our guiding light.  She has been by my side from the very beginning.  She’s had her struggles, too, but knows the best is yet to come.”  Then he laughs: “She’s also the only person who can tell me I’m talking too much!”

Since Day One of his career in real estate, Shan set aside every Saturday as “Family Day”.  No matter what is going on, he spends that day with his family.  As for vacations, some might envision Shan jet-setting in Saint-Tropez, but his favourite getaway is driving up north to camp with his family.

“We want our children to know and love what Canada has to offer.  It’s so beautiful.  There is nothing better than being in nature, with a fire going.  After three days, I am so refreshed, clear-headed.  The trees and the earth and the water heal me.  I really get into it and my wife says: ‘Yes, we’re in nature, but you can change your clothes, once in a while.  You don’t need to become a cave man!’”

Shan also believes in giving back to the community.  Annually, The Hasan Group donates generously to local causes, such as In Honour of the Ones You Love – Essex County, Humane Society, SickKids Foundation, and the Canadian Cancer Society.  Transition to Betterness is close to Shan’s heart after his mother was diagnosed with cancer.

“Amid the chaos of my mom’s final days,” Shan remembers, “Amber and her team at T2B stepped up immediately, not because I was a sponsor, but because it’s what they do.  They genuinely helped.  In the room provided by T2B, my mom lived the last moments of her life in peace and comfort.  I will never forget that.”

Although tennis was his sport in his youth, Shan says the most important lesson he learned was in basketball: “Team sports teach us how to work with others, performing your role so that the team, as a unit, can succeed.” He is circumspect about his success, as he reflects: “It’s been my honour and privilege to play a role in helping my team grow their businesses, expand their minds, and live the most satisfying lives they can.  As for the future, so much has happened in the last seven years.  In fact, just two days ago, I passed the last exam for my broker’s license.  I have big plans, but I have learned to keep an open mind.  All I can say is: Life is beautiful!”