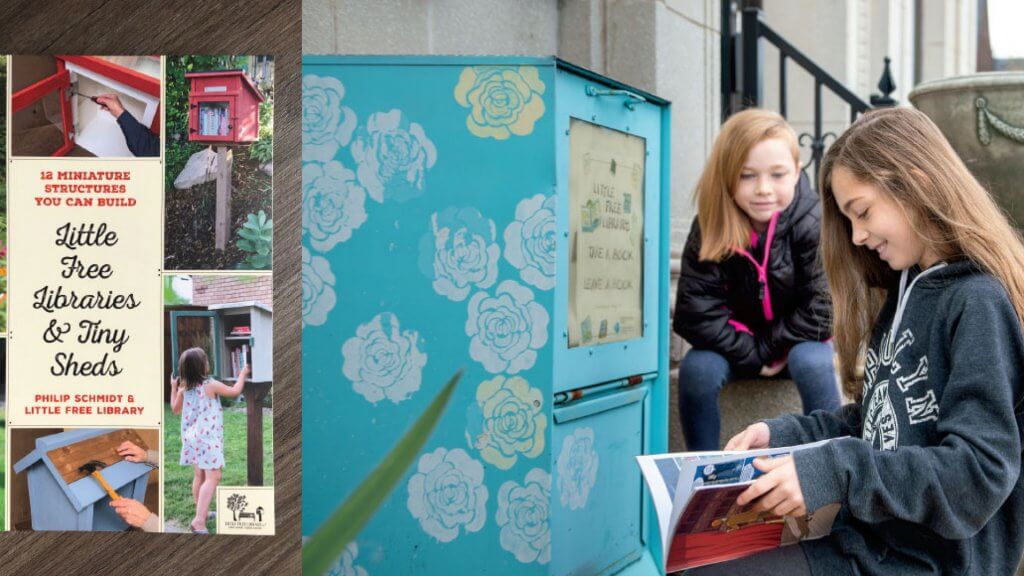 Have you taken a walk recently in Windsor and noticed a Little Free Library (LFL) in your area? Nestled outside different homes and businesses in Windsor, these miniature structures house books that are deposited voluntarily by people passing by who may or may not take a book in exchange

Todd H. Bol started the first LFL in 2009 in Hudson, Wisconsin, as a tribute to his mother, who had been a dedicated teacher her whole life. Today, there are over 80,000 Little Free Libraries in over 90 countries. In response to the LFL movement’s 10-year anniversary, the book Little Free Libraries and Tiny Sheds, by Philip Schmidt and the Little Free Library organization, explains how to plan and design your LFL, including suggestions for the best materials and necessary installation methods. The book also offers 12 full plans for structures if you’re interested in building one outside your home or business to create a tighter-knit community in your area.

Magda Swisterski, a French teacher who has been at Lakeview Montessori for 31 years, had the idea to have one built on the school property after noticing them on Facebook in 2014. The organization has Little Free Libraries for purchase, but because they’re a little expensive, Swisterski’s godson, John Swisterski, made a custom one for the school.

One student, named Quinn, decided to bring in a bunch of books from his own collection. “Quinn, this book hero, was going to put all these books into the library,” Swisterski laughs, recalling the story. “And then the kids started looking at his books and it took 10 minutes and after he said, ‘Madame, these books are so good, I’m going to take them back.’”

Professor Maureen Harris, the Head of School for Lakeview, loves how the LFL bolsters students’ interests in reading while connecting with people in neighbourhoods. “The point is that it brings the neighbourhood together and creates an interest for the children in the books, because it’s not just the same book on a shelf that they see all the time.”

Lakeview isn’t the only place in Windsor that has a LFL; there are 10 registered through the LFL website. On the site, you can type in Windsor on the world map to see where you can find a nearby LFL. Anyone can put up a LFL, but only those who register theirs through the organization’s website will appear on their map.

Jay Armeland, a Windsor lawyer, has a LFL outside of his Walkerville office (though it wasn’t until our conversation that he realized he could register it online). After visiting his children in Toronto, Armeland’s son explained what a LFL was when they were passing one on their way to dinner and Armeland thought it would be a great idea to start one outside of his office.

“I already had the container and we used to put magazines in it,” he explains. “I had one of my daughter’s friends, Samantha Bryan [@sambstyling on Instagram] paint a design on the outside.” Armeland has been a big reader his whole life and he sees how important it is to share the wealth. “Everybody has extra books in their house. I know from myself, once I read a book, I’m not going to read it again so somebody else can benefit from it.”

Heather Teahan is a Windsor resident who has her own LFL called Little Shepherd Street Library. Teahan’s father, Frank, took a couple of months to build the library that now has the neighbourhood connected. A local daycare brings the children by every week, and so Frank built a shorter children’s book section that’s more physically accessible for the kids.

“I lived in the neighbourhood for five years, and I didn’t really know any of my neighbours until I put that library up three years ago. Then all of a sudden, it was something to talk about. My one neighbour on the right and I are really close now because we read the same books. Who doesn’t love a story? And even if you aren’t a big book reader, you can tell somebody about it. My husband isn’t a big reader but I tell him all the time about the stories I read.”

The LFL also inspires other community-building projects. Lakeview Montessori installed a Buddy Bench after one student came in and wanted any lonely students to have a safe spot to sit if they needed a friend. Harris explains it as an invitation for connection. “It’s reaching out to the community and seeing if the community will respond to you. Same with the library. Reach out to the community and see if they respond. If you give people kindness and an opportunity, they will nearly always respond with empathy and compassion.”

Learn step-by-step how to become a LFL steward and create your own LFL today either by purchasing Schmidt’s book or visiting littlefreelibrary.org/