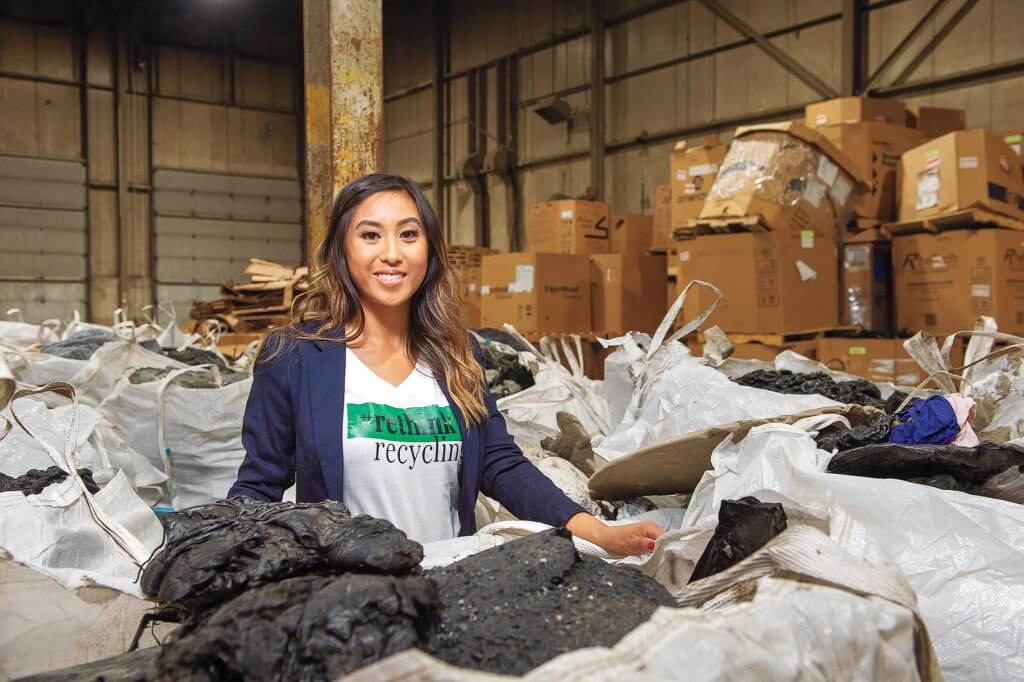 “The world is waking up and change is coming.” These hopeful words echoed around the globe as 16-year-old Greta Thunberg took the stage at the U.N. Climate Action Summit. Her viral speech had been on a constant loop for 24 hours after she gave it—each fact, each statement ringing in my ears and leaving me to wonder if I was doing enough. I grabbed my keys next to the S’well bottle I proudly toted around with me as a badge of honour. “See? I’m doing my part,” I thought to myself as I slid my keys into the ignition and heard the roar of the carbon-producing machine come to life. As I pulled out of my driveway, I caught a glimpse of the reusable bags I stored in the back seat of my car, a smug smile forming on my lips. “I’m definitely doing my part.”

Little did I know, my journey and education on the subject of single-use plastics was just beginning. I was heading off to meet Andrea Descargar, an advocate on the issue and a jack of all trades in the industry. Not only is she the sales rep at Green City Plastics, a local plastic reprocessing company, she’s also the CEO of two other companies: Launch events, a complete event-planning service for private and corporate functions; and Canadian Eco, an eco-friendly wholesale retailer that also doubles as a platform for all local retailers with a sustainable business model.

I pulled into the parking lot for Green City Plastics, where I was greeted by Andrea. “Let me show you around,” she said as she led me through the facility. Gigantic bins of plastic waste were piled into the 20,000-square-foot warehouse, contorted and melted into swirling shapes of toxic art that had been deemed unusable by the company that discarded it. The team at Green City Plastics gathers post-industrial plastics that would otherwise end up in a landfill and breaks them down into regrind form—like small bits of plastic mulch. The plastic is then sanitized and resold to be reused and repurposed.

“See this?” Andrea said, holding up a chunk of plastic. “This is HDPE [High-Density Polyethylene]. This is the same stuff that makes totes and recycling bins.” She whizzed past rows of bins, her knowledge clearly driven by passion. “See those? That’s polypropylene. Because of the high cost that the bin providers charge commercial companies to remove plastics and recycle, it’s not cost-effective for them, so what they’re doing instead is they’re throwing it in a landfill. You have no idea how much is produced! What we do here is offer the free recycling program for commercial and industrial companies to process their plastic and find a home for it.”

Before taking on the sales role at Green City Plastics, Andrea, like most of us, was blind to the amount of plastic that was being thrown into landfills every single day. “I never went to school for this—I knew nothing,” she said. “I would have never gone into recycling but my friend opened up this plastic reprocessing company, Green City Plastics, so I took on the role. I had this idea to go up to manufacturers and say, ‘Hey, let’s take your plastic.’ I had no idea what I was doing; I didn’t know anyone in this industry.”

What started out as an idea quickly turned into so much more. The woman who knew nothing about recycling became an advocate for change, a leader in her industry, and the voice for the ban on single-use plastics. “What really opened up my eyes and drew out my passion for recycling is working here and seeing how companies just throw out brand new helmets, headlights, Tesla bumpers, everything,” she said. “Even if it just has a small scratch, it doesn’t make the line and it gets thrown out.”

With her first company, Launch Events, Andrea saw first-hand that there was a need for eco-friendly options not only for the industrial companies, but for the average consumer. “Being in the event industry, I see so much waste, but a lot of people are actually saying that they don’t want plastic cups and they want something more eco-friendly,” she said. Her mission was clear. “Just seeing everything getting tossed in the landfill is just disgusting,” she said, a fiery passion showing through her words. “There aren’t many younger people, especially women, in the industry who highlight this stuff. I just really wanted to be the voice behind this and shed some light on how we could be eco-friendly and hopefully grow some kind of movement.”

Andrea’s passion stms from a particularly eye-opening experience at a Toronto trade show, where she learned about the versatile use of polylactic acid, otherwise known as PLA, a common plastic substitute mostly made from fermented plant starch. “It  looked and felt like plastic,” said Andrea, excitement building in her voice, “but it was actually all plant-based and decomposes in 120 days.” That’s when she realized the world of opportunity that was available and thus, Canadian Eco was born. “I wanted to start selling [PLA alternatives] but I realized it’s a bit too much right now because I have my other business. So I said let me just start with straws.” Since its inception, Canadian Eco has expanded its platform to highlight all eco-friendly retailers in the city.

Descargar’s eco-friendly journey has led her to a position where she can not only help reuse thousands of pounds of plastic within the region, but she’s also educating consumers through her Canadian Eco platform. “I think if we all just start this small movement and have it spread across Ontario, we can do the same thing that Greta [Thunberg] is doing. It is possible!”

She continued, “Every now and then you hear about countries banning single-use plastics, but what are we actually doing about it?” The question lingered in my mind for the rest of the day: what can we actually do about it?

Whatever you’re capable of. I can talk about it, write about it, and pass the torch of knowledge to the next person who wants to make a change. As for Andrea, she plans to continue to grow her platform, support other local changemakers, and supply more eco-friendly options to environment-conscious consumers.

For more information about Canadian Eco, visit their Facebook page at Facebook.com/CanadianEco.

Make this the year you reuse gift bags, wrapping paper, even cards that haven’t been written in. Save yourself one less task during your holiday shopping and don’t be afraid to reuse your gift-wrapping paper. Even if it seems like the piece can’t be salvaged, you can always use the wrapping for smaller gifts. Not only are you being eco-friendly and saving paper, but next year you’ll have several wrapping options!

Nothing says Christmas more than the smell of Mom’s cinnamon spice candles. If you’re going to buy your own, shop from your local candlemakers as most of the commercial candles are made with toxic ingredients. According to KeeperoftheHome.org, “Paraffin is the major ingredient in most conventional candles and is a sludge waste product from the petroleum industry. It releases carcinogenic chemicals when burned. The soot/fumes are similar to that released from a diesel engine and can be as dangerous as second-hand cigarette smoke. This can contribute to serious respiratory issues like asthma.”
One local alternative is Walkerville Candles—not only would you be supporting local, but this is a recommended, eco-friendly choice.

Compost all your leftovers

With all the food we indulge in, especially with kids, there always tends to be a large amount of leftovers and scraps. We don’t think of composting during the cold winter months; however, a local company in Windsor called GreenerBins Compost offers the option of composting your household food waste for you.

Reusing plastic zip bags, or subbing beeswax wrap to cover your leftovers in the fridge is the eco-friendly way to go. A local company in Windsor called Beekeeper Food Wraps creates washable and reusable food wraps made with local beeswax, jojoba oil, and tree resin. There are also vegan wraps available!

A lot of people want to get a fake tree, thinking it’s more sustainable—you’re using a fake tree instead of cutting down a real tree. But the real ones come from tree farms and are harvested, and the city offers a recycling program for them when the holidays are over. There are also a lot of toxins in the plastic trees; it takes about 20 years of use to make that one fake tree sustainable.