Medo Martinello is a lacrosse legend, but Virginia, his wife, is the anchor of their family
Author: Devan Mighton
2 years ago
|
No Comments
Share On 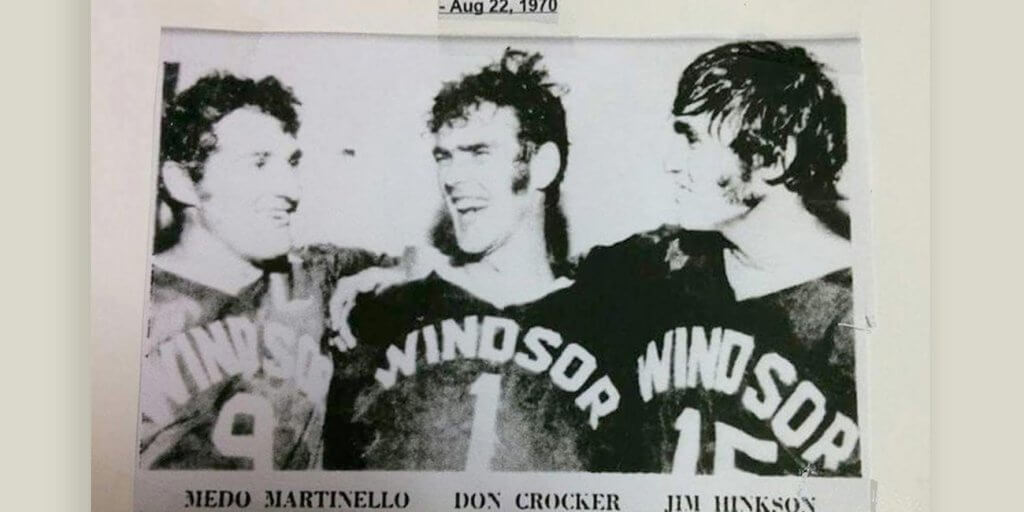 Medo and Virginia Martinello have been married for 64 years. By today’s standards, that’s an eternity.

“I don’t count the years,” laughs Medo. “I never used to count over 39 on my own age, so I think that’s one of the secrets of everything.”

“I don’t think it’s a secret—there’s a lot of give and take in marriage,” says Virginia. “It’s just cooperation between two people and you have to understand that you have to give and take.”

“And  I think it was more me giving and her taking,” jokes Medo.

Virginia and Medo have lived very different lives. Virginia quickly converted from schoolgirl to stay-at-home mom. Medo worked as a plumber by day and toured North America as a professional hockey referee and lacrosse legend by night.

“She’s quite a person, she actually salvaged my sporting career,” gushes Medo. “Even when I was coaching in Quebec or New York, you always had that feeling that the family life was stable—that it was being run properly.”

Medo fell in love with Virginia at a young age. They grew up across the street from each other, sneaking peeks when her mom wasn’t looking.

“She lived in our neighbourhood,” he remembers. “Her mother used to keep her from us across the street.”

He had a feeling, deep in his heart, that he was staring at his future.

“You kind of know that this person is the one for you and you go ahead with that,” he explains. “I don’t know, it’s a feeling that you have and it worked out very well for us.”

Medo was a talented hockey player, but his dream ended when he developed a knee injury in his teens while trying out for the St. Catharines Teepees—a team that, over the years, featured such future NHL greats as Stan Mikita, Bobby Hull, Phil Esposito, and Moose Vasko.

In early 1957, Virginia gave birth to their first son, Wayne. The couple was blessed again with Ron before the calendar year was over.

“Fortunately, I was able to stay home because Medo was a plumber,” explains Virginia. “He had a good job so I could take care of the children.”

Four years on, the couple added a third son, Terry, and a year later, Linda.

“They were very good kids,” she fondly remembers. “We tried to keep them busy with all of their sports so they behaved themselves pretty well. If they didn’t, they knew that their father would be home on Sunday night and they would be reprimanded if there were things going on.”

From a young age, Medo loved lacrosse. He was great at it and his career was long and successful. His love of the game transferred to all three boys. Wayne and Ron would bring Junior B and C national championships to Windsor. In the late 1970s, when the Windsor Warlocks were promoted to Junior A, all three boys would team up on the floor—making their parents proud.

But Dad was on the road a lot—busy with work, professional lacrosse, and refereeing hockey games—and often the boys’ sports were Virginia’s load to bear.

“[Mom] didn’t drive originally and I still remember when, all of a sudden, it was time for her to get her licence because we had to get around,” remembers Ron.

Terry remembers being horrified by a car crash he and Virginia saw on the way to the Harrow Arena one evening.

“I think I probably got driven around more than anybody because, by that time, Dad had hooked up with Western Collegiate Hockey Association. That was all weekend stuff, so he was gone every single weekend,” he recalls.

When Medo was home, the house became a revolving door, with Virginia taking one kid and Medo heading in the other direction with another.

“It always worked out that they ever played in the same arena except when they were in high school,” remembers Virginia.

One of the reasons Medo was on the road a lot was due to his love of hockey. He was a proficient referee and highly sought-after. At one point, he was reffing for four different leagues.

In 1959, he made a decision that changed his life. “I turned down an NHL career because they wanted me to move to Oklahoma City, to work out of there, but in the meantime, I had been doing so many other different leagues and the pay-scale was so minimal,” he recalls.

He knew the added travel and possible relocation would take a toll on his young family and would not be fair to Virginia. “Being away for that long, at the time, I just turned it down and said I’d just rather continue what I’m doing. That was kinda like saying to myself, I’m quite happy with what I’ve got and I don’t want to spoil it.”

Medo stuck with lacrosse. His knees were getting worse and after a season of pro with the Detroit Olympics in 1968 and winning the Senior B national championship in 1970 and 1971, he turned to coaching.

While his sons tore it up in junior, Medo was coaching in the National Lacrosse League in Syracuse and Quebec City, winning a pro title in 1975.

The boys were busy keeping their mom entertained. Unfortunately, she and Linda’s favourite spot to sit was right behind the penalty box.

“Once I got into a little scrap with a guy from Sarnia and walked into the penalty box at the old Windsor Arena—and he was chirping at me and I started to use some vulgarity at him,” laughed Ron. “I looked up and there was Mom, sitting right there, with her eyes almost popped out of her head because she had never heard that out of me before.”

She decided that it was a good time to pick a new favourite seat.

“[Linda] was always very sports-minded,” credits Virginia. “It didn’t matter if we were working at the bar at the time, she could argue any [sport] with anybody who was there.”

Linda fondly remembers the early days before her mom received her driver’s licence.

“My mom always made sure that I had my own time,” remembers Linda. “She was a dancer when she was growing up—she was wonderful—so she put me in dance class and every Saturday morning we would jump on the bus.”

They would attend Linda’s dance class and follow it up with a trip down to Kresge’s Diner. “We’d walk on those wonderful old wood floors, back in those days when you could hear them creak and everything, and we’d sit at the counter and have a grilled cheese sandwich before we’d go home. It was always the best day because it was just her and me, so I didn’t have to share her with my brothers.”

Wayne and Ron accepted scholarships to the University of Maryland, while Terry stuck with the Warlocks until 1979 and then won the Canadian Junior A championship with the Whitby CBC Builders. Terry was named MVP, leading the Builders to a seventh-game victory.

In his junior year of college, Wayne developed a viral infection that left him hospitalized for two months. “[Mom] picked up, put her life on hold, and stayed with me,” Wayne remembers. “Mom came to the school and stayed there in a dorm with a group of girls who were friends of mine for a little over a month, spending all of her days at the hospital with me. Dad did what he had to do around the house, everybody else carried on, and she was 600 miles away from home.”

Terry accepted a scholarship to the University of North Carolina and, as a sophomore, won the 1982 NCAA Championship.

With her boys gone, living their dreams, Virginia would go down to Adie Knox Arena to watch their old Assumption Purple Raiders play and daydream of their old trips to the rink.

Ron opened up Faces on College for Medo in 1981, a well-loved hangout at the University of Windsor for three and a half decades. It became a family business. They also bought the well-established Pizza King restaurant to give Faces a staple food.

Faces on College is now a fond memory, but Medo and Ron still love serving pizza and telling stories at their Pizza King location on Pillette Road.

In the twilight of their lacrosse careers, the Martinello boys were given one more chance to enjoy the sport that they love. In 1989, the Martinellos helped establish the Detroit Turbos of the Major Indoor Lacrosse League (since renamed the National Lacrosse League). Ron and Terry starred on the floor, Wayne was the general manager, and Medo was once again head coach.

The team was a success. Ron was a second-team all-star in his second season, Terry won the 1990 scoring title and is the franchise’s all-time leading scoring, and Medo coached the team to the 1991 MILL Championship, becoming the first coach to win a title in both incarnations of the NLL.

Medo describes Virginia as the anchor of his life—and their family.

“She certainly was a big part of everything,” explains Medo. Without her, none of this could happen, “being that I was away a lot with coaching and stuff and she handled all that affair, taking [the kids] to their games in hockey, in lacrosse, being a big part of my life.”\

“A lot of people have great times in their life, with their marriage, and I think we’re fortunate—we’ve had sufficient good years.”

The Kindness of Strangers