Save the date, because Farrow Riverside Miracle Park kicks off its official grand opening May 14 with a celebration in the heart of historic Olde Riverside.
Author: Karen Hall
3 months ago
|
No Comments
Share On 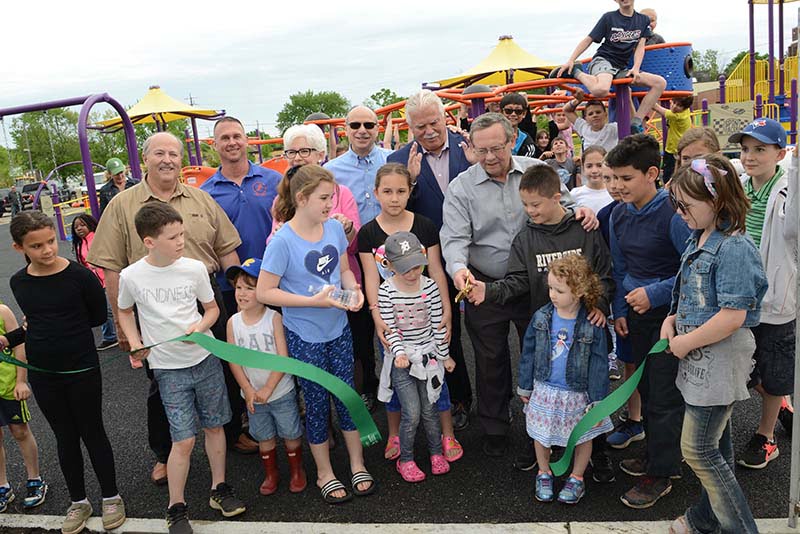 Save the date, because Farrow Riverside Miracle Park kicks off its official grand opening May 14 with a celebration in the heart of historic Olde Riverside.

The highlight of the day will be the first Miracle League Baseball Game ever played in the City of Windsor. That is exceptional in itself, but the journey to get to this point has been just as extraordinary and inspiring.

It was 2015 when executive members of the Riverside Minor Baseball Association started thinking about bringing a Miracle League Baseball Diamond to Windsor.

Wouldn’t it be great, they said, to create the opportunity for any kid, regardless of ability, to play ball within our city limits? To give young boys and girls a specially designed field so they, too, could enjoy the sport that had been synonymous with Riverside for more than 60 years?

But why not build on the Miracle League philosophy and make this dream even bigger? Open it to the entire region and people of all ages, with an all-inclusive playground, a wellness track, accessible workout stations, pavilion, a relocated Cenotaph. Maybe a place to sit in the shade on a sunny day and have a picnic with the family …

The possibilities were endless, and RMBA members knew exactly where this state-of-the-art park and ball diamond should be: On the site of the old Riverside Arena, which had closed in 2011.

Bill Kell, who would become a steering committee co-chair along with Rick Farrow and RMBA president Tom Laporte, didn’t realize the perfect location had been sitting there all this time. Not until the wrecking ball demolished the arena at Wyandotte and St. Rose and it became a clean slate.

What followed over the next two years was a testament to the tenacity of the residents of Riverside, to the passion of RMBA members, and to a group of grassroots supporters, some of whom had never played a game of baseball in their lives.

It is  also a tribute to Windsor Mayor Drew Dilkens, Ward 6 Councillor Jo-Anne Gignac and their elected city council colleagues, who listened with open minds to a proposal far removed from the original plan to build commercial and residential units on the site.

On June 19, 2017, city council voted to allow RMBA to lease the land and build the Miracle Park. It also agreed to partner with the organization to spruce up and augment existing amenities.

There’s no question co-chair Rick Farrow was key to sealing the deal that night. Speaking quietly before council, with a standing-room-only crowd leaning in to hear him, Farrow personally pledged $500,000 toward what RMBA expected would be a $3-million project. By October, a multi-year lease had been signed.

Everyone was there when they broke ground in August 2018. There were politicians and players with ceremonial shovels, neighbourhood well-wishers, people in Riverside Royals T-shirts and baseball caps. And there were some of the generous donors who would help RMBA take it to the next level: The Solcz Family Foundation, the Toldo Foundation, Mark Solcz, Southwest Sales, Ken Quinn and Family, the Ontario Trillium Foundation, Moramos Shrine Club of Windsor, and the federal government.

“We call this the field of dreams,” Bill Kell said as he stood on a mound of parched earth and crumbling asphalt that bright August day. “This is truly a dream come true.”

Rick Farrow, raised in Riverside, felt the same way. His father, Huntley Farrow, had served as a city councillor in both Riverside and Windsor, and had loved his community. How could he say no?

“I did it for my dad,” Rick would later say when asked what motivated him. “For my dad and for the kids.”

RMBA was quick to show its gratitude to the park’s two largest donors. The Farrow Riverside Miracle Park is dedicated in memory of Huntley Farrow. The baseball field is named for the Solcz Family Foundation, which contributed $250,000 to the project.

Construction of the park got off to a great start. The city began renovating change rooms, bathrooms and the parking lot. Councillor Gignac provided $100,000 in ward funds and the Canadian Tire Jumpstart program contributed $350,000.

The magical, 13,000-square-foot fully accessible playground – the largest in Ontario — opened in 2019, and it was hoped the park’s official grand opening would take place in May 2020.

Then COVID came along. Twice the grand opening was postponed, yet the park still became a destination attraction for families across Windsor and Essex County, most of them wondering when the Miracle Diamond would be revealed. And soon they’ll know. The Farrow Riverside Miracle Park – every beautiful inch of it – officially opens at 11 a.m. on Saturday, May 14, 2022. (See you Sunday if it rains.)

“Downtown Believers” Find a Home at The Hive on Pelissier