The Maestro of Canadian Whisky 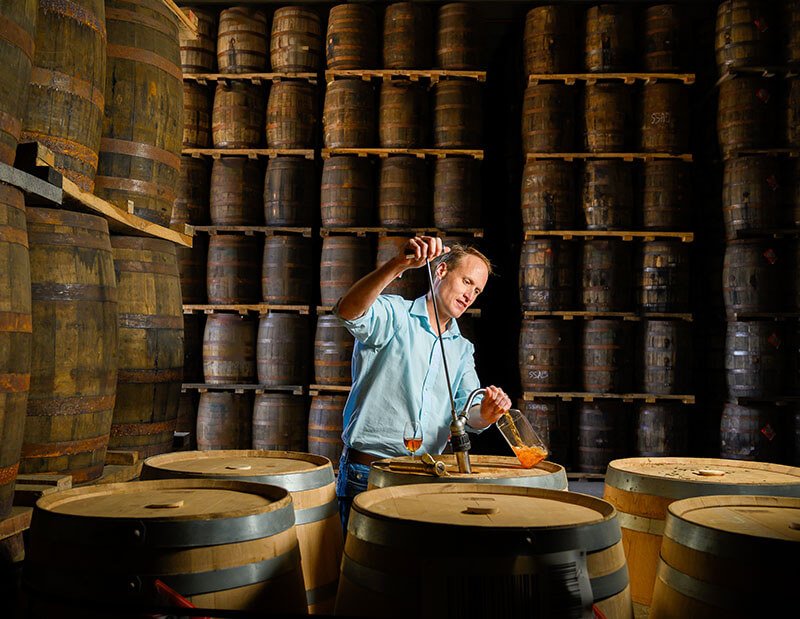 Whisky is a storyteller’s drink. Each drop of amber, aged with care, is a time capsule, a record, a legacy of decades of careful selection, endless planning, and dedication to the craft.

Canadian whisky dates back to the late 1700s, but the American Civil War transformed the category. Young entrepreneurs like J.P Wiser and Hiram Walker, travelled to Canada and created a legacy that has endured. Just like a spirit maturing in a cask, Canadian whisky has evolved over the years through the hands, hearts, and minds of those who made the hard decisions, predicting the future, what the whisky drinkers of today will enjoy.

“My intent was never to go to school to become a whisky maker, brewer, or distiller,” he says.

A quarter-century ago, Livermore sat down for a job interview at Hiram Walker & Sons, and the trajectory of his life changed. Not a whisky drinker himself, the microbiology biochemistry undergrad learned his art on the fly. In 2004, he received his master’s degree in distilling and brewing at Heriot-Watt University in Scotland and his doctorate in 2012. In the same week, he was promoted to be Hiram Walker’s master blender.

This year, Hiram Walker & Sons won its fourth straight Distillery of the Year Award at the Canadian Whisky Awards.

“I’m grateful for the people I work with,” states Livermore. “You’re only as good as the weakest link of your chain. At the end of the day, our research and development team are designing the whiskies, but we design from the quality ingredients that everybody else makes here.”

“We’ve got such a great staff at Hiram Walker here. We’ve got some of the most talented people in the world that make whisky here in Windsor. It takes a great team to make great whisky.  Decisions such as selecting good quality grains, fermentation parameters, and they’re helping me through these things – getting me different barrels, different ways to make whisky, distillation techniques such as different types of pot or stills and column stills, and choosing new types of barrels all play an important part in the final whisky recipe.”

“It’s an incredible and talented facility, and the record shows. We’ve won the distillery of the year now four times in a row. I think that says a lot.”

Livermore didn’t come into the business as a whisky drinker, but as a scientist in love with creating.

“My educational background was never designed to be whisky but more of a fermentation specialist,” explains Livermore. “I never really was into whisky. I had some typical Canadian whisky when I was in university-college, but not a lot. It wasn’t until I came to Hiram Walker where I here and gained an appreciation for all of the different flavours and all of the different things you can do to make whisky. The job probably got me into whisky more than anything.”

Although he has an affinity for Manhattans, in 25 years with the spirit, Livermore has adapted to the Canadian whisky lifestyle.

“I enjoy it many different ways,” he admits. “Being in Windsor, on a hot summer day, I’m not going to be sipping whisky neat by my pool. There are certain brands that we make, like the Wiser’s Deluxe, the Wiser’s Triple Barrel, Hiram Walker Special Blend – I like them with ginger ale as a nice cocktail or with soda in the summer.

“For 10 o’clock at night, sitting in my La-Z-Boy, I usually have it neat or with an ice cube or two – and it usually depends on which whisky it is. I find that the more rye I blend into the whisky, I tend to want an ice cube.”

Livermore says that there is a lot of enthusiasm and excitement for Canadian whisky at the moment, not just domestically, but internationally as well with Lot 40 Dark Oak recently winning the top rye whisky in the world at the World Whisky Awards 2021.

“I think that the category of Canadian whisky is poised to make a comeback, to have a renaissance, because we have a lot of versatility and can adapt in our style of whisky. I believe that this facility here, the Hiram Walker distillery, is one of the best distilleries in the world,” he states proudly.

Livermore says that it would not be a stretch to label Windsor “Whisky Town”. He says that he often deals with businesspeople and members of the media coming through the Hiram Walker distillery that end up in shock at the number of styles the facility can create.

“Canadian whisky is one of the most innovative, creative, adaptable styles of whisky there is,” he explains. “One part about being a master blender is being able to look into the crystal ball and wondering what is next. You’ve got to be able to listen to your consumer. That’s probably the hardest thing as a blender – to listen to your customer and ask, ‘What do you want?’

“I’m not making whisky for me. I’m making it for you.”

Livermore says that a previous boss of his used to call him “The Connector”. However, Livermore likens his job to being the maestro at a symphony. He acts as the intersection between the people inventing products, coordinating grains, the brewer, the distiller, the barrel purchaser – then he creates recipes with his whisky blender’s prescience.

He also feels the weight of history when it comes to being the Hiram Walker master blender. He is the keeper of history, the keeper of processes. “I have to remember each nuance and put it in for the next generation.”

His proficiency as a master blender eventually led to the LCBO asking Livermore to create his now-famous “flavour wheel”.

“I laughed and asked, ‘Do people really use those?'” he chuckles. “I put pen to paper, and I developed that wheel, and it’s actually trademarked in 170 different countries. I never thought that people would use it the way they are.”

The Canadian Whisky Flavour Wheel carefully divides the flavours of whisky into key components, like flavour notes and chemical composition.

“It’s a distillery cheat sheet if you want to call it that,” says Livermore. “Flavour for whisky only comes from three spots. It comes from the yeast, which is fermentation, from the grain, and from the barrel.”

“If someone wants different flavours, I manipulate those things. We’re very adaptable in what we can do, and that’s what makes Canadian whisky a very exciting category.”

Livermore is proud of his place in the history of Canadian whisky and the mark he has made at Hiram Walker & Sons.

“I think to be part of the history of this facility is an extraordinary responsibility,” he says. “Honestly, it’s awesome how important it is to the region, to society, the economics, and to be part of it. Shaping not only today but shaping the future when I’m long retired. What I’m putting away today will still be used, if you think about it, 30 years from now.”

“It’s such a storytelling opportunity and to be a part of that rich history and story is really cool,” states Livermore. He relishes the idea that in 30 years, friends will still be sipping and storytelling over the whiskies that he painstakingly blended and aged. “That’s the good part about whisky, the conviviality and moments with friends. It’s the storytelling, that social side of it – that’s the connection.”

For more from the maestro, follow Dr. Don Livermore on Instagram @cdnwhiskydoc. Life of a Master Blender.   To book a tour please visit the J.P. Wiser Tour site…. jpwiserstour.ca

Raising a child with autism