The many faces of mental illness 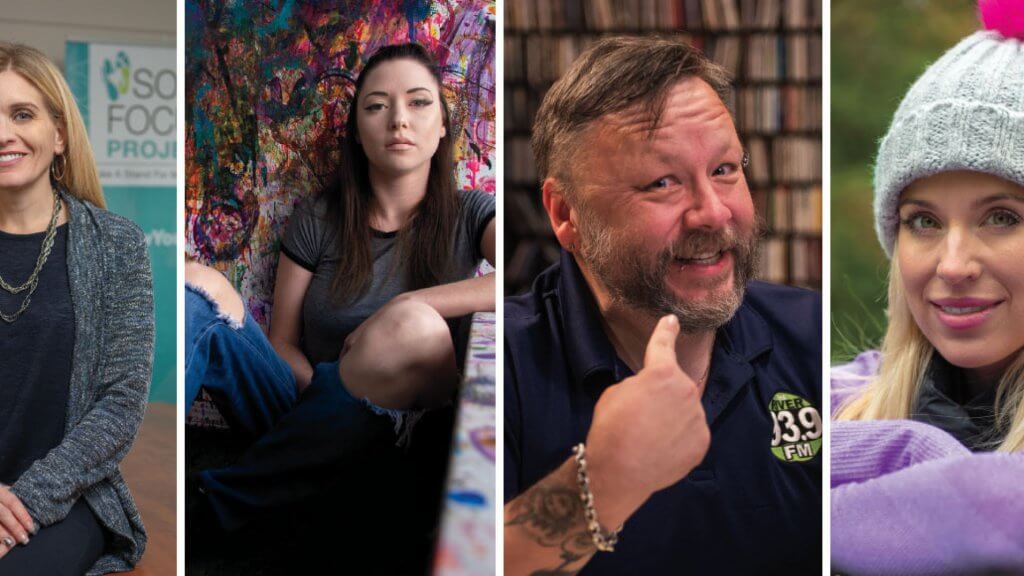 What does “mental health” mean to you? Is it seeking help from a professional? Taking medication? Maybe it’s a friend who motivates you. Maybe it’s your family. Or maybe it’s yourself

The following three CMHA (Canadian Mental Health Association) ambassadors want you to know who they are, and to help them fight the stigma of seeking help—whatever that may mean to you. Below, you’ll see the face of schizoaffective disorder, depression, and anxiety. But you wouldn’t know that, because what you see below are just faces

Stigma is defined as a sign of disgrace or discredit,

Which sets a person apart from everyone else

Stigma, drove me to think I was a monster,

This is the first stanza of Christina Foreman’s poem that she read for a CMHA event last March. Christina fights the stigma of mental illness by looking beyond it. And she invites others to see beyond the label of “schizoaffective disorder” that both she and her mother have been given

This has been one of Christina’s main struggles: labelling herself based on how she thinks others view her. Instead, Christina reminds herself that she is more than her diagnosis. She is: Creative. Warm. Giving. Empathetic.

Schizoaffective disorder is schizophrenia with a mood component, which can often be unpredictable

Christina has lived surrounded by mental illness for the majority of her life, as she watched her mother experience a similar unpredictability in mood. Even though her mother can be aggressive one day, and calm the next, Christina sees her mother for who she is: strong and persistent

Growing up with her mother has instilled a passion in Christina to show the public that “just because you’re diagnosed, it doesn’t make you a monster or dangerous,” she says

Supports came flooding through the gates

And off me came all the weights

Once I accepted the help I needed

Self-love, security, and trust were seeded

I fought this disease with all the strength in me

Then and now, I don’t find it easy

I realized this disease is only going to make me stronger

Especially when I fought it, longer and longer

In 2018, we are still judging others for needing assistance, whether that be therapy or medication. Christina puts it into perspective, saying that if we have a friend who has diabetes, and they needed to take their insulin, would we say to them, “Is that really good for you? Are you really going to take that?” Medication helps them, and they need it to survive. It’s the same with mental illness

When she was beginning her treatment with CMHA, Christina was feeling disconnected with reality, and had no hope at all. She gave up on herself and thought she’d never get better

“Without all of the help I’ve received from CMHA, I wouldn’t be in this place. It’s been the biggest gift of my life,” she says about the occupational therapy she has received

Christina’s treatment includes one-on-one meetings with her nurse case manager, where Christina addresses if she’s received any messages from her TV, seen any hallucinations, or if she has had any thoughts of self-harm

Aside from CMHA, Christina taps into her creative outlets to help her work through her racing thoughts. She uses the many emotions that have come with having schizoaffective disorder and portrays the feelings in her writing and poems

Every day for Christina is a battle, but she says she can win that battle just by being alive. When she’s in a dark place, she remembers that “loving herself” comes first, and that she needs to believe in herself. She is constantly saying “I am worth it.” No matter what anyone says, she knows that she deserves the help.

It’s a forever fight that you can win

And when you do, life can begin

I needed to forgive myself for the past

Now when I look back, I can see the contrast

I want everyone to know that you are not insignificant

You may have heard his distinct voice while listening to 93.9 The River, and feel like you know Greg Gnyp. But would you have known that he lives with depression?

No, he says, because you don’t look at somebody and know what depression looks like.

Greg says that he wasn’t necessarily in a place of “I want to die.” But, there were moments where he would sit on his beautiful porch with his dogs, with a glass of whiskey in hand, and just not care if he was alive

He asks me if that makes sense, but mental illness doesn’t have to make sense; it just is

Greg expressed his depression to others over Facebook, after the suicide of Chris Cornell, the lead singer of Soundgarden. He posted, “I have always been the DJ who just smiled, laughed, drank, and made others laugh, while I saw a strange blank slate in front of me. Last year, that slate boxed me in for four months…”

In response to his post, someone commented, “Just go out there and smile!”

Well, that’s what Greg always did. It was his job to smile through the pain every single day. He explains it as someone telling you to paint a wall, but the wall is still decaying, it’s just covered up

“Depression is such a great liar—it’s one of the ultimate liars in the world. You can have a big house, a beautiful family, an amazing car, and everything you’ve ever wanted. But depression tells you that you don’t deserve it. No. It’s the mental illness you don’t deserve. You do deserve everything else,” he says

Greg kept his depression hidden for so long that he couldn’t even admit to it himself. But now, working alongside CMHA and Bell Media with the “Bell Let’s Talk” initiative, he uses his voice and humour to bring listeners even just one moment of happiness each day. He says that everyone has to put down the jazz hands that cover up the conversation, and just talk about it

He talks to his friends, his sister, and the public.

Greg says he finds hope from this same flower that pops through the crack in his cement. There’s been salt and weed killer sprayed, but every year that flower still comes out. The flower says, “Screw you, it rained and now I can grow.

“You can be like that flower,” he says. “Just get through the cracks, and there’s something nicer on the other side.”

Jasmine Jasey become involved with CMHA two years ago, after the first time she posted publicly about her mental illness on Facebook. Along with a single photo of herself, smiling happily, she wrote, “This is my picture of mental illness: panic attacks and anxiety. You don’t always know what’s behind a photo.”

Seeing her speak openly about her mental health, CMHA contacted her to become an ambassador for educational purposes in schools and in the workplace

For Jasmine, speaking to younger ages was crucial. “If I had known what was wrong, or what was happening to me in the fourth grade, it could have helped me sooner. At the time, I felt so alone. So isolated,” she says. Jasmine hadn’t worked on this healing until she was in her twenties. So, she jumped at the opportunity to provide early intervention in schools

Growing up, she didn’t think people would believe her if she spoke out, if she said she couldn’t breathe. But now she knows, that’s not how to handle a child with anxiety. Instead, Jasmine says to them, “I believe that you’re feeling this way. I’m going to help you figure out the steps that you need. That must feel awful.”

By validating these feelings and allowing them in instead of blowing them off, Jasmine helps children get through it

“You need to imagine how they’re feeling. They truly feel that they can’t breathe. They feel dizzy. Having someone who is patient, kind, loving, and positive in their life can help them work through it sooner.”

Now, Jasmine knows what she needs on a daily basis to help her get through, and sometimes that’s just to complete one small challenge a day. Sometimes it’s as simple as getting in the car and driving to the store. She sets a goal for herself, and she just has to make it halfway. If she only gets three items at the grocery store, she knows she can go back the next day to get the rest. Whatever she does is enough

And she always makes sure to speak kindly to herself. She can always do more the following day. She needs mental wellness in order to be a good mother, a good wife, and mostly just for herself.

For her, as for all of us, mental health is everything

CMHA launched the “Sole Focus Project” in 2017 to educate, enlist, and engage the community. By letting everyone know which resources are available to them, they hope to address the stigma of mental illness. This social media campaign is about engaging the thousands of community members so they know where to go, who to talk to, and to become better informed

Kim Willis, director of communications and mental health promotion at CMHA, says that this statistic is on the low side. She has seen about 1 in 2

“It’s an illness just like any other. Brain health is equally as important, as there’s no health without mental health. It’s important to know the resources found within the community.”

Check in with yourself every day, figure out which outlet works for you, and always seek help. You are not alone. We hear you

Let’s talk about it.

Join the Sole Focus Project movement and take a stand for mental health as we collectively create a legacy fund to further enhance and distribute mental wellness education, awareness, and training in our community, and ensure the sustainability of programs not funded by our government.

• 14 people die every day in our community

• On average, up to five people are affected by each death

• Over 25,000 people in our community are dealing with the loss of a loved one

• 90% of people with depression will never seek treatment

• 11 people die by suicide every day in Canada