After four decades practicing law in Windsor, the venerable defense attorney shows no signs of slowing down
Author: Matthew St. Amand
Photographer: Syx Langemann
12 months ago
|
No Comments
Share On 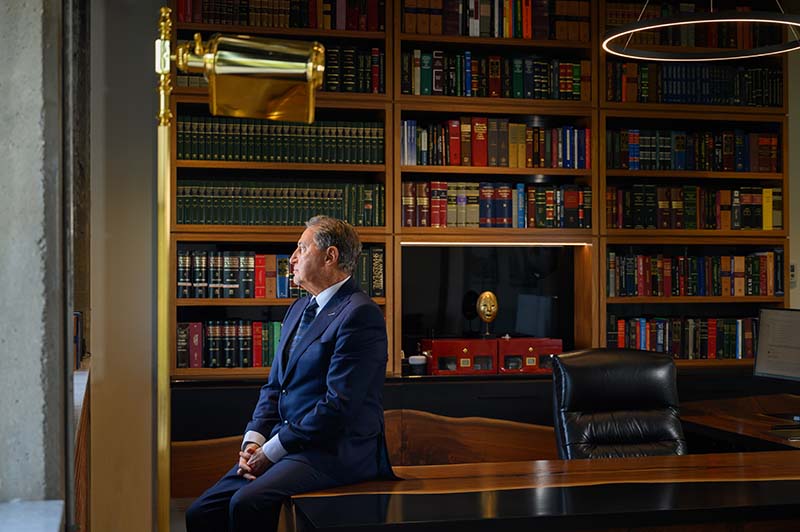 Only the surreal terrarium of Windsor courtrooms could cultivate a contrarian teenager—fighting traffic tickets—into one of Canada’s foremost criminal defense attorneys.

“From my teenage years, I thought about being a lawyer,” attorney Patrick Ducharme explains.  “It goes back to when I started to drive, I got a few tickets and went into court and fought them myself and loved the process.  It wasn’t so much beating the ticket—I didn’t beat them all—but I enjoyed showing up and making an argument.”

He continues: “I was a contrarian from the beginning of my life.  My older brother, Edward, was amazed that I knew what I wanted to do with my life from such a young age.”

After 40 years of practicing law, teaching at the University of Windsor’s Law School, after arguing cases in court houses around the province, and even before the Supreme Court of Canada, Patrick Ducharme shows no signs of slowing down.

“I’m just warming up,” he says with a laugh in his plush office in the newly renovated Walker Power Building on Riverside Drive.  “I have no intention of retiring.  I still love what I do.  If anything, I’m thinking, ‘Let’s move this to a higher bar.’”

He is also sharpening his focus and taking stock.  After 40 years teaching part-time at the University of Windsor’s Law School, Patrick has decided it’s time to move on.

“I’ve been honoured to teach there all these years,” he says.  “I made the decision on my own.  I’m reshuffling priorities and think it’s time to focus on other things.  Four deans came and went during my time.  I had a lot of fun there.”

What really motivates Patrick is a challenge.

“The more difficult the case, the bigger the challenge,” Patrick says.  “People come in and say: ‘I did what they said.  Here are the reasons.  Here is what happened.’  And you have to understand, people don’t get charged with murdering another person without there being more than a significant amount of evidence of their culpability.  I love cases like that.  I always have a murder charge on the go.”

He goes on to explain that it’s not about maintaining WINS/LOSSES columns.

“I take on the most difficult cases, ones that some lawyers would shy away from,” Patrick continues.  Which, at times, produces headlines in local media, such as: “Judge rejects rare defence that accused unaware of rifle in his pants.”

The heart of the Canadian justice system is a presumption of innocence on the part of the accused.  Defense attorneys are mandated to provide their clients with a vigorous defense.  Just because the accused admits his guilt in Patrick’s office does not obligate Patrick to roll over in court for the Crown.

“My position is,” Patrick says, “if the Crown is charging a person with first degree murder, they have to prove their case.”

Movies and TV shows involving lawyers inject their stories with a certain amount of a swashbuckling, when in reality the practice of law is comprised of many tedious hours of reading and reviewing cases and testimony.  That said, Patrick has found himself in the middle of many high profile, high stakes cases.

He has also handled high profile clients, such as former Detroit Red Wing, Bob Probert.  Probert’s problems with drugs and alcohol were well documented in the press.  The NHL tough guy was as colourful off the ice, as he was on it.  His association with Patrick Ducharme was fortuitous.  Not only did it help Probert dodge some consequences for his off-the-ice antics, but more importantly it positioned Patrick to be on hand when Gil Stein, president of the NHL hosted a forum in Toronto about the league’s drug policy.

It was later summer of 1992, only weeks after the drug-related death of John Kordic, another of the league’s enforcers.

At that time, the NHL’s drug policy left players no option for coming forward with their problems.  According to an August 24, 1992 Sports Illustrated article “Death of a Goon”, sports reporter John Sher wrote: “If you get caught using marijuana or cocaine, the NHL might ban you for half a season for the first offense.”

Sher went on to report: “Stein defends the league’s tough stance on first offenders, but he concedes that the thought of losing a key player for 40 games might prompt a coach to think long and hard before undermining his own job security.”

Patrick attended that late summer forum and was so incensed by the NHL’s inadequate drug policy, he stood up to speak.  According to Mark Zwolinksi, in his book The John Kordic Story, Patrick told the audience: “The hallmark of addictive behaviour is denial.  Kordic admitted he was an alcoholic, but he didn’t dare say he was a drug addict… he couldn’t do that.”

Patrick continued: “This isn’t a policy at all, it’s simply a ban.”

NHL legend, Darryl Sitler was in the audience.  His son was recently drafted into the league.  Sitler voiced his agreement with Patrick’s perspective.

Patrick then drafted what he felt was a better drug policy, hoping that the NHL might take a few of his ideas, and make it easier for players to come forward and ask for help without fear of losing their contracts.

Sometimes, society recognizes that it needs its contrarians.  Not only needs them, but on the rarest of occasions, acknowledges them.  For this reason, it’s ground-shaking news that the Criminal Lawyers’ Association has selected Patrick Ducharme as the 2021 recipient of the G. Arthur Martin Criminal Justice Medal.  The award will be formally presented on November 20.

Up to this point in the award’s 32-year history, only two practicing lawyers based outside of Toronto have received it: Donald Bayne of Ottawa in 2006 and Richard Peck Q.C. of Vancouver in 2014.  Now, Patrick Ducharme of Windsor, Ontario in 2021.

According to the G. Arthur Martin Criminal Justice Medal press release: “What has distinguished Patrick Ducharme’s contributions to criminal justice in Canada is his enduring commitment to legal education.  For 40 years, Patrick held a position as a sessional lecturer at the University of Windsor, Faculty of Law, teaching both Criminal Trial Advocacy and Criminal Procedure.  During that time, he taught approximately 3500 Windsor Law students.”

Current CLA President John Struthers stated that “Mr. Patrick Ducharme is quite simply an inspiration to defence lawyers across Canada. Hard work, perseverance, courage, and collegiality are the trademarks of his practice.  He has inspired generations of lawyers through his teaching and mentorship.  While I personally believe defence work is the pinnacle of the legal profession, Mr. Ducharme has achieved the summit. We are so very proud he has accepted the G. Arthur Martin award in recognition of the universal respect and admiration of the entire justice system.”