Yes, the patriarch of the Herman football dynasty is still kicking
Author: Devan Mighton
Photographer: Syx Langemann
1 month ago
|
No Comments
Share On 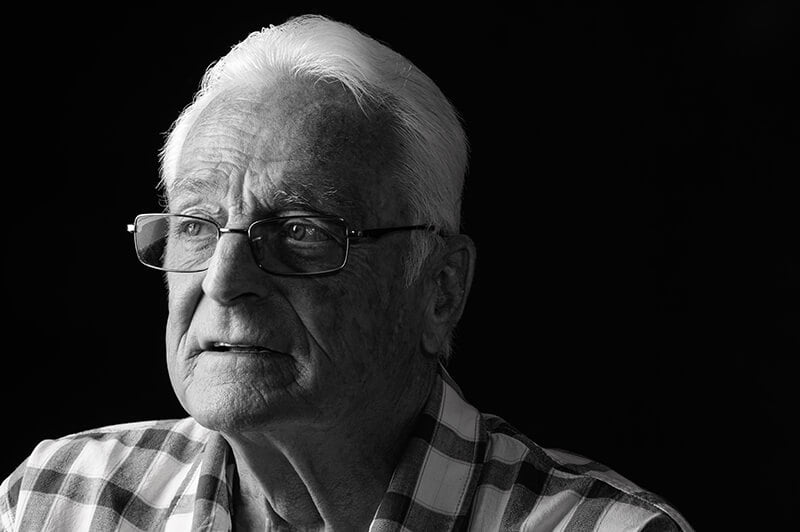 At W.F. Herman Academy, the Griffins football team has a saying: chicken soup.

“All chicken soup means is that you might as well blame whatever excuse you are going to give to me, for anything, on chicken soup,” says longtime Herman football coach Harry Lumley. “One excuse is the same as the next. Whenever anybody makes an excuse in practice or a game, you hear a chorus of guys going, “Chicken soup!” It tells the kids right away, forget the excuses.”

With 56 years experience, the septuagenarian Griffins’ coach knows a thing or two about accountability and success. In 31 non-COVID or strike seasons, he has led Herman to 24 city championships.

When asked why he was drawn to football, he jokes that he enjoys the brutality.

“When I was a kid, I loved all sports. It didn’t matter what it was,” he says. “Peewee football was right in its beginning stages when I was a kid, and I loved it, so I started playing and coaching at the same time.”

He says that in his youth, he played football and coached baseball at the same time, but hockey was his favourite.

“I was in all of them but no good at any of them—that’s why I went into coaching,” laughs Lumley. “I was a Jack of no trades really, but I learned a lot and that’s how I learned that I loved coaching.”

His first foray into coaching came at 14 years old. “We had a baseball team when I was about 14 and we raised a lot of money selling little bags of peanuts for our uniforms,” recalls Lumley. “The guy who was in charge of our team took off with all the money and left us stranded. We had no uniforms, the team was going to disband and I said, ‘Bullshit, we’re not disbanding. I’ll take the team.'”

Coaching his friends, including close buddies Bruce Belland and Rick Bauer, he says they were all pretty tough nuts. “We used to fight a lot in those days,” he admits. “I don’t know why that hasn’t continued with kids, but I used to fight all the time.”

His struggles molded him. Born in 1945, he says his youth was affected by the divorce of his parents. In high school, he just stopped attending and was subsequently kicked out of four of them. When Lumley started attending Herman, he met his mentor, legendary coach Godfrey Janisse.

“He was unbelievable; I am so loyal to Godfrey Janisse,” states Lumley. “If it wasn’t for him and my brother, Ed, I don’t even want to say what would’ve happened, but I know I wouldn’t be around.

Godfrey convinced him that after he finished high school, to return to coach football, and after a short stint at F.J. Brennan, Lumley returned to Herman to work with Janisse in 1967. The pair have worked with each other for an eternity, despite Janisse taking stints at Walkerville and Massey and Lumley having a very successful run with Kennedy. They both eventually came back—Lumley to coach his own stepbrothers.

“It’s easy when you’ve got good kids,” muses Lumley. “I had a real affinity for kids that were hard to handle and were in trouble—because that was me when I was younger! We built a really good rapport with the kids. They worked hard and we started winning, and the word “tradition” always comes into it—nobody wants to be a team that loses.”

Lumley says that a point of pride with Herman’s football program is that of the 64 coaches involved with the team, in his time, all but two were Herman grads. He notes coaches Gavin MacDougall, Gerald Lewis, and John Thrasher among his returning alumni.

We all knew the system, we’d been running the same system for 40 years or so,” he explains. “When you have great coaches, it’s fun for everybody. The kids listen because they know we know what we are talking about.”

“We worked really hard, we put a lot of time in, and the biggest thing was, I surrounded myself with really good coaches—really good people.”

Lumley says that he is always getting asked what his best team was and he says that there were so many that he can’t keep track.

“The biggest highlight was probably the very first time they had an OFSAA championship in the Skydome,” he recalls. “We went down and played a team that was ranked No. 1 in Canada by All-Star Recruiting—a team called London Catholic Central. They were absolutely loaded. Big, strong kids that went on to win a couple championships with Western. They were supposed to beat us pretty bad and we beat them 28-0. We just totally dominated the game.”

He says a number of players from that team went on to receive scholarships, including his own son.

Lumley adds that winning the city championship was usually the biggest challenge and looks back fondly with his team’s wars with Holy Names and Kennedy.

“We never seemed to have a bad team and everybody plays,” states Lumley. “We don’t play the same kids over and over. We don’t have to rebuild, we just fill in the blanks at the end of each year.”

“Getting kids to the next level is all we care about. Winning just seems to come along with it.”

The Sweet Hum of Pollinators