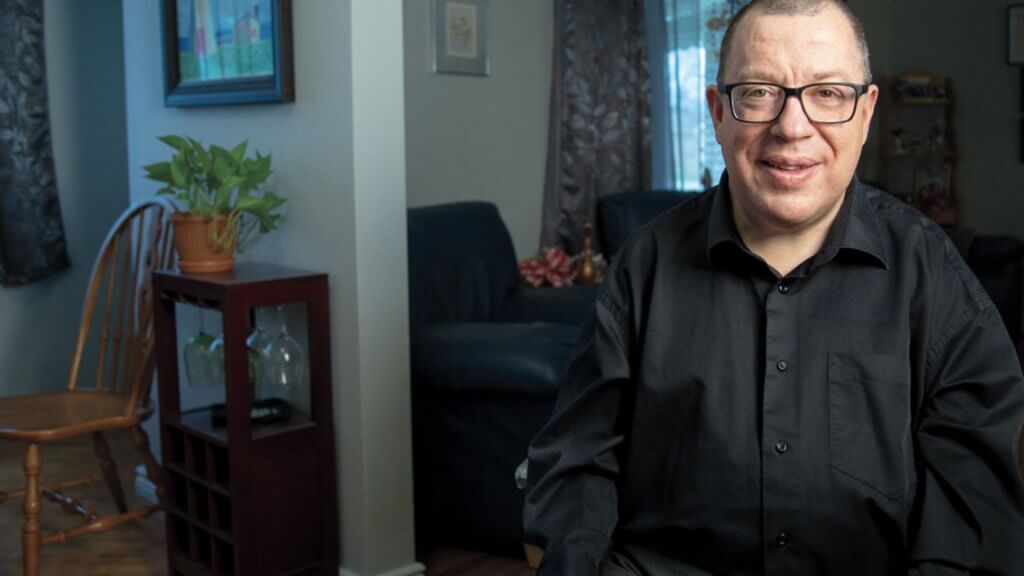 Being up on the TEDx stage was a 2018 goal for Dave Dame. He had worked on his talk for four months, weaving in different elements of his story

The talk couldn’t all be about “Agile,” which Dave describes as a framework he uses with businesses that helps organizations build products and services that people love and can’t live without. The focus had to go beyond inspiring leadership. And it had to be more than his cerebral palsy, because his CP doesn’t define him.

No, crafting his talk meant touching on all three. If he didn’t, it wouldn’t give a good indication of why he was up on that stage.

Dave wanted to show his audience the combined effort that it took to get here, how he pushed through the challenges of being unable to speak as a child, how he improved a workforce that wasn’t ready for a person with CP, and how to inspire leaders to become the change they want to see

And that along the way, he couldn’t let himself forget the struggle it had taken to get to this point

“Instead of me always being strong, this was about me being ready to be vulnerable,” Dave tells me in our interview

Everyone has a shield up, Dave says, and he wanted to break through.

This meant identifying everyone’s individual struggles, connecting with them, and getting his audience to forget that wall in front of them, to help them move forward

Dave asked his TEDx audience to make eye contact with the person next to them. The audience began to laugh uncomfortably. Still, he asked them not to break eye contact. He wanted the feeling of vulnerability to sink in.

In a different moment, Dave asked his audience to imagine that two days after hiring an employee, that employee had to see you naked. When Dave hires an aid, this is exactly what he must do. He must break through barriers quickly and entrust this new person with his life.

He explains this as a key component in his “Agile” philosophy—when Dave is working with companies that are looking to create life-changing products, the leader needs to face this same kind of vulnerability. We no longer live in a world where left-brained logic rules; we, as consumers, now search for products that have an empathetic and social benefit. In this case, a leader must cut through the falseness, apply empathy into the workplace, and become genuine quickly in order to see results

He says leaders must learn to become one with the people by disclosing their own struggles. If their employees learn about these mistakes, they will be more likely to try new things, make mistakes of their own, and will truly back up their leaders. In other words, the very vulnerability the employer demonstrates can become his or her biggest strength as a leader

“When someone becomes a leader, everyone thinks they had it easy or they were born with some ingrained magical power. But the truth is, they struggled themselves,” Dave says. “This is what I learned as a leader with a disability. When I was younger, I tried to mask my disability and my struggle with the simplest of things. But I learned that when my people got to see me live with this imperfect but valuable life, they saw that they too could be imperfect. That their flaws and weaknesses could shine, and they could bring their best selves to work. They’re focusing on what they’re doing instead of what they’re trying to hide behind. If leaders make it open that they struggle too, it makes it okay for everybody to struggle.”

Dave has switched his careers a few times from advertising to development technology to leadership, and says the greatest thing is to learn something new. You get to be imperfect and are able to grow by rediscovering something about yourself. When we become a specialist in one field, the enjoyment of growing is lost

“Life is too short to end learning in your twenties or thirties, where you narrow or converge on one thing that you want to be known for,” he says

He explains that the more we become good at one thing, the less we find it okay to be wrong. This is how we forget what got us to that point of success, and we become afraid to not be good at other things. Dave says that he can deal with failure, but regret is something he can’t live with. This is why he takes these chances and pushes his boundaries

Because when he did, in completing this TEDx Talk, he received the second standing ovation in four years of TEDx history. For a guy who can’t stand, Dave was able to make 1,700 people do exactly that

In 2019, he’s pushing himself to finally write his book. “In order to live an ordinary life, sometimes it takes an extraordinary effort, but it’s well worth it,” he says

Dave encourages anyone who is looking to push their own boundaries in the New Year that even if it doesn’t catch right away, and you do quit, don’t think of it as over. Reduce the time it takes to pick it back up, and that’s when it will become a habit

A formed habit is the pursuit of making it a habit, and a series of failed attempts.

Dave says that if he wanted someone to walk away from his talk with anything, it’s that “the world is imperfect but if you can continue to live with that imperfectness, there’s something rare and sweet that comes out of it. Don’t worry about the life you wish you had; appreciate the one you’ve got.”

You can watch Dave Dame’s TEDx Talk on YouTube: Sprinting with Cerebral Palsy

The Pandemicist at Home: How Dr. Wajid Ahmed stays sane in the time of Covid-19