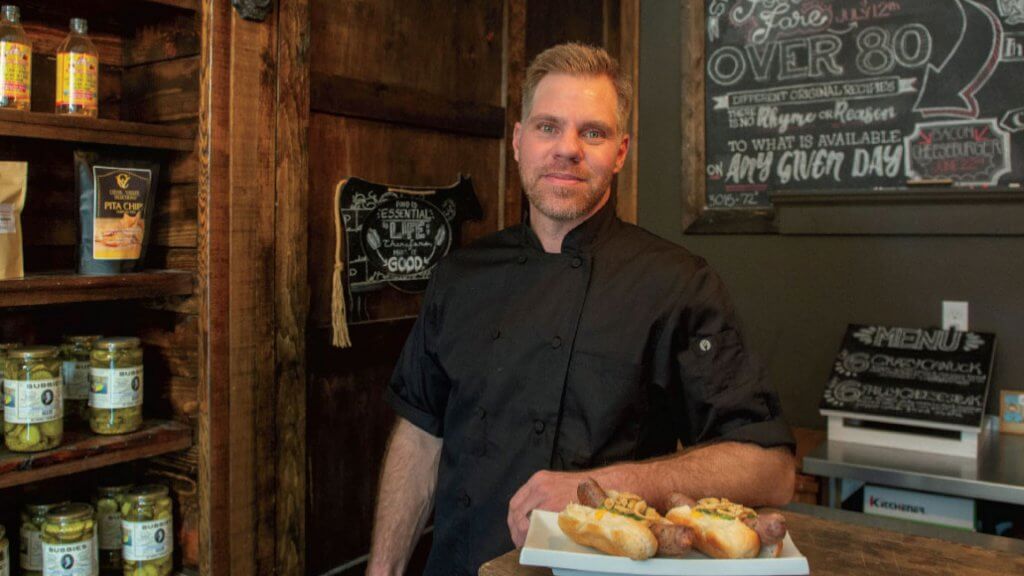 “It was always after Christmas,” said Ric Albano, a look of nostalgia washing over him. Although we sat face to face in his custom-built home cantina, Albano’s mind had wandered to the late nights of his childhood, crafting handmade sausages in his family home. He painted the picture vividly: his mother’s house still dressed in the festive colours of the holiday season, the excited chatter of his extended family as they worked together in this rich tradition, and the slight sinking feeling that this was their last get-together before the school year recommenced. “As a kid, what I was able to help with was very limited, but I always kept a watchful eye knowing that one day, when I grew up, I was going to carry on the tradition.”

The craft of sausage-making was implemented centuries ago not as a culinary art, but as a means of food preservation. In its most primitive form, the sausage was created to move the fifth quarter—the leftover cuts of the meat. It was adopted by various regions globally, each one creating its own iteration from the Argentinian Longaniza, the Austrian Vienna, and the German Frankfurt, to name a few. Albano’s family had immigrated to Canada from Calabria, a southern region that is known as the “toe” of Italy’s boot-shaped peninsula. Born and raised in Windsor, Albano holds his Italian customs near to his heart. Continuing the tradition of sausage-making has now evolved into an annual affair with friends and family. “We’re growing to be a disconnected society in a lot of ways,” said Albano. “This is my way of reconnecting and I’m dragging good friends and family into it.”

Upon entering his cantina, I was met with rows of soppressata, a cured sausage that’s traditionally made in the colder regions of southern Italy. They were stacked neatly, side by side, and I took a moment to snap a few photos; I had never seen anything like it. Albano beamed with pride at his creations. “The mold is part of the curing process, in case you were wondering,” he said, referring to the mold that grows on the sausage that is peeled off before eating

Soppressata must be made in the colder months. “Part of the process is weather-dependent, because we are dry-curing it,” said Peter Rino, a local engineer and sausage-making hobbyist who has been making soppressata with a group of friends for the past seven years. “The temperature needs to be cold so it’s got to be the coldest time of the year.” Growing up in Sault Ste. Marie as the son of a butcher, Rino watched his father make sausages, but the young boy never showed much of an interest in the practice until he was older. Then he began watching the process more closely, which included course-grinding pork and blending it with a mix of spices and salt before filling the casing. “How much salt?” I asked Albano as he explained the intricate process. He smiled back sheepishly and said, “That’s the secret.”

The art of the artisanal sausage lies in the combination of added ingredients and their ratio to one another. Some like to play around with the combination, creating a new sensory experience from the traditional soppressata, while others, like Rob Isshack and his childhood friends Tony Montaleone and John Geraci, stick to the originals. “If it’s not broke, don’t fix it,” said Isshack, referring to the Montaleone family recipe that has been passed down for generations

The process of creating the actual sausage takes a couple of days. Once the casings have been filled, the sausages are then hung up to dry. “The drying process can take anywhere from six to eight weeks,” says Rino. At this time, the sausage must be stored in a temperature-controlled room during a process called “cold curing,” where they will remain until maturity. “Being a sausage maker, you can attest to the fact that there is global warming,” said Albano. “When I was a kid, we used to make our sausages in the winter and they would stay strung up in the cantina all year. The Earth wasn’t as hot back in the day. In the ’70s and early ’80s, that’s when we started noticing that we have to shrink-wrap them and put them in a cooler. It’s progressively gotten worse. So, I stand by the environmentalists.”

Although the process of sausage-making comes with some rich, cultural significance, it’s the camaraderie that keeps people coming back for more. The tradition is being carried on generation by generation in this growing movement that has evolved into a collaboration that spans across different cultures and palates

The concept of collaboration in this culinary craft is one that is not lost on Rob Bournais, owner of Robbie’s Gourmet Sausage Company. Bournais began studying the technique of sausage-making after a particularly delicious chorizo sausage in a Mexican resort. He came home with the intention to recreate it. Batch by batch he infused his creations with rich herbs and spices and his passion quickly turned into an obsession. A formal culinary education wasn’t in the horizon for him, so Bournais took matters into his own hands, studying The Professional Chef, an instructive resource written by The Culinary Institute of America. “I asked my artist wife, ‘How did Picasso get away with a nose here, an eye here, an ear here?’ She said first, he learned how to paint a bowl of fruit,” he explained. “So first I learned the classics—the mild Italians, the Germans, the hot Italians—and that’s where I learned that there are people in Windsor who have been doing this forever and they’re doing a great job. That’s not my spot in this world; my spot is to do something unique. I learned off their shoulders and I just kept going further, always trying to push the envelope—to be different and unique.”

Bournais’s chorizo earned him every single award in the Great Canadian Sausage-Making Competition amateur category and was named best in Canada for that year. That’s when Robbie’s Gourmet Sausage Company was born. Tucked away on the corner of Wyandotte and Gladstone in Windsor’s historic Walkerville neighbourhood, Robbie’s Gourmet Sausage Company became the first artisanal sausage shop in the area. He’s since created 89 unique recipes, with the help of local chefs in a collaboration he likes to call the Master Chef Sausage Series (which can be viewed on the WindsorEats website). “We feature a chef, we create something together, and we put it out there, something totally creative and unique.”

Bournais prides himself not only on his uncommon flavours, but the fact that his sausages contain only a fraction of the fat found in sausages at the big-box stores. “We figured out the mathematical equations—the proper amount of dry ingredients, wet ingredients, the amount of fat—and I realized you can take a lot out,” said Bournais. “Our sausages are 75 to 80 percent lean whereas grocery store sausages are 35 to 60 percent fat. I have too much respect for my customers to do that.” Health factors are a driving force for many of the sausage-making hobbyists I spoke to, touting the benefits of using organic ingredients, grinding fresh hormone-free meat, and ditching the preservatives to provide a healthier sausage for their friends, family, or clients

The unique flare of customizing your own sausage is what launched this new wave of artisanal sausage-makers to continue to push the envelope and experiment with uncommon flavours, something to which Ethan Desante, from The Butcher of Kingsville, can attest. Their full-service butcher shop prides itself on creations that vary from traditional recipes to globally inspired ones. “People basically travel with their mouths so it’s pretty interesting to see the turnout for every sausage,” says Desante. “We see a different group of people for every kind of sausage that comes out.”

But why sausage? As a butcher shop, there must be various cuts of meat you can experiment with, season differently—what is it about the sausage that’s put it in the spotlight? “It’s an open format, an easy format and an affordable format in which to taste new things,” he explained. “It’s the most affordable way to experience different flavours or styles.” Each country, each region, has a different way of preparing this food. Composed of various meats, spices, and seasonings, each sausage can transform into something completely different than the one before it.

The rise of the artisanal sausage comes as a natural progression, a culinary revival of a time-honoured tradition. Windsor-Essex is recognized as one of the most culturally diverse communities in Canada and our cuisine is a direct reflection of that. From taste innovators like Bournais and Desante to traditionalists like Albano, Isshack, and Rino, local artisanal sausage-makers are evolving their flavours into a culinary mosaic

As for the future of sausage-making? This wave is just getting started. “When my parents came here, they were going to the back doors of the butchers because the selected cuts just weren’t there,” said Albano. “Now, in Windsor-Essex, it’s all here. It’s amazing.”