From Windsor to Paris 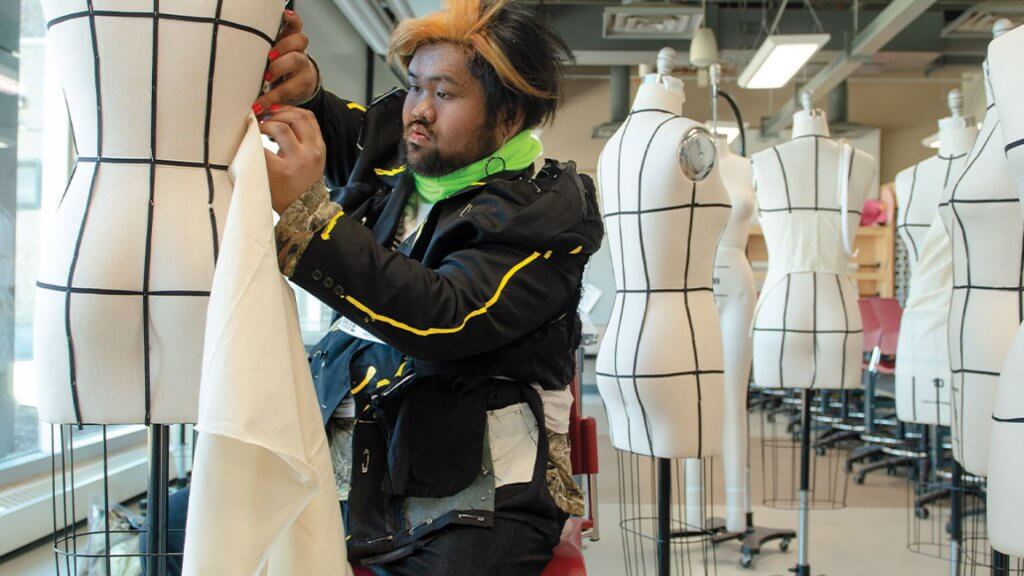 Recently a talented, up-and-coming, fresh out of school fashion designer received the invitation of a lifetime: to make his international debut at Amazon Fashion Week Tokyo. An invitation he shockingly declined

That designer was Jhon Roncal

In his own defense, he says, “I didn’t have enough time, I wouldn’t have slept!” To be fair, Japan’s biggest fashion show was taking place less than three weeks after Vancouver Fashion Week, and to do both Roncal would have had to design an entirely new collection.

Though Roncal may have said sayonara to Japan, he’s set his sights on a loftier destination. These days when the 20-year-old Philippines expat isn’t designing you can find him… actually, he’s always designing. For the last few months he’s spent every free moment waist-deep in bamboo and organic cotton. He’s immersed himself in Bloodmoon, a collection he will be presenting when he returns to Vancouver Fashion Week in just a few weeks’ time—a collection that, if good enough, just might take him to Paris

No pressure at all

It’s hard to believe that just a few years ago, Roncal was the one almost getting kicked out of fashion shows, not the one on the cusp of presenting his second collection.

“As teenagers, my friends and I would sneak into Toronto Fashion Week and get in trouble by security,” Roncal said. “I just wanted to be in the fashion scene and learn something from that experience. It was so incredible to see local designers who had made it big.”

Roncal, who moved with his parents from the Philippines to Toronto in 2010, didn’t even begin to take fashion seriously until his last few years of high school. And it was a gaping hole in the industry that sparked his interest and made him seriously consider pursuing fashion as a career. “I hadn’t seen any clothing that didn’t focus on gender and I thought, maybe I can start a new perspective in fashion where there is no gender in garments.”

According to Roncal, there should be no boundaries when making fashion. His own personal style is anything but low-key. Mixing techwear with streetwear, Roncal eschews the rules of fashion by wearing the unexpected: women’s wide-legged trousers and ’90s-era oversized blazers, accessorized with a Chanel brooch or a pair of vintage earrings

Does Roncal have anyone in particular in mind when designing? “A guy who is confident enough to put on a skirt and has a bunch of feminine pieces in his wardrobe. Or a girl who wears pants and a hoodie and couldn’t care less what people think of her. People who wear the things they love instead of that which society deems as appropriate.”

In 2016, Roncal packed his bags and made the move to Windsor when he was accepted into the two-year Fashion Design Technician program at St. Clair College. From costume design and tailoring to pattern drafting and product development, Roncal embraced the school’s hands-on approach to teaching and was effusive with praise for his instructors as they were in return. “Jhon began to shine quite early,” said Elaine Chatwood, the program’s coordinator. “His first-year designs were some of the strongest in that group. He stood out from day one.”

Though he took second place in the program’s year-end Atelier Fashion Show, his graduation collection inspired by corporate America, received accolades from his instructors and praise from the judges, including designer Stephen Wong of Greta Constantine and Project Runway Canada fame.

When Chatwood was approached by a rep from Vancouver Fashion Week to nominate one graduate from the last three years to present a collection for Spring/Summer 2019, she didn’t hesitate. “Jhon’s background and knowledge of art and fashion, along with his ability to interpret high-level trends, was very impressive for a designer so young,” she said. “He was one of the most hardworking students we’ve had, and his work ethic was excellent.”

Roncal’s personality-rich clothes aren’t exactly ready-to-wear. His brand, Notre Décès – French for ‘Our Death’ (‘Mort’ “wasn’t bougie enough”), made its West Coast debut in the New Designer runway show with a collection inspired by his Filipino heritage. Titled ‘Maharlika,’ which means beautiful in Tagalog, the show illustrated his take on streetwear with an elevated twist: deconstructing formal wear into something “out of this world.” That translated into staunch-faced models who sauntered down the runway in a reconstructed blazer splattered in paint; a hole-punctured sweater worn like a Miss America pageant sash; a poncho made with up-cycled and recycled denim jeans—it was a layer-lover’s paradise. Roncal spent three months working on the collection and constructed (or deconstructed) 32 pieces in total

A gender bending collection that challenged the constructs of traditional tailoring, his collection was definitely for the individual who wants to be noticed. And noticed it was.

“Jamal Abdourahman, the founder of Vancouver Fashion Week, really liked my collection and introduced me to a bunch of editors and buyers.”

But not just any old editors. “Elle Russia and Nylon magazine did features on the line as did Hunger magazine. It was amazing but at the same time I was so nervous meeting these higher-ups in the fashion industry,” Roncal said. “I put my heart into this collection so receiving this kind of recognition was very important to me. And they saw my vision and I was just so happy to know that they liked it.”

Just when the whirlwind of Fashion Week had started to subside and Roncal was beginning to breathe normally again, he received that now-infamous summons from Abdourahman to present his collection at Amazon Fashion Week Tokyo as part of Global Fashion Collective

Instead, Roncal accepted his invitation to return to Vancouver as a sponsored designer for the next three seasons. And this time around, he’d do things a little differently. “I’ll be more prepared! I won’t be so nervous if I’m introduced to an editor from Vogue.”

And if his Bloodmoon collection is as good as his last, Roncal just might receive another phone call from Abdourahman with an offer he can’t refuse: the opportunity to showcase his collection at Paris Fashion Week.

At the time of this interview, Roncal is running on no sleep, in full design mode preparing for the fast-paced frenzy of Vancouver Fashion Week. He spends his days working for a fabric supplier and his nights (and much of the early mornings) designing—one trench coat alone has taken him more than 100 hours to make. But the relentless workload, long hours, and frantic deadlines are all worth it to Roncal. “This is all for Paris. I wouldn’t have it any other way.”