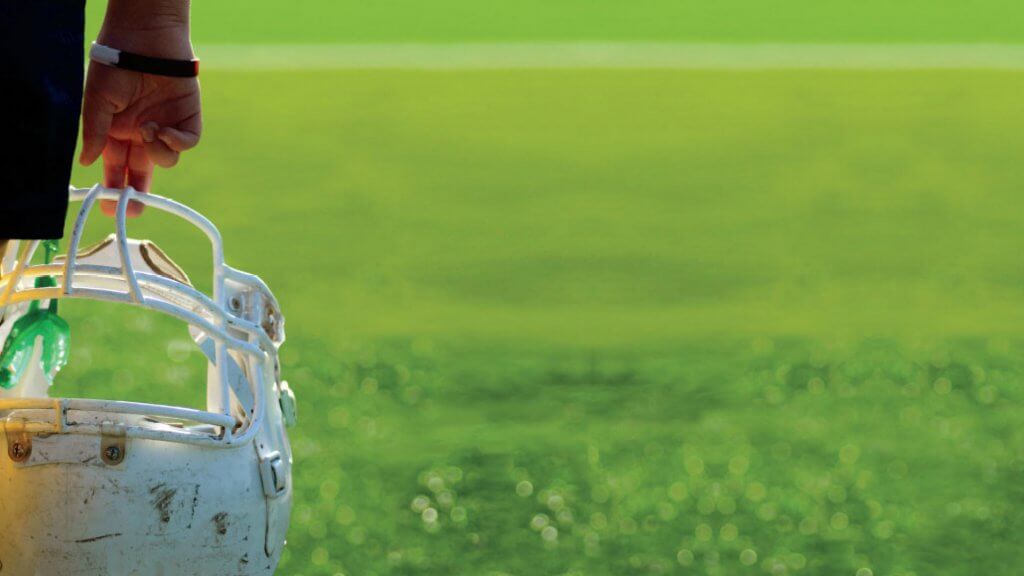 Should you let your child play football?

Is it really dangerous to let a concussed person sleep it off?

A Windsor-based neuropsychologist and sport-related-concussion expert calls for balance, research, and honest conversation.

All things being equal, we know it’s probably better not to get hit in the head. Beyond that, things get complicated.

Dr. Christopher Abeare is a clinical neuropsychologist and professor in the University of Windsor’s Psychology program and Behaviour, Cognition and Neuroscience program. His research focuses on the neurocognitive and emotional consequences of traumatic brain injury and sport-related concussion, which is to say he studies the assessment and management of brain injury in athletes.

While Abeare has been helping varsity athletes manage concussions for more than five of his 14 years at the university, he’s lately witnessed an increased demand for his expertise as the wider world wakes up to the very real risks of sport-related head trauma.

You may have heard of chronic traumatic encephalopathy (CTE), a degenerative brain condition associated with the development of dementia and significant personality and behavioural changes. A 2017 study published in the Journal of the American Medical Association and reported by the New York Times identified CTE in the brains of 110 of 111 former NFL players, setting off no small number of alarm bells at all levels of the sporting world.

As Dr. Abeare explains, concussions are a very real issue, but this panic has not been terribly productive. It’s important to understand that most of the relevant studies in this area involve former NFL players, who tend to live very different lifestyles than the general public. There’s also a pretty clear selection bias at play: athletes who donate their brains to science typically do so for a reason.

“There’s been all this hype in the news about CTE, and a lot of it is overblown,” he cautions. “Repeated injuries may cause it, but we’re far from knowing that. There’s reason to suspect that hitting your head a lot is not good for you! It’s quite likely not. But does it cause dementia? We don’t know. It’s difficult to know at the end of somebody’s life, if they have some issue, what in their 50, 60, 70, 80 years of life caused it.

“There’s a lot of fear-mongering that goes on,” continues Dr. Abeare, who understands this phenomenon as an overcorrection for a general ignorance of concussion that does still exist. “It’s good to take concussions seriously, but at this point in time, there is no reason to believe a child athlete is going to get dementia from a single concussion. The truth of the matter is, if you get a single concussion, the odds of you fully recovering in just weeks or even days are extremely high. There’s a small amount of people who have prolonged symptoms for unknown reasons, but 90 to 95 percent of people are going to be totally fine.”

That said, concussions do happen: A 2006 estimate suggests that between 1.6 and 3.8 million sport-related concussions occur each year in the United States alone. Because identification and reporting are improving every year, we now have reason to believe the true number is higher.

As the study of sport-related concussion grows rapidly, the SRCC has begun to attract graduate students from prestigious institutions like Vanderbilt and Johns Hopkins. While the team experienced a degree of suspicion from athletes and coaches in its early years, the university athletic community has since bought in completely. Instances of reported concussions have gone up (a good thing!), and several varsity coaches have proactively asked to submit their athletes for testing

Currently, Abeare and his students are actively pursuing sophisticated neural imaging heat maps that can display activated regions of the brain. Going forward, Abeare hopes to develop empirical “biomarkers” for recovery from concussion and better methods for assessing an athlete’s pre-injury level of cognitive functioning. In time, he hopes to improve “performance validity” testing—a means of determining when athletes have deliberately “sandbagged” their baseline tests in order to keep themselves on the field after a future concussion—and eventually bypass baseline testing entirely.

They’re also interested in continuing to explore the ways in which concussion affects males and females differently. Most existing research involves exclusively, or disproportionately, men and boys.

The SRCC works primarily with varsity athletes at the university but also branches out into the wider Windsor-Essex community. In the last few years, the SRCC has begun to provide concussion management services to several youth hockey and soccer leagues. Often, the program is also able to admit people from the general public

As Abeare explains, community concussion-management resources are lacking virtually everywhere. “We have our operation here, but it’s very limited,” he notes. “We see five, six, seven hundred athletes, but that’s a small drop in the bucket of the whole Windsor-Essex region. We’d like to expand further into the community and do as much as we can to help, with the finite resources we have.”

The reason all this effort is warranted is that team sports introduce developing minds to dynamic environments that demand and develop cognitive ability and agility. Part of parenting responsibly is now negotiating the risks of participating in youth sports and the very meaningful benefits. How does one do that? “It’s a tough question,” Abeare admits, “and one I’ve given a lot of thought to, for personal reasons and otherwise.”

Abeare acknowledges the divisiveness of the conversation around youth football, in particular, which tends to attract extreme opinions, and he speaks about the debate with the appropriate measure of academic disinterestedness. That said, would he let his own child play?

“The short answer,” he concedes, “is I’m not quite sure. Football certainly is a high-risk sport. But on the other hand, there are many positive reasons to be involved in sports; we know that being involved in sports is very important for a kid’s physical, cognitive, and social development. If it was football versus no sport at all, at this point, my current thinking is I would lean slightly more in favour of playing football. But there are other sports that I think I would prefer.”

Fortunately, as Abeare explains, parents aren’t entirely helpless should their child, despite their best efforts, end up swelling the sport-related concussion statistics.

As a general rule, Dr. Abeare stresses that it’s important to remove athletes from play immediately after any head trauma. “There’s new evidence coming out just in the past week or two showing a dose-response relationship between the amount of time someone plays after having a concussion and the amount of time it takes them to recover,” he notes. “The longer they play in a game after having a concussion, the more time it takes them to recover.”

Next, while every mother or father should care and worry about their child, the ideal parental response to concussion is typically more hands-off than is instinctive.

“Counterintuitively, a parent’s love and affection often gets translated into behaviours that can make the problem worse,” Abeare explains. “They’re asking their kid every ten minutes, How are you feeling now? and that’s not conducive to recovery, because then the child is constantly attending to their symptoms. Imagine you have pain somewhere in your body. If you’re thinking about the pain, it makes it worse.

“I would preface this by saying that, when in doubt, it’s better to be safe than sorry,” he stresses, “but many concussions don’t require significant medical attention.”

As it turns out, he knows firsthand. Last year, Abeare’s daughter suffered two concussions while playing high school soccer after suffering a series of blows to the head in quick succession. While the referee effectively guided her to answer the on-field concussion protocol questions correctly (“Exactly what you shouldn’t do,” says Dad) she was eventually pulled out of the game after demonstrating visible signs of confusion.

A few weeks after that, Abeare sat down with his wife and daughter to make a difficult decision. “We had a conversation about whether it was wise to continue playing,” he relates. “As parents, we’re limited to some degree to what our children want to do, unless you’re going to be totally authoritarian about it. We were hoping if we talked to her and provided her with adequate information, she would make the right decision on her own. Of course, we wanted her not to return to the sport in grade 12, and she didn’t.”

Eventually she was able to recover physically, re-establish herself at school, and find new social and emotional equilibriums, but the process took a couple months.

During the recovery phase, Abeare bristles at the conventional wisdom dictating post-concussive athletes ought to be isolated in a dark room for weeks. “That is one of the worst things you can actually do,” he stresses. “If I took you and put you in a dark room for two weeks, you would come out depressed, you’d come out with physical symptoms you didn’t have before. It would make you worse, even if you’re otherwise healthy. It’s not a good approach.”

Somewhat similarly, Abeare notes that preventing a concussed person from falling asleep is actually contrary to current best practices. “That was well intentioned, of course, but unless you have reason to suspect that a person has a brain bleed, it’s better to let them sleep and rest,” he clarifies. “After a concussion, your brain is in a period of high energy use and a diminished ability to supply the blood. So, the last thing you want to do is tax it more, at least during those first couple days.”

Clearly, participating in high-risk youth sports involves navigating a sea of misinformation. To stay afloat, Abeare advocates for trusting university-based programs in Windsor and elsewhere, as they tend to be staffed by well-trained academics actively contributing to research in the field. He also recommends online information resources from the national charitable organization Parachute Canada and the (US) Centre for Disease Control

Beyond those safe harbours, again, things get complicated.

“The quality of care varies widely,” cautions Abeare, with audible diplomacy, “and unfortunately the concussion ‘crisis,’ so to speak, has caused a number of outfits to pop up that may have people who may not be as well qualified—who may not have the background knowledge—to handle it

“It helps to do a little homework.”

A Bridge Too Far: How COVID-19 border restrictions are affecting local families

50 Ways to Calm Your Nervous System