Hogs For A Cause 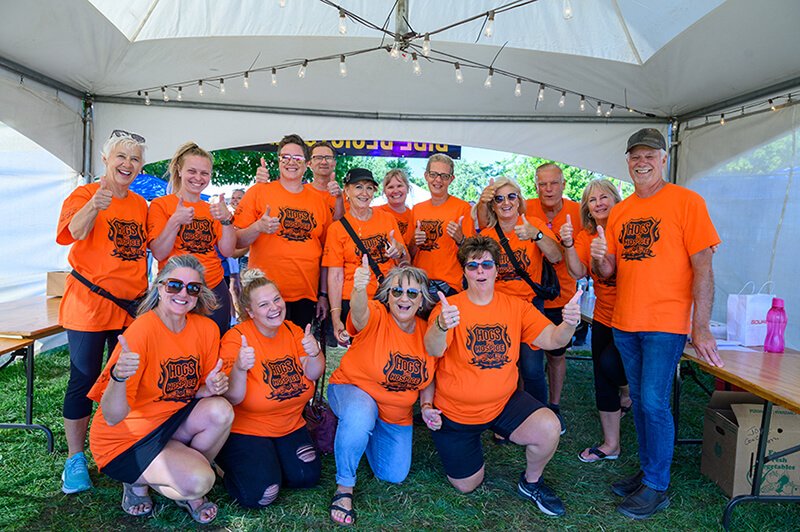 When the residents of Leamington heard the hogs come roaring into town from far and wide on July 29, for the first time in three years, it was welcomed as a return to normal.

“We look at it as a two-year pause,” states Hogs For Hospice board member Joe Oswald. “When the weekend actually hit, it actually marked three years. It’s a 12-month rolling machine, so we’ve already started planning for 2023.

“The first event was in 2016 and we were rolling right into 2020, fully planned with everything booked, and then the pandemic hit. We did keep the brand alive and well with events, drive-in movie nights, a poker night, and a 50/50 draw.”

The 2022 event was the fifth Hogs For Hospice rally, a three-day event that both raises money for Erie Shores Hospice and helps boost local businesses.

“It’s something that started at a kitchen table,” states Oswald. “We found out in 2015 that our area was going to be privileged enough to have a hospice. That was just a message sent from God that we were going to get this facility in our area and we had an opportunity.”

Hospice dates back to the founding of the Hospice of Windsor-Essex County in 1979. Although an affiliate of the Windsor Hospice, Erie Shores Hospice is a separately-funded organization in Leamington.

“The whole idea of having an event where money would be injected into a community as opposed to asking a community for money, that was the idea behind it,” he explains. “We knew that there were no true motorcycle rallies across Ontario. There are charity rides and things of that nature, but not an all-out motorcycle rally that incorporates a registered ride, a concert series, bike games, stunt shows, custom bikes shows – all those different things where people would actually come to this area.”

Oswald says that with Hogs For Hospice, everybody wins. “The hotels, the restaurants, the gas stations – so, as much as our hospice wins, our community wins, and we wanted to build an event that our community would get value from.”

“It was an idea that’s turned into a movement,” says Oswald. “We feel a sense of obligation to keep this thing going – and not only for our hospice. Hospice is a place of peace and tranquility – 90 per cent for the families and 10 per cent for the patients – because we all know what happens in hospice.”

“We have no intention of slowing down. We feel a sense of responsibility, not only to our hospice, but also to our community as well.”

After this years event, Oswald says that Hogs for Hospice has netted over $2-million for Hospice since its inception.

“The event this year will cover the cost of the entire hospice for the next year so that no family has to put a hand in their pocket,” boasts Oswald, “We’re very proud to say that. We’re also proud to say that, economically, the community won.”

He adds that Hogs For Hospice has gone a long way to promote what they call “Ontario’s best kept secret” – Leamington – through the event’s economic impact, tourism, as well as showcasing Point Pelee Provincial Park and the area’s numerous wineries.

“This year it really hit home,” states Oswald. “This is now our fourth 50/50 and the largest pot that we’ve ever had before was $121,170, and all four winners have been very deserving winners and very humble winners from humble backgrounds.”

“The thing that jumped out at us this year was that when we announced the winner, Jamie Poisson, a single mother of four – we had over 1,400 Hogs for Hospice followers that didn’t know Jamie but went on to social media and wrote comments congratulating her. I think that speaks to the character of the people that support and follow us and we are just blown away.”

Since the conclusion of Hogs for Hospice on July 31, Oswald jokes that he and his fellow board members are enjoying getting to know their respective families again.

Plans are already well underway for the sixth annual event, scheduled for 2023. Oswald says that Hogs for Hospice’s 423 volunteers have been the lifeblood of the event and have allowed it to grow and become such a success for the community.

“We would like to thank our volunteers and our sponsors,” says Oswald. “Without them, it’s nothing. We couldn’t even get this thing off the ground. We’re just so humbled by people’s generosity and belief in this vision.”

For more information on Hogs For Hospice, please visit their website at www.HogsForHospice.com.