Jazzing it up with Michael Palazzolo

Michael Palazzolo, a professional bassist from Windsor, brings a sense of melody and groove far beyond his 31 years.
Author: Matt Weingarden
Photographer: Trevor Booth
10 months ago
|
No Comments
Share On 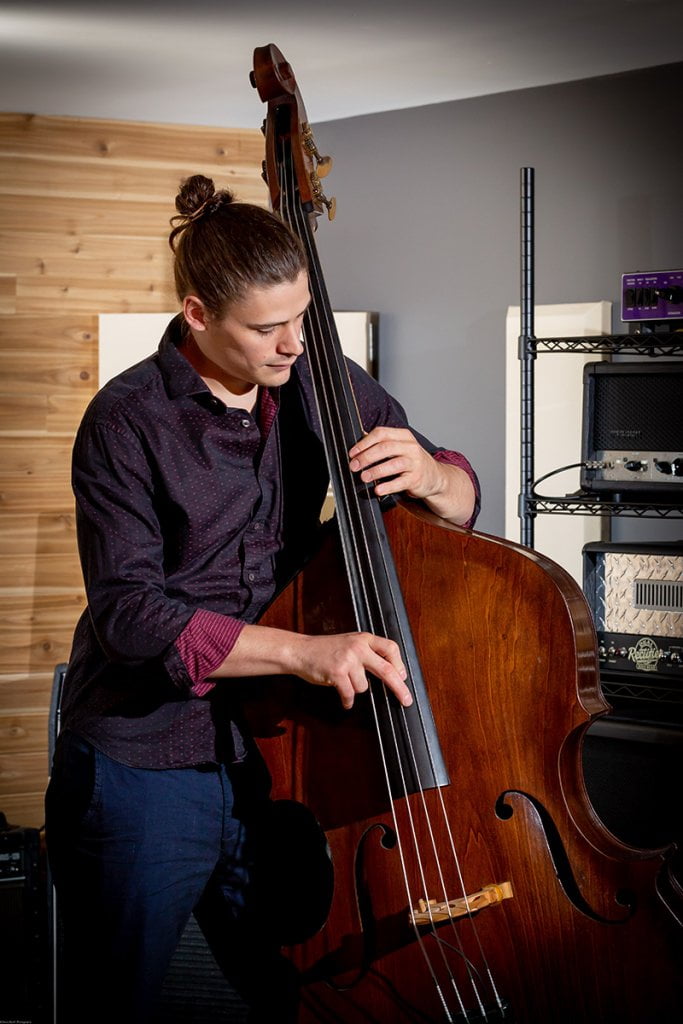 So much so, that his playing has caught the attention of legendary American jazz composer Bob James, best known for his song ‘Angela,’ the theme from 70s television show ‘Taxi.’

Since 2017, Palazzolo has accompanied James, touring and playing across the world. Not bad for a local kid.

If you follow the local music scene, you will recognize the Palazzolo name. Michael comes from a long line of professional musicians that includes numerous uncles, aunts and cousins who have been playing music across the region for years.

He credits his father Nino Sr. as being his biggest influence – not only with his musical career, but life in general. Nino is a retired teacher and former head of the local band Music Express. With his encouragement, Michael began music lessons at around age four.

He began playing the piano at five years-of-age, his father teaching him the basics of technique, theory and harmony. He admits that when he was young, he really didn’t understand the importance of study.

“Practice was sometimes difficult,” he said with a laugh. “However, my father was very encouraging and often offered me a loonie to finish up my practicing, so I could go to the candy store later.”

He says that growing up in such a musical surrounding, singing was always encouraged, “We all sang,” he added. “All the siblings performed and loved music.”

As a music teacher, Nino Sr. was able to provide several instruments to his children for them to experiment with. He says that having supportive parents has made all the difference.

“My dad bought me my first guitar, which I learned to play alongside my brother Alphie,” Palazzolo said. “I still use the first bass he gave me to this day. All of the musical influence in my life stems from my family, especially my father.”

Soon after, he began playing in a band with his brother – and they needed a bass player.

“Well, my dad played bass, and that’s cool, so I thought maybe I’d give it a try,” he explained.

As a teen, the band hit the road playing gigs across Southwestern Ontario.

“We had a great time out there…hanging with my brother was really important to me,” he said. “And at that point in time I kinda saw the light… realizing that, hey, I may be able do this for a living.”

While still in high school, Palazzolo was introduced by his father to local pianist/keyboard player Mike Karloff, who attended Wayne State University in the music department. He studied jazz piano with Karloff.

Karloff pointed out that the school was noticeably short on upright bass players and Palazzolo could be able to study – with a full-ride scholarship opportunity.

“If I could get an opportunity to get my schooling paid for…heck yeah,” he said. “So, I began practicing and prepared for an audition.”

Palazzolo was accepted to WSU and his musical journey continued to a much higher level.

The connections made at WSU would spur a love for Detroit and the local jazz scene.

Palazzolo cites local saxophonist Ray Manzerolle as an important part of his early gigging experience regularly in Windsor at Tony’s Pizzeria as a ‘chordless-duo.’

Shortly after, he received a call from James’ manager and was asked to play a small jazz festival on Mackinaw Island in Michigan.

“After that show I began gigging with James regularly,” he said.

Palazzolo took it as a sign to stay true to his musical pathway and focus on making a career of it.

“The experiences that I had with James on the road was an education in itself,” said Palazzolo. “I’ve learned that touring is exhausting, yet so rewarding. To meet so many people around the world affected by Bob’s music is amazing and for him to take me along for the ride is super-special.”

Palazzolo has toured around the world with stops in Japan, the U.S., Russia, London, Amsterdam, Spain, Hawaii, Mexico and the Caribbean Islands.

While in Russia, Michael was introduced to caviar and vodka.

“It was crazy…they took such great care of us all week (in Russia),” he added.

Michael even experienced his first boat cruise while performing with James.

What was it like working in the studio with Bob James?

“It was comfortable,” said Palazzolo, who says the ‘Espresso’ sessions were completed in four days at a Los Angeles studio. “It was a relaxed vibe…and it was my first experience in a recording studio on that level. Bob and his manager were really happy with my work.”

Ask any bassist about their musical influences and you will usually get a who’s, who list of bottom enders.

“I have a particular love for sax players like Coltrane, Rollins and Parker,” Palazzolo said. “I really try to emulate their styles on the bass, especially when I’m soloing. I often revisit Parker’s bluesy based solos and make them my own.”

Palazzolo says that when he solos, he tries to tell a melodic story – collecting on the language that started way before he began playing music.

“I aim to transcribe/lift language, learn it, utilize/manipulate it in my improvisation, all the while be guided by my soul,” he said enthusiastically.

What has Palazzolo been up to during the pandemic?

“Practicing like crazy, writing, composing and even dabbling in a little digital recording,” he said. “I’ve had to pick up a day job…which has been humbling…but, I would certainly like to get back to my musical career.”

Not being able to cross the border has been a challenge for Palazzolo – his strong connection to Detroit, not seeing his friends and making musical connections has been difficult.

“When I’m in Detroit, I really benefit from the driving inspiration of others around me…I’m missing that right now,” he added.

When he’s gigging, you can catch Palazzolo at the Dirty Dog jazz Café, historic Baker’s Keyboard Lounge and the Jenuine Cigar Lounge. He is also part of a jazz collective that busk regularly in downtown Windsor at the corner of Victoria and University.

‘Abbey’ is a song he wrote in remembrance and dedication to his dog, who passed away some years ago.

Palazzolo describes song two “Follery Returns From Time, Dreams Remembered” as a “very contemplative and relaxing song that puts one in a very calm state, as the listener is taken on a harmonic and melodic journey.”

Palazzolo says that he wrote the songs on piano and shared the score with James.

“His interpretation of the vibe, melody and mood was so flawless, it’s an honour to work with him,” he said. “I’m composing a new piece and I plan to work with Bob and Jack again soon.”

Advice for young musicians who may be interested in pursuing a career in music?

“You need to be prepared to work super hard, considering how many people out there are trying to achieve the same goals as you are,” he shared. “One thing my teacher Paul Keller told me was, if you put the time and commitment into the music…music will ultimately support your efforts in return.”

And for those looking for a steady bass playing gig?

Again, Palazzolo says you must put in the homework, especially when learning songs and transcribing bass lines.

“If you are offered a gig, a week or even a day in advance, can you learn the material and pull it off?” he asked quizzically.

“Fellow bassist Jeff Pedraz once told me, to be a good bass player there are three things expected; you need to be on time, have good time and be a good time.” he said.

“In other words, don’t be late for a gig, do your homework…be prepared to play that gig and above all…don’t be in a sour mood at that gig. Cause ultimately, it shows in your work and affects your ability to make a living.”

Words we can all live by.

Palazzolo currently teaches jazz bass at the University of Windsor, as well as offering private lessons.