Laughing all the Way

“Brewing for Comedy” Rings in the Season with Holiday Shows & Can Drive
Author: Jen Brignall-Strong
Photographer: Craft Head Brewery
2 weeks ago
|
No Comments
Share On 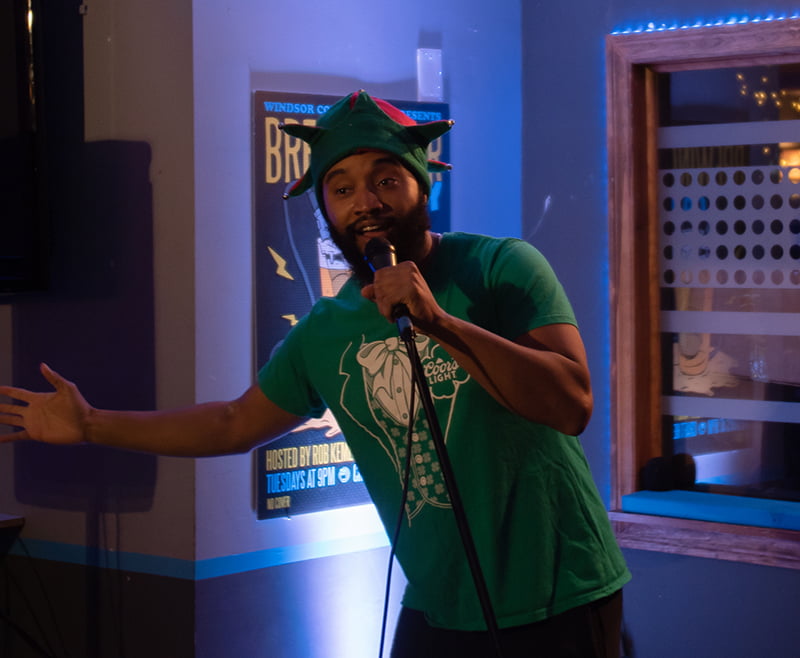 For local comedy show “Brewing for Comedy,” the holidays are definitely a laughing matter.

The group, which hosts stand-up comedy every Tuesday at Craft Heads Brewing Company, will be celebrating the season with two festively funny shows featuring some of Windsor’s top comedians, as well as acts from around Canada who are home for the holidays.

“Everyone’s got family from Windsor,” says comedian Rob Kemeny, co-founder of the group. “We have a lot of guys who come here when they’re in town.”

“For our last regular show of the year, we pull out all the stops,” shares fellow comedian Paul Montanier, who together with Rob formed the group nearly eight years ago.

“It’s a conclave of way too many comedians with special guests, delicious beer, and holiday cheer,” he continues, noting Windsor natives like Rob Mailloux and Dave Merheje have stopped in to perform in years past.

The “Brewing for Comedy Christmas (or Whatever) Party Show” happens Tuesday, December 20th. Admission to the show is free but the group asks each audience member to bring at least one non-perishable food item or contribution for The Downtown Mission.

The show brings in a sizable donation each year, and the group looks forward to continuing on the tradition.

It’s not the first charitable initiative the comedians have been a part of, recently working with Hospice of Windsor to have several local acts perform for patients and their families in their rooms.

“It went really well and people were happy with it,” says Rob. “We’re looking to do more things like that in the near future.”

The comedy show and their rotating lineup of nearly two dozen regular performers have been making crowds laugh weekly at the Craft Heads’ tap room since June 2015, when co-owner Bryan Datoc agreed to make the brewery the unofficial permanent hub for comedy in Windsor.

“How can you not support people pursuing their passion?” wonders Bryan. “We’ve been given that chance more often than not and the best way to pay it back is to pay it forward.”

“I came in on my high horse demanding to do an open mic show,” jokes Rob. “Bryan was just like, ‘Yeah, sure!’ He really understands what we’re trying to build here.”

The shows started off bi-weekly and quickly grew into a weekly occurrence, says Paul.

“We wanted to give comedy one hub in Windsor,” he explains. “We needed just one home base and the more we put into this show, the more people started filling it up every week and now we’re kind of in that stage of expanding.”

The shows are a balance of seasoned veterans and newer comedians working through their material and building their careers, says Paul, noting that they try to give an equal shot to every act.

“It’s like what we do with our beer, you just gotta try it,” says Bryan. “The best way to learn is from experience and I think giving people as many tries to get that experience is important.”

The group also puts on monthly, “Pro Shows” featuring national touring acts sharing the stage with local favourites. They’ll be hosting a special holiday “Pro Show” Roast Battle on Friday, December 23rd, where some of the area’s sharpest comedians battle it out with the most brutal jokes imaginable before judges Paul, Rob, and Craft Heads’ bartender, Mike from behind the wood.

Tickets are $10 and available through the Eventbrite link on the group’s Facebook page. There will also be several pairs of tickets hidden in Craft Heads’ annual beer advent calendar, featuring 24 unique one-off beers, as quirky and fun as the comedians that grace their stage every week. “The holidays are all about family. Sometimes you’re related through blood, but sometimes it’s through sweat and tears of laughter,” says Bryan. “That’s what the Brewing for Comedy family is all about and we’re excited to have everyone home for the holidays.”