Life isn’t about the destination, it’s about the journey

A Windsor family weathers more than its share of storms and emerges stronger on the other side.
Author: Matthew St. Amand
Photographer: Trevor Booth
1 week ago
|
No Comments
Share On 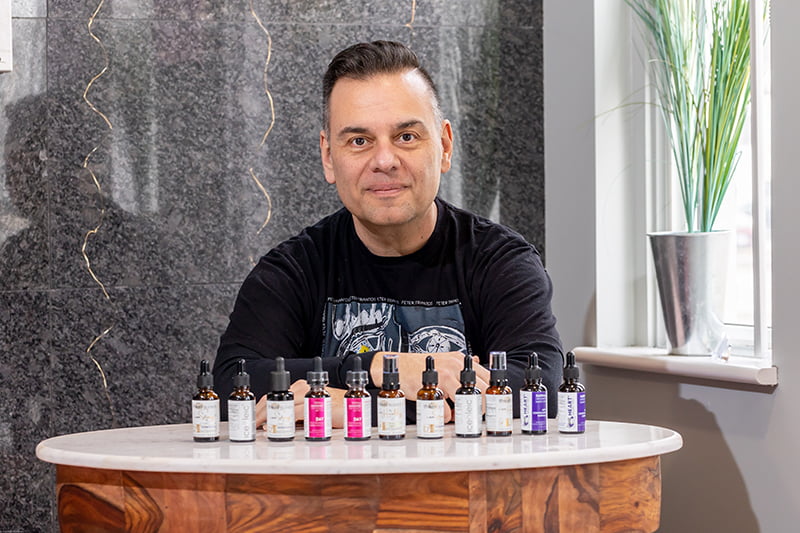 The origin story of Theo’s Blends is like a modern Zen parable: Windsor’s Theo Rallis was a successful process engineer, achieving every aspect of the North American dream: family, career, bright future. Then, one day in 2008, he had an epiphany.

“I was on the road when I suddenly thought: ‘What am I doing?  This is nuts!” Theo recalls. “My son Nik was a year old; my daughter Grace was three, and I realized that working all the time, being on the road away from my family was a brutal lifestyle.”

Such feelings come with the territory and are common to most working people. What Theo did next, however, was not:

“I pulled over and made two phone calls,” Theo says. “I told my company ‘I’m never coming back,’ and then I called my wife and explained what I had done. I was at a point where I had to ask: ‘Is there more to my existence than work?’”

“I went into the olive oil business,” he continues. “My family has had orchards in Greece for centuries. We went for the harvest the year before and looking at the process, I found we were generating way too much heat—even for a cold press.  The engineer’s mind is always thinking: ‘How can I do this better?’”

Theo had some ideas.

“Initially, it was all about food,” he says. “We had tremendous success. We still private label for Mark McEwan, Top Chef Canada. Celebrities, knights, and even presidents have had our olive oil.”

For all the success, Theo’s focus centered on the health-centric piece of his company.

“When you try mine, it’s more like wheat grass than olive oil because it’s pressed so cold,” Theo says. “It wasn’t until we started making supplements, and our patent-pending formula, that we realized this was different—it didn’t behave like other fats as we started forming molecules.”

Yes, the science behind a better olive oil is science, indeed.

Just as the business hit its stride, life threw a monkey wrench into the middle of the works. In this case, Theo became ill.

“I was born with a solitary kidney,” he says. “And it got tired.”

In fact, Theo was in renal failure. Dialysis was necessary. There was one problem—due to some health variables, dialysis was not an option in Theo’s case. During a consultation with a doctor in London, Theo was told: “You look great. You’re doing all the right things. You have between six months and a year before you fully crash.” By “crash” the doctor meant “die.”

That’s when Sharon entered the narrative. Theo’s wife, Jen, knew Sharon from a weekly yoga class. When she heard about Theo’s health crisis, Sharon said she wanted to donate a kidney to him.

“You have to understand, this is a complete random stranger,” Theo explains. “During the kidney compatibility testing process we found that she wasn’t a good match, she wasn’t even a perfect match. She was an exact twin match.”

Theo understood the gift bestowed upon him, writing about the experience on his website: “As there are no words to express our gratitude for her gracious gift, we vowed to live life to its fullest and help as many people as we can along the way.”

At this point in the made-for-TV movie, inspirational music rises as the credits roll. Life, however, was not finished with the Rallis family.

“It was 2017, and I was in Greece for the harvest,” Theo says. “Jen called and said: ‘I’m in the hospital with Nik. They want to do a CAT scan. They think he has a brain tumor. He’s having seizures.’”

It was determined that nine-year-old Nik had an extremely rare brain condition called “bilateral perisylvian polymicrogyria” (BPP), which caused him to suffer nearly a dozen seizures a day. Worse, Nik reacted adversely to drugs meant to help him.

“Nik was pseudo catatonic,” Theo says. “And he was drug immune. At one point, he said to me: ‘Daddy, don’t let me die.’”

Theo was on a mission.

“I started down the CBD path for myself,” he says. “In renal failure, you’re in constant pain, so I searched for a solution with no THC in it.  THC is the only compound in the plant that makes you goofy. The rest is pure medicine.”

He found a medical facility in San Antonio, Texas, and connected with Josh, the ultimate chemist.

“We kept bouncing ideas of each other,” Theo says. “It was a four-year journey, but we formulated a CBD oil that got Nik down to where he has a cluster every three or four months, rather than daily.”

Through Theo’s Blends, the Rallis family has made their supplement discoveries available to others, except for the CBD.  For that, Theo must be contacted directly.

“Everything we’re creating is next level,” Theo says. “We want to help as many parents, spouses, and immune compromised individuals, like myself, sleep soundly through the night and live beautiful, ‘normal lives.’”

Regarding his family’s journey, Theo writes on his website: “[W]e have never forgotten what it feels like to be vulnerable and concerned about what is put in your or your loved one’s body; we are committed to ALWAYS working tirelessly to ensure our products are: pure, made with the best ingredients; and highest integrity and latest scientific innovation.”