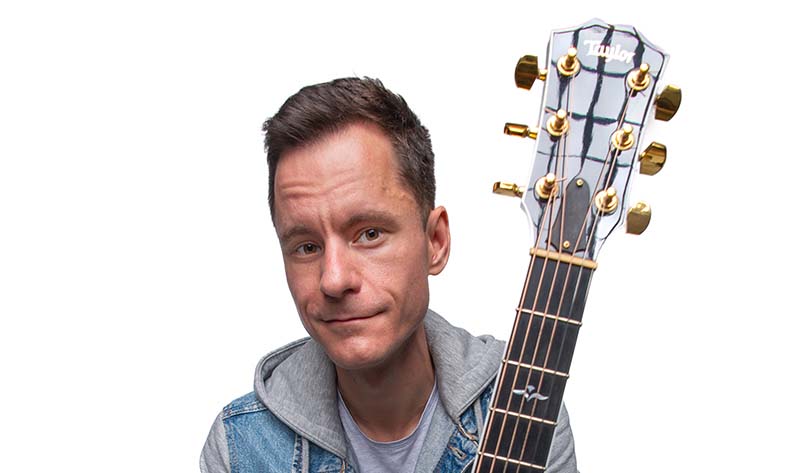 On the twilight side of a brutal pandemic, many of those among us are left with bad memories—a job lost, a divorce, isolation from loved ones. However, for some, the burden was even more extreme.

Local songwriter and musical artist Mike Cerveni attempted to capture the raw emotion of the pandemic in his music video for Shooting Star—a stunning new song released by him this past summer.

To the backdrop of the pandemic, in the video, Cerveni deals with the loss of a relative that disappears suddenly from his life, only to succumb in a hospital with no one but masked nurses to hold his hand as the life drains from him. Cerveni attempts to force his way into the clinic, but to no avail.

“You’re a shooting star, you’re my wish afar—tell me you’re okay,” mourns Cerveni in Shooting Star. “You’re my guiding light in the dead of night—give me some sign. I wanna know that you’ll always be with me.”

Although the music video was inspired by the struggles of millions worldwide over the course of the COVID-19 pandemic, the song itself comes from a personal loss in Cerveni’s life over a decade ago.

“If you’ve seen the video for Shooting Star, it’s about my mom—she passed away 14 years ago,” reveals Cerveni. “Without her, I wouldn’t exist and she was always the one encouraging me to do music when I was younger. I’ve never felt like I’ve wanted to stop, but it’s also a good way to keep that memory alive for me—for her, knowing that I’m still making music—because it’s really because of her.”

Cerveni draws the inspiration for much of his powerful rock songs through a strong emotional core.

“I’ll just pick up the guitar and play a few chords and I’ll come up with melodies instantly—even co-variations of melodies,” he explains. “It’s strange to say, but in a matter of minutes, it’s usually done if that inspiration hits.”

“People, relationships, especially going through loss—it’s the highs and lows of life … and I lean into that in those moments and that’s how I create.”

Cerveni says he wouldn’t describe his music as uplifting, but that there is certainly a positive message within. He adds that, at the core, Shooting Star is his wish that his mother was here to witness all that she has missed.

During his childhood, Cerveni says that he was always around music. His family, especially on his father’s side, was very musical and he has fond memories of his grandfather playing guitar at family functions.

“What really happened was, I remember sitting watching a concert on TV, I think it was Third Eye Blind, and I was into them,” he recalls. “I thought, ‘I want to do that. I want to play guitar and that’s what I want to do.’ My parents got me a guitar and it went from there.

“It snowballed until I was 11 years old, sitting in my room alone, learning songs by ear—Blink 182, Green Day, all of those bands. That was the spark—and then I started writing at 16.”

These days, Cerveni is the father to a five-year-old son who is drawing inspiration from his old man.

“I have tons of videos of him singing randomly on the microphone, himself and me creating music,” he boasts. “I’m like, ‘This doesn’t need to stop!'”

“I wrote a song for my son, who was one at the time. It’s called Everything’s For You. Being a father changed me. All you do is think about your kid and you have all those worries and stuff. Other priorities fall into place and it’s what’s more important. I wouldn’t change it for the world—he’s five now, so it’s pretty amazing. He loves music too and he loves watching me create.”

In 2010, Cerveni released his debut album, The World You Know. Three years later, he put out the song What Would You Do?, inspired by the television show of the same name. The song, with the help of local women’s shelters and organizations, helped draw light to the issues of domestic violence in the Windsor-Essex community. In 2019, after getting married and the birth of his son, he released a self-titled follow up album.

Lately, Cerveni has been attempting to adapt to the ever-changing streaming game, opting for singles over albums.

“Singles really are the way to go,” he explains. “Then, if you have enough, you can always put out an album if it makes sense for them to be together and then you can distribute it that way.”

“You’ve got Spotify, you’ve got all the streaming services—people really just do the one-song-at-a-time kind of thing these days.”

With the positive reception received by Shooting Star, Cerveni has been gearing up towards the release of a new single, Been Through So Much, on Oct. 10—World Mental Health Day.

“I wanted to put two different topics in the verses because I know people have gone through similar things—feeling alone, feeling invisible, depression, anxiety, those are the main themes,” discloses Cerveni. “It could be getting bullied at school—getting through those struggles and challenges, where you think you’re not going to get out, but if you do, you’ll come out even stronger because of it.”

Cerveni, who has family in Serbia, has brought on Serbian rapper Janko Francisty for an alternate mix of the song, described as a Linkin Park-esque arrangement, to be released later. After seeing the rapper on Facebook, Cerveni knew he needed to collaborate. “I was like, ‘I don’t know what he’s saying, but I like his voice and I’m going to reach out to him.”

The singer says that he has been busy preparing to promote the song, having just shot a video for Been Through So Much that is set to land at the end of October. He has also assembled a live band, who he is currently rehearsing with for future live shows.

For more information and new music in the coming months, please visit www.MikeCerveniMusic.com or follow him on all social media platforms at @mikecervenimusic. To pre-save the upcoming single, Been Through So Much, please visit https://ffm.to/btsm.