Two grieving families with an unwavering commitment to giving back implement a buddy bench project for schools in Windsor.
Author: Millar Hill
Photographer: Syx Langemann
3 years ago
|
No Comments
Share On 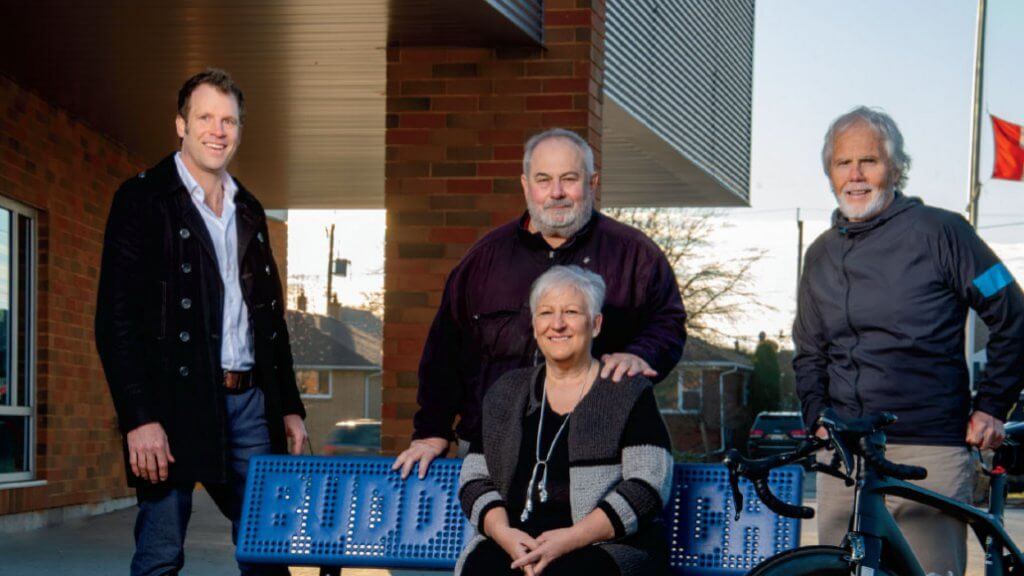 Allison Hayes had an extraordinary amount of vitality and zest for life that shone through in everything she did. When she developed a rare pancreatic cancer, a neuroendocrine tumour, Allie vowed to fight it and did so for 13 years. She passed away on January 6, 2015

Even though Allie is no longer here today, her legacy lives on. As a young girl, Allie was described to have a profound passion for health and wellness. “The interest in an alternative lifestyle is something that came from within in her and she continued to seek out any opportunities she could to keep living that kind of lifestyle,” said her husband, Jeremy

Allison, who taught at the now-closed St. Jules Catholic Elementary School, was known by the nickname Allie Sunshine. Allie had an ability to inspire others and her family wanted to keep that legacy alive. They began their work and together formed the Allie Sunshine Project

“When we were planning her funeral in the moments following her death, her brother suggested we collect donations at the funeral,” said Jeremy. “But, rather than giving them to an existing charity, he suggested we form our own. We didn’t really know what that meant, but we embarked on that journey.

“We have been on that journey ever since and it’s been a wonderful one,” he added

Through the Allie Sunshine Project—which is run by Allie’s parents Susan and Terry Chartrand; Jeremy and his parents, Lynn and Dan Hayes; and Allie’s brother Adam Chartrand and his wife Katie—they seek to inspire others by creating and participating in projects within Windsor-Essex that nurture self-healing and promote learning opportunities to a network of wellness explorers for the mind, body, and spirit

The project’s main fundraising event is their annual plant giveaway and flower sale. Each year they give away an entire tractorload of vegetables, herbs, and fruits to both new and experienced gardeners as well as supporting local community garden associations that might not have the resources to keep their programs flourishing

“Some of these programs are poorly funded so we try to provide them with as much as we can to get them going,” he said.

The organization’s main project has been the Allie Sunshine Healing Garden in Lakeshore. It is a space that is used for people to deal with loss, grief, and rebirth while offering a chance for people to connect with the earth and themselves through that space

“We have also used that space as a place to grow vegetables for the Divine Mercy Food Bank and previously we had donated those vegetables to the Salvation Army men’s shelter in Windsor,” said Jeremy

Allie’s parents caught on to a project called the buddy bench. The grade three students at St. Teresa of Calcutta Catholic School wrote a grant proposal and received funding for one of these benches to be installed at their school

School can be a traumatic place for some students. It is a time where children are developing their social skills, and some are more advanced than others. The buddy bench provides students who might be having a hard time making friends an opportunity to do just that. It is a non-verbal bridge to friendship. The child who feels ostracized sits on the bench, and another child will join them to talk things through, reducing alienation and deepening the bonds between children. Through the Allie Sunshine Project, the organization has learned that the deepest form of learning happens in trust and respect of relationships

Family friend Charlie Morgan was inspired by Allie and her family’s organization. Together they joined forces as Charlie rode his bicycle from Chile to Patagonia, which is over 2,000 miles of cycling. Through his initiative the foundation raised funds for the buddy bench project so more schools in Windsor-Essex could have one installed

In today’s society, it is very easy to take things for granted—whether it’s our health and wellness or the relationships we create or our day-to-day lives. The most unexpected occurrences can happen at any given moment and the harsh reality is that sometimes the outcome is not always fair.

It is important that we take care of ourselves and be grateful for what we have. Allie had the ability to inspire others and she still does today. She was a unique individual who saw the true essence and beauty in everyone and everything

The Allie Sunshine Project is an organization that has set out to better the community and the people in it, one project at a time

For more information about events or if you’d like to support the Allie Sunshine Project’s initiatives visit: www.thealliesunshineproject.com

Miracle in the Pandemic Year