We’re getting fit with the Shred Shop 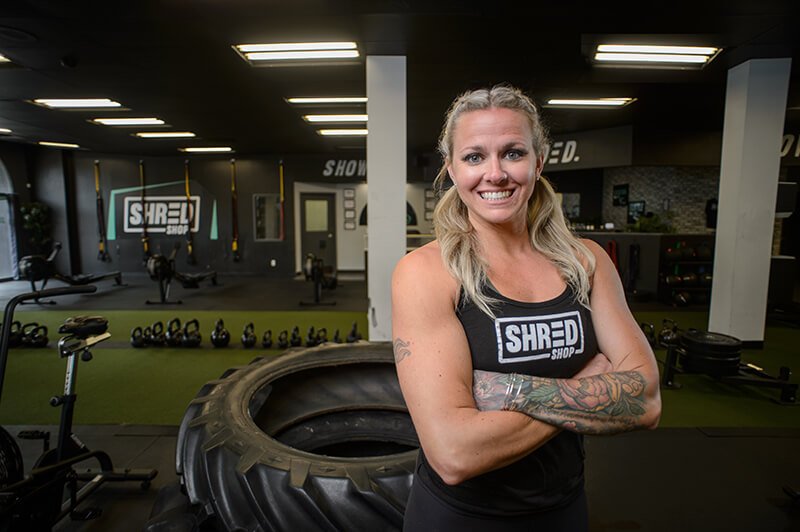 This is the story of the Shred Shop. How a coffee barista with a workout hobby became a bodybuilder and eventually the owner-operator of the hottest workout facility in Windsor-Essex.

Sawyer Telegdy was born and raised in Windsor. She had always participated in solo sports and was accomplished in downhill slalom racing and ballet. Working at Starbucks, she enjoyed working out but kept to herself.

In 2010, both of her parents were diagnosed with terminal cancer, and her life took a turn. She took eight months off from the coffee shop to help care for them but the stress of the situation was taking its toll.

“I had to find an outlet, I had to find something to do,” recalls Telegdy. “A gentleman, in particular, who was a bodybuilder at the gym, saw that I was really in the zone, really focussed.

“Going to the gym and working out was my stress release. It was the only thing that I knew. I didn’t feel very social, obviously. I didn’t feel like talking to a lot of people and I didn’t want to go out. I was too young to drown my sorrow in a bottle—I just went to the gym—that was my escape.”

She says that he took her under his wing and taught her everything he knew about form and body mechanics. They met at the gym daily and she soaked in everything she could, and, at his suggestion, she started competing as a competitive bodybuilder.

Things were going well for Telegdy, her parents survived their ordeal and she started to place well at her competitions. People started recognizing her at the gym, asking for advice, which led to a little off-the-cuff training. A friend of hers offered to let her train at her personal studio if she would agree to teach group classes on her off-hours away from Starbucks.

“That’s when I got introduced to group-style,” explains Telegdy. “I was always so independent, doing one-on-one stuff. This group shit started getting pretty electrifying and I just had a blast with it. People were coming together and motivating each other, as opposed to a trainer in a one-on-one setting. The energy was so great and everyone was so motivated, I really started to understand why group training was starting to take over.”

Group training and crossfit were all the rage and she says she jumped on the bandwagon and her classes expanded until they were too big. So, Telegdy opened the doors to the Shred Shop on Jefferson Blvd.

“I thought, people would really like it if I added more weight instead of a body-weight boot camp,” she says. “I added some resistance, some high-intensity intervals, a little bit more structure, super-loud music, microphones with the coaches—so loud you can’t even think—and created an oasis where people can walk in and do what I did in the gym years ago.”

She explains that the Shred Shop fuses high-intensity circuits that include resistance-based movements, building muscle mass through lifting weights, and explosive cardio intervals.

“The way that we train the functional movements that we perform here, they create the optimal metabolic demand for overall conditioning,” explains Telegdy. “The reason why functional fitness is so important is that it translates outside of a gym setting. A bicep curl gives you bigger biceps, but a bicep curl doesn’t make you squat and pick something up off of the floor pain-free for the rest of your life.”

Although, on start-up, it was a two woman show with Telegdy and her admin tech, Amanda, Shred Shop now features an all-female workout crew that is both pre- and post-natal trained. Classes are 45 minutes with a mobility cooldown at the end, also their coaches offer a one-on-one personal training experience, and during group classes, they aren’t up on some stage calling out instructions—they walk around and correct movement patterns for better training.

Within six months of opening, Shred Shop’s clientele exceeded the space at their original location and they relocated to 815 Erie St. E and, in November 2021, they opened their second facility at 6020 Malden Rd. in LaSalle.

“We service both men and women,” states Telegdy. “Just because it’s female operated doesn’t mean it’s a women-only type of thing. We do have lots of men who train here, but, to be honest, there are a lot of powerful women and I think that women in fitness is a very inspiring thing for other women. We’ve had a lot of feedback from members saying they are very comfortable getting direction from a female—we have a niche.”

This year, Telegdy was honoured by the Windsor-Essex Regional Chamber of Commerce as the 2022 recipient of the Young Professional of the Year Award at their annual Business Excellence Awards.

“Honestly, I genuinely wasn’t expecting it,” she admits. “I couldn’t believe that I’d earned that, that I deserved that kind of award, so it was really humbling.” She adds that she is proud of her staff and their resilience during the pandemic and the community that has helped them grow.

This summer, there is more in store for the clients of the Shred Shop, including a spin studio, which will give clients more options and variety in the workout choices, and Telegdy is actively building up her one-on-one and group training teams.

In the end, the Shred Shop is all about self-improvement and the betterment of living for their clients.

“That’s what we do here—that’s the difference,” states Telegdy. “We teach people to move their body, under pressure for long periods of time, with power and no pain. We teach that pattern so that they are functional humans outside of here—anytime, anyday, in everything they do.”

The Cyclist on the Bike Goes Round and Round

What you believe, you perceive