A Windsor-made app invites international students, recent immigrants, and other marginalized jobseekers to “swipe right” on promising job postings. Called “AyeWork,” the ambitious startup is punching in and punching up, doing the work needed to take on some of the world’s largest tech companies.
Author: Jesse Ziter
Photographer: Syx Langemann
11 months ago
|
No Comments
Share On
Share on email
Share on facebook
Share on twitter 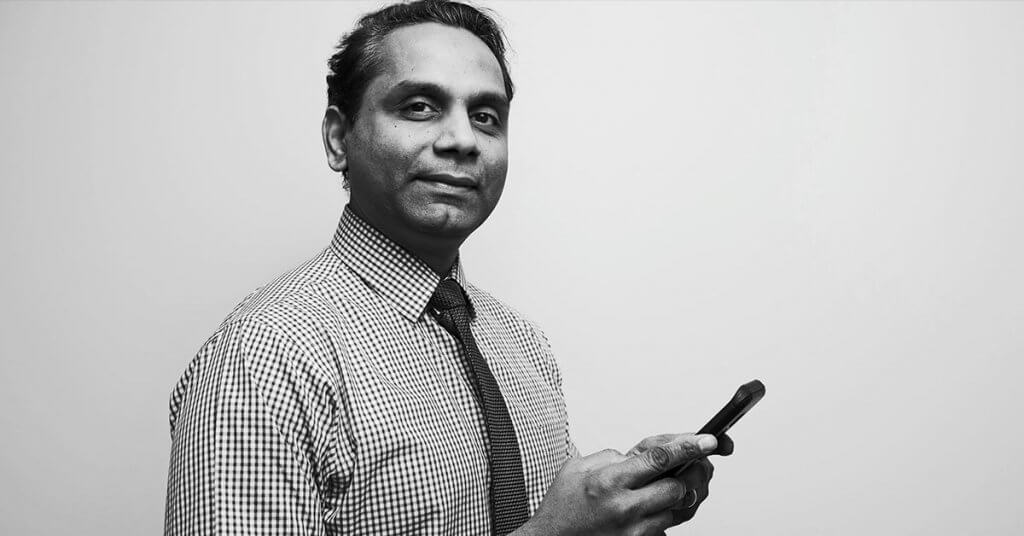 As the kids say: it’s like Uber, but for circumventing the barriers to gainful employment faced by newcomers to Canada and precarious freelancers.

As a prominent member of the local Indian community, Rakesh Naidu, President and CEO of the Windsor-Essex Regional Chamber of Commerce, has often found himself fielding calls from the parents of South Asian international students unable to find work in Windsor. For a time, Naidu did his best to help families in what he calls “a very manual way”: placing phone calls to local companies, attempting to match available students to open positions. As the number of international students in the area increased, this became more difficult.

“I was getting so many phone calls from students who were desperate to find work all over Canada,” says Naidu, who himself immigrated to the country as an international student in 2001. “Speaking with some of my friends and others in the community, I’ve dealt with the presumption that international students are lazy, don’t want to work, or have a lot of money. No! It just didn’t sit right with me.”

According to Naidu, the app’s innovative “flexible availability” tool allows users to communicate complicated, “dynamic” schedules to prospective clients, who in turn are able to fill immediate-occupancy positions in real time. The software also includes integrated messaging for organized client communication. Only employers are allowed to initiate conversation—think women on Bumble—and AyeWork authenticates and confirms employer and jobseeker profiles using a multi-part verification system. Naidu assures us that all user information is encrypted to preserve privacy.

The app launched softly on January 17 and racked up over 1,200 users within its first two weeks. “We’ll start our marketing efforts shortly, and we expect that number to increase exponentially,” says Naidu.

The release is a timely intervention. Both St. Clair College and the University of Windsor have significantly expanded their international recruitment efforts in recent years. The University’s graduate-level engineering programs alone, for example, admitted 1,599 international students in 2019, way up from 269 in 2010. According to the most recently publicly available data, about 40 percent of Saints and 30 percent of Lancers are now visa students.

While AyeWork was conceived to address the needs of newcomers to Canada, it promises to be useful to any jobseekers with itinerant freelance work lives or otherwise complicated schedules—basically, natives of the gig economy. “These are jobs that may not be conventional 8-to-5 positions and that come up at any time,” says Naidu. “When the demand arises, there is a way to fill it in real time, without needing extra labour or extra bodies that increases the cost of doing business.”

Far from the first smartphone app to connect jobseekers and employers, AyeWork ostensibly finds itself in competition with major multinational players like ZipRecruiter and LinkedIn. Naidu is unfazed.

“We think we’ll be able to take on the big boys,” he says bullishly. “We are providing a solution to a problem that many industries have, which has not been answered or solved by any of the big platforms that exist. None of them are equipped to do it, and none of them have the machine learning and AI interfaces we’ve built.”

According to Naidu, the app is a collaborative effort between a team in India and a Windsor-based group including University of Windsor and St. Clair College students. Harpreet Virk, a personal friend of Naidu and the proprietor of “YQG Technologies Inc.,” is the lead developer. Naidu and his team developed AyeWork as “ordinary citizens”; it is not specifically a Chamber of Commerce initiative.

Currently, the app is available in 26 languages for iOS and Android. Plans are underway for expansion into the United States, United Kingdom, Australia, and New Zealand.

For the time being, AyeWork is entirely self-funded. Naidu plans on canvassing Canada and elsewhere to explore possibilities for venture capital, angel investment, and other means of generating revenue as his operation “scales up.”

There is currently no cost to use the platform, and Naidu insists jobseekers will never have to pay to use it. “Eventually, as we move forward,” he explains, “we will have a payment model for businesses that reflects their size and number of postings, so that we can keep this sustained.” For Naidu and his team, the real work is just beginning