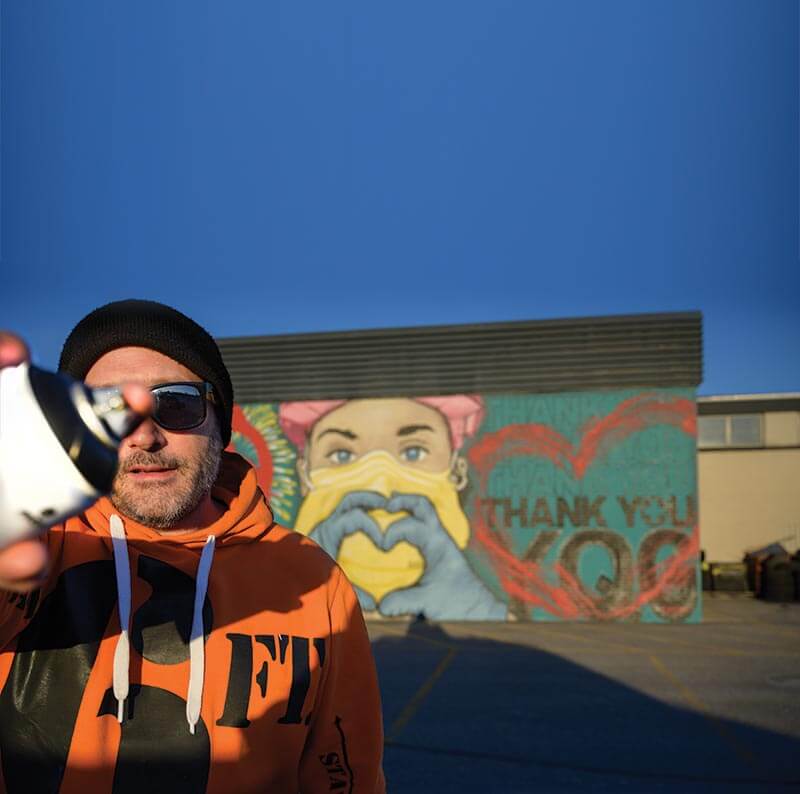 Andy Warhol once said, “Art is what you can get away with.” Good art challenges perception. It turns a mirror on society, it shocks, and it pushes boundaries.

“I have believed for a long time that your attitudes, ideology, the relationships you foster, the travelling you experience, and one’s beliefs can all help to design your entire life into exactly what you want it to be,” explains Daniel Bombardier, aka DENIAL.

The prominent Windsor artist, who specializes in graffiti and mural work, has made his painting a mirror on society.

“We all create our own worlds, and that world can be as big or small as you will it to be,” he muses. “I would say that the very act of creating art and expressing oneself is boundary-pushing. I think it is up to the artist to determine how far you want to push it and what you see as a boundary. For me, personally, I broke that gauge off a long time ago.”

Bombardier grew up the oldest of five children, an experience he cherishes, but also one that forced him to strive for more. “For me, creativity was sort of born from necessity as a kid with my brothers and sisters,” he reflects. “We grew up modest and we made our own fun out of not too much. As most kids, we were very imaginative, and I guess, for me, I luckily just forgot to grow up.”

As a child, Bombardier’s grandfather Henry, who was a painter, instilled in him an appreciation for painting and creativity. However, Bombardier says that his flair for art caught fire in his early teens when he discovered the DIY aesthetic and attitude of punk rock and skateboarding. “It helped to form my ideology and my own style,” he says. “Skateboarding is something you do with others, but it is really something you practice and get better at alone. I found a lot of similarities between skateboarding and creating art. It is as if both are you-versus-yourself in a lot of ways, and I really fell in love with both.”

“I began painting graffiti in the late ’90s and, in the beginning, I painted DANIEL,” he recalls. “I soon learned that you should not paint your real name, and I switched a few letters around to form a powerful word and name—DENIAL.

DENIAL was a deeply complex pseudonym that Bombardier would have to grow into. “Over the years, it has certainly meant a lot more to me and others following my work,” he states. “As I learned more about the world—that social justice, politics, and capitalism run amok—I saw the prevalence of denial everywhere. I also began learning graphic arts and began forming a style by merging traditional graphic processes and graffiti techniques. This all led to a lot of stickering and fostering and promoting DENIAL as this sinister clandestine brand.”

The stickers were hard to avoid in the mid-’00s. Lampposts, mailboxes, tables in bars, you name it—soon, DENIAL was everywhere. “I have shared and given a lot of free stickers out over the years, and I always thought it was rad to see where they would end up,” smiles Bombardier. “For me, sharing my stickers was also a way to involve others in what I was doing, which has led to a lot of fun and some friendships.”

Bombardier’s murals are thought-provoking masterpieces. The 44-year-old spends much of the year touring North America, slathering on paint in bold, brightly coloured metaphor that grabs the attention of the beholder and transfixes them—daring them to dive deeper into the piece and its subversive subtext.

“To me, DENIAL is a sarcastic gut punch to the status quo of consumerism,” states Bombardier. “Everything is fair game to poke fun at and show the truth about dark topics through my art. DENIAL is a way I can encompass a lot of different ideas under one absurd brand.”

Anything can be an inspiration in the world of DENIAL. The art is organic and flows from him like dark poetry. “Everything inspires me daily. Being alive on an asteroid, hurling through the vast void of outer space inspires me—but, mostly, social justice and consumerism,” he quips. “Through my work, I try to express anger and frustration that change does not always happen quickly. I generally try to utilize some forms of humour—tongue-in-cheek or shock value—to jolt viewers into pausing and looking deeper into the meaning of my work.”

In September 2017, Bombardier was commissioned to paint a mural, Detroit Is the Future, in the city’s Eastern Market. Little would anyone suspect that, two years later, he would be in a legal battle with Mercedes-Benz over the piece. “Mercedes Benz—no comment,” he laughs. “This lawsuit was settled out of court. What I can say is this, stand up for what is right. Do not let corporations get away with bullshit.”

He and several other renowned mural painters in the area were sued by Mercedes-Benz after the company used their murals as the backgrounds in a series of Instagram advertisements. In March 2019, the artists had threatened a lawsuit against the company for copyright infringement but were sued themselves. The lawsuit challenged whether the painters owned the trademarks of their work or if it was technically public domain.

In 2020, it was announced that Bombardier’s mural, Never Say Never, which he painted for Detroit’s Murals in the Market in 2017, was going to be torn down. Locals voiced disapproval of the 100 x 35–foot mural’s destruction. However, in its place, a new glass building will be constructed, featuring the work of DENIAL.

“The owners of the build began planning a building and invited me and another artist, Sheefy McFly from Detroit, to design the glass enclosure to surround the entire building. It’s pretty crazy that I will have a four-story ‘mural’ in Eastern Market for the next 100-plus years—so rad!”

The art of painting a large-scale mural is complex and intricate. It covers a lot of real estate, so the pressure is on for the artist to tell a story worth telling.

“I would say the biggest challenge to telling a story on a large mural would be finding a balance to the aesthetic and the surroundings while staying true to the story I want to tell,” explains Bombardier. “I try to make the work stand out while complementing the peripheral world it will exist in.”

He also likes to engage the public while he is working and even tries to incorporate aspects of the conversations into his work. “This leaves viewers with a unique experience to the mural… as an ambassador to my work far beyond me leaving town or the area. It is also fun talking to the people that will be living near the piece to hear their thoughts.”

Bombardier thinks that Windsor has all the ingredients for the same urban art renaissance that we currently see in Detroit. “[Windsor has] the accessibility to Detroit and everything going on over there—an international market right next door, access to international travel 25 minutes away at Metro Airport, and so many more things—if you look for it. There are so many positive opportunities in our area—you just might have to polish the turd to really see it like that sometimes.

“I sometimes wish Windsor would really embrace its completely badass history as well,” he adds. “Windsor’s story is so damn punk rock, and we are a DIY city from the get-go. I say f*** you to anyone that calls my home the armpit or whatever—or any of those other stupid connotations. Our city will kick your city’s ass—believe me.”

Bombardier’s plans for 2021 revolves around “HOME.” Since June 2020, he has been redesigning his studio space into one massive art piece. He says that it will be his largest exhibition to date.

“My canvas is the entire building at 510 Pelissier St.—the roof, the alley, and basement will become an all-encompassing art experience,” he explains. “HOME explores my inspirations from Windsor and Detroit but, also will show how I dealt with quarantine lockdowns and isolation.

“It is starting to look ridiculously awesome here and I am excited to share my biggest exhibition to date with my hometown. I am immensely proud of Windsor for a lot of things, and I spread the word. Wherever I go, I show Windsor in a positive light. Some people think I am simply mad or angry at the city or the mayor or the politics here and, yes, I am sometimes, but it’s only because I love the damn place so much—so, just chill, honey bunnies.”

Windsor: Then and Now

One person can make a BIG difference