A Crazy Idea with a Cause 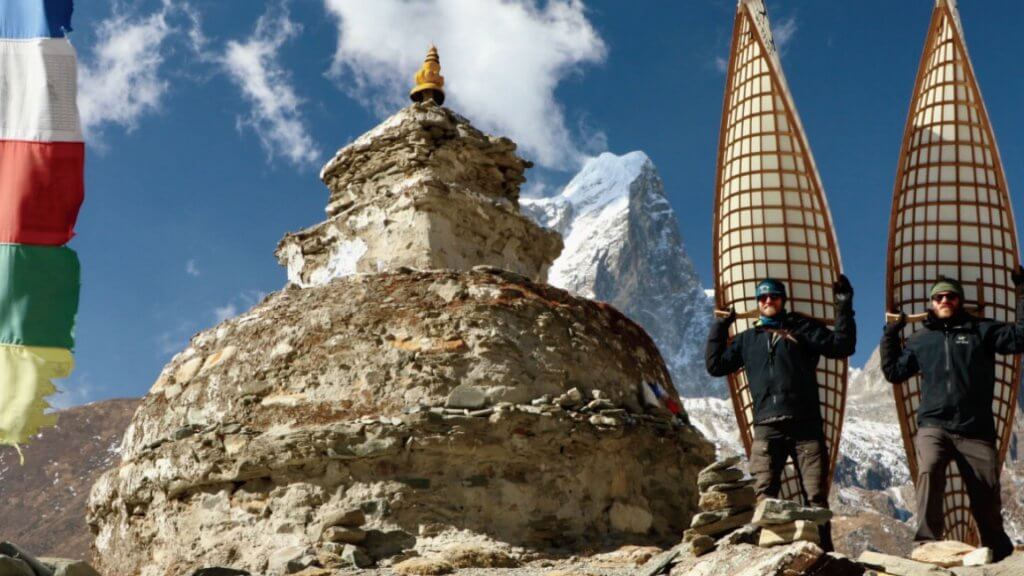 Like all of the best adventures, Tom Schellenberg’s and Kyle Roberts’s started with a crazy idea.

Two years ago, on their previous trip up Mount Everest, the two brothers thought, How cool would it be to do this again, but with canoes on our backs?

Growing up, the two loved being outdoors—hiking and portaging—so naturally the canoes were a good fit. But the canoes wouldn’t just be for the extra weight and challenge. These canoes would be a symbol.

The brothers came up with The Weight We Carry, where the canoes would become a visual representation for the invisible weight added to those living with mental illness. For Tom and Kyle, it was important that they raise funds for natural disaster–related mental illness

“The world pays attention to natural disasters, but not from a mental health perspective,” Tom tells me. He speaks about the 2015 earthquake that affected Kathmandu and regional areas of Nepal. “Millions were left without the basic necessities, 9,000 died, and without any help mentally, it’s not a great recipe. We’re trying to impact that around the world,” he says

The brothers knew joining up with the Koshish National Mental Health Self-Help Organization would make the difference. Koshish’s program supports those between the ages of 16 and 50 with mental illness and any psychosocial issues. The starting goal for Tom and Kyle’s Everest Expedition is to raise $150,000 in order to build Koshish a female transit home—a place where women can stay to receive emergency mental health services. This way, the funds Koshish receives can be spent on emergency mental health services rather than rent.

“I really have faith in humanity when I see that everyone can come together for this common goal. Everybody in life wants to be part of something bigger than themselves and this is that kind of opportunity. It’s a purpose that’s bigger than just one person,” Tom says. He and Kyle have already raised $27,000 prior to their trip to Everest

Tom says they are estimating the trip will take them 33 days, not including the time it will take to pick up the canoes in Kathmandu and drive to their starting location. They’ve factored in injury days every six days, and days to acclimate to the higher altitude. Tom explains that once hikers get to a certain elevation, the next day rather than going to the next town, they hike about the same height but then come back down and sleep in the same spot. This helps the body with the next milestone. They have been training and preparing, but they must always be prepared for the unknown

Though the altitude is not as high as Mount Kilimanjaro in Tanzania, the difference is Tom and Kyle are going through the mountain range of the Himalayas. They will be constantly climbing and descending, which is taxing on the knees, not to mention the physical toll it’ll put on their backs now that they’ve introduced the canoes. Along with their extensive training schedule, a physiotherapist has been giving the brothers tips on how to maintain their shoulder strength and back flexibility to eliminate the possibility of injury

“Injury is our number one concern for not completing the trek. At the end of the day, if that’s what happens, it’s okay. Our ultimate goal is to impact mental health worldwide,” says Tom.

Tom and Kyle have even been carrying canoes with their logo on it around their homes of Vancouver and Melbourne to practise walking with the extra weight, but also to get the word out. They’re hoping they’ll surpass the first donation checkpoint and be able to give Koshish more funds to help with services

Excited to get back to Nepal, Tom feels it was there where he was in the best mental state of his life. “When you’re in a kind of day-to-day society, it’s so chaotic,” he says. “But when you’re on the road, you break down the human needs. Whether it’s portaging, or travelling in general, you’re focused on the basics: Am I safe? Do I have a roof over my head? Something to eat? It’s so simple and relaxed. Plus, the Nepali culture is very spiritual and calming on its own,” he says

After two years of planning, 19 days of solid trekking through unimaginable conditions, The Weight We Carry has finally arrived at Mount Everest Base Camp! To make a donation to the cause, visit www.theweightwecarry.com.