At St. Clair College, students have built Ontario’s most popular collegiate intramural cricket program, and a skyrocketing international student population has found a wellspring of camaraderie, community, and friendly competition thousands of kilometres from home
Author: Jesse Ziter
Photographer: Syx Langemann
1 year ago
|
No Comments
Share On
Share on email
Share on facebook
Share on twitter 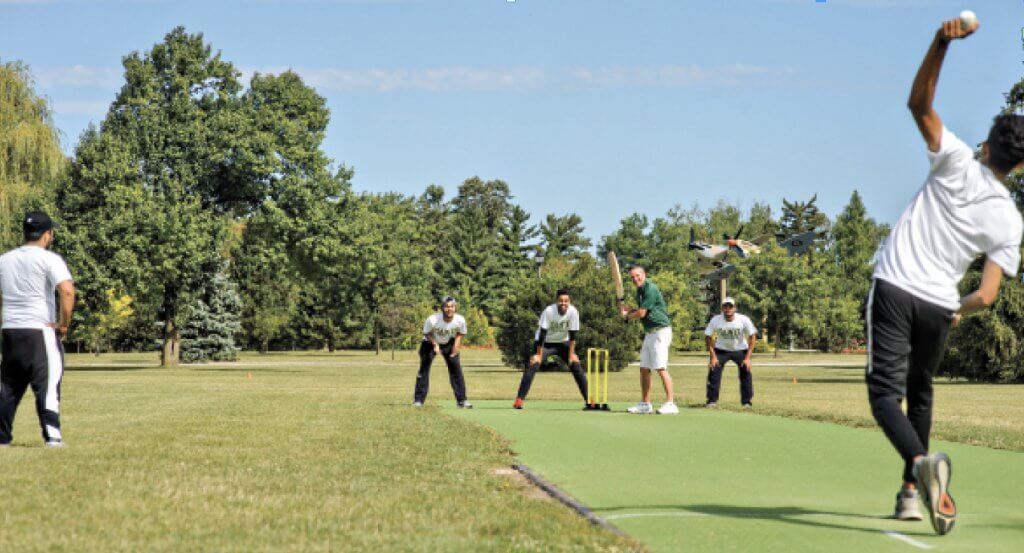 Ragad Badda announced his retirement from his favourite sport the day before he left for Canada. He had no idea how wrong he was.

“I said ‘That’s it, Dad,’” recalls the St. Clair College International Business Management student. “This is my last day for cricket.’”

In his native India, Badda participated in the national pastime at a high level from the age of 10, including a stint with a representative team for Punjab, his home state. While he had resigned himself to letting the game go to further his education abroad, today, much to his surprise, Badda is part of an ever-growing coterie of international athletes on a Canadian college campus where more students play intramural cricket than intramural hockey.

“In our country, it’s a saying that cricket is a religion,” says Kshitij Punj, a third-year Sport and Recreation Management major at St. Clair who also hails from India.

While this sort of proclamation is a staple of the sport fans vernacular, it’s truer in this case than most: the world’s second most popular game is a major monocultural phenomenon in its second most populous country. India’s 1.3 billion people share a single major sport, and important cricket matches can fetch more than 300 million television viewers there alone. (The Super Bowl, as a point of comparison, reaches around 100 million North Americans.)

Although the sport’s political, celebrity, and economic stakes are much lower on this side of the Atlantic, plenty of people—particularly members of the South Asian diaspora—play and care about cricket here, too. It turns out there are few communities in Canada where the game has caught on more than it has at St. Clair College.

Let’s set the stage: Over the last few years, St. Clair has drastically expanded its international enrollment. The institution’s projections for the fall 2019 semester—just beginning at press time—suggest that more than 4,700 international scholars currently call St. Clair’s Windsor or Chatham campuses home. In other words, just shy of 40 percent of Saints are international citizens. A great many come from India and other cricket-playing nations, including Bangladesh, Sri Lanka, and Pakistan.

These numbers signal a serious sea change for the college, which had fewer than 600 international students as recently as 2016.

Concisely, the demographic shift represents a deliberate response to increasing financial pressures in the wake of provincial government directives and institutionally costly changes to Ontario’s Employment Standards Act. The question of whether this represents a positive development for postsecondary education in our region is complicated, but it’s undeniable that the face of St. Clair has changed meaningfully.

A few years ago, Corriveau became exposed to cricket through casual conversations in his business communication class, which attracts international students. “Our intramural athletic programs are about including all students,” he explains. “The population has changed a little bit on campus, and we want to make sure that everybody is invited to participate. I started making some general inquiries and found out there is obviously a significant amount of cricket being played in the community.”

Something of a trailblazer, Punj is the first international president of St. Clair’s Student Athletic Association and the first Indian-born student in his program. Back home, he was a recreational cricketer and a nationally competitive track star; he still holds the 400- and 800-metre records for his state. After a brief flirtation with the Saints’ cross-country team, Punj turned his attention towards his studies and a burgeoning leadership role in campus athletics.

The college held its first intramural match in February 2018 as part of a league involving about 80 students. The second season saw that number swell to 145. Most recently, there were 197 participants, plus a waitlist comprising seven full teams of prospective players.

As Punj understands it, the previous record for the largest intramural program on an Ontario Colleges Athletic Association (OCAA)–associated campus was 184 players.

“Back home in India, it’s huge to represent your institution,” shares Punj. “When we started the program here, people wanted to go out for St. Clair. We saw all these varsity athletes getting recognition, and we knew we could do that too, but in our sport!”

You might be surprised to learn that cricket at St. Clair began as an indoor program; it turns out much of the collegiate game played in Canada takes place in gyms.

“What fascinated me when I started to learn about the game,” says Corriveau, who comes from a golf background, “was that cricketers are incredibly adept at altering the way they play the game based on the space that’s available to them. You could go to downtown Windsor and find students playing in a parking lot; it’s brilliant.”

“We could play cricket right here,” agrees Punj, gesturing across a cramped meeting room used by the Student Athletic Association.

“We were already playing in streets and parking lots,” adds Badda. “My Canadian friends were curious about what we were doing!”

These days, the program has expanded out of doors. During the warm-weather season, St. Clair uses City of Windsor pitches at Jackson and Optimist Memorial Parks and on 8th Concession Road.

Plans are underway for an official outdoor playing surface on campus grounds, ideally as part of the college’s $21.5-million Sports Park development, slated to open in April. Cricket balls are harder than baseballs, which necessitates certain safety considerations—for students and the college’s new $500,000 scoreboard alike—but the institution is open finding a solution.

While the OCAA has yet to recognize cricket as an official varsity sport, St. Clair has begun to send representative teams of select intramural players to “extramural” competitions at other Ontario colleges.

It also fields a championship-winning team in the Southwestern Ontario Cricket League, a local 10-team men’s competition away from campus.

A week after our conversation, Punj, Badda and their mates participated for the first time in the Canadian College Nationals, an annual invitational that brought 16 teams from Ontario, Quebec, and Nova Scotia to King City, Ontario (about 10 kilometres north of Vaughan). The Saints would go on to finish first in their group but fall in the quarterfinals to Algonquin College.

Although it’s easy for ignorant Canadians to find cricket impenetrable (for me, it’s ranked somewhere between Quidditch and Calvinball in intelligibility), the St. Clair campus cricket community has piqued the interest of Saints of all stripes.

Punj notes that, as his program has grown, domestic students, faculty, and college executives have all stopped by to try their hand at the sport. “We’re not rigid in that you have to know cricket already to play,” he stresses. “We’re offering it for student life as a whole.

Perhaps predictably, baseball players have been among the first to express enthusiasm.

“People in North America are crazy about baseball, and this involves a similar swing at a different height,” Punj explains. “We’ve had a lot of players from our baseball team come to our intramurals. When they come out to play cricket, they don’t position the bat the way they should, but they still swing it hard.

Some things, it turns out, are universal.