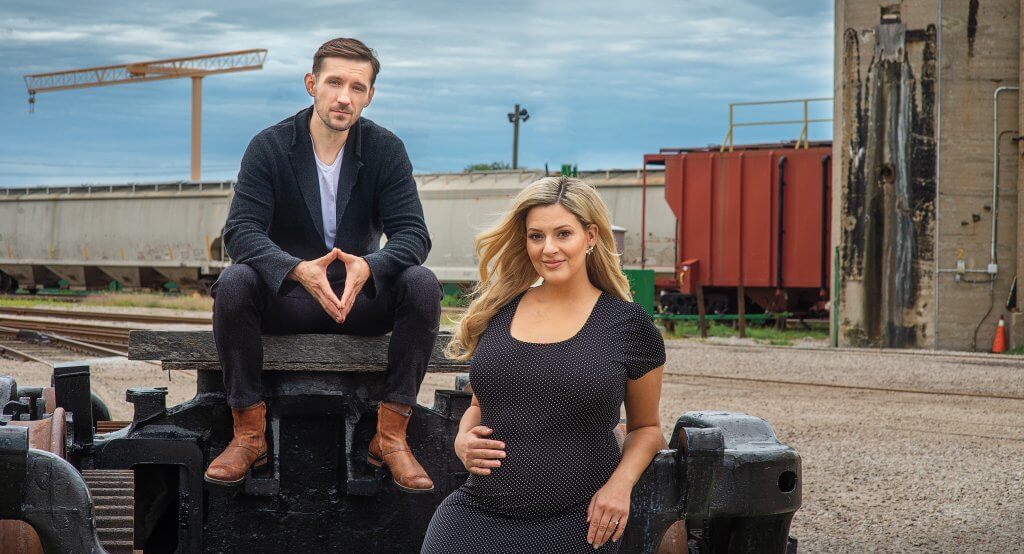 It was 2001 and time for the end-of-the-year film assignment in the grade 10 communications class at Holy Names High School. Corey Mayne, a student who was interested in film and animation, asked fellow students Barbara Szeman and Adrian Jaworski to group up with him to create a 20-minute horror film. What should have been a quick project ended up changing their lives.

Before this class, Barbara and Adrian had known of each other, but when Corey cast them as love interests, their film relationship grew into a personal one. “After this class, we grew closer,” says Adrian. Much closer. Now, the two are married, expecting their first child, and have reunited with Corey to create their short film, Willa, which is currently moving through the film festival circuit.

So what happened over the past 18 years that led them to create one of the largest-scale short films in Canada?

“Corey at the time was ahead of his game in visual effects. After he finished his schooling at Sheridan he immediately got a job at Pixar in 2005,” Barbara explains. “That inspired my pursuit in film.” Corey ended up moving to Los Angeles to take the job.

From adventure to experience

In 2009, Barbara and Adrian were working in Windsor, and after watching their friend’s growing success in L.A., they moved to Toronto “on a whim” to follow their dreams of working in film: Barbara behind the scenes and Adrian as an actor.

Adrian laughs, “Barbara was like, ‘Let’s get into film!’ I packed up a TV and a small duffel bag, and was like, ‘Alright, we’re moving to Toronto!’ I quit nursing school. I knew if we’re going to be in, we’re going to be in. And we went in hard. We had no money, we were totally broke. I don’t know what we were thinking back then. With the Toronto rent, we had to grind it out.”

Barbara wanted to work behind the scenes. When she got to Toronto, she sent out 100 emails and one response gave her the opportunity she needed. The two of them also worked with director Gavin Michael Booth, who was featured in last month’s DRIVE. She volunteered on sets of music videos and got a job on The Score on the Sports Network.

“That experience led me to be a production assistant on RoboCop and from then on I worked on several feature films and eventually I got to be assistant director on them. I also wanted to make my own films. Corey and I kept in touch, saying one day we’re going to do something together,” Barbara explains. She also joined the Directors Guild of Canada.

While Barbara was finding her way behind the scenes, Adrian was acting, bartending, and finding other ways to make money. He bought couches on Kijiji and then sold them for four times the price after cleaning them and selling them. “That’s how hard we were hustling in Toronto,” he explains.

When the two saw the market in Windsor pick up for housing, Adrian saw his opportunity to return to Windsor to complete his nursing degree, and drove back and forth every week between classes in Windsor and acting work in Toronto. “Acting was destroying me, so I was doing gigs on the side while in nursing school. One time I was driving to Windsor on the 401 and my agent called me and said I had an audition for Covert Affairs. I had gotten as far as London and I took the very next exit, turned around, and drove all the way back. I did really well. I’d read the nursing manuals and scripts and record them to listen to while I was driving on the 401, memorizing lines going to Toronto, and studying the nursing notes while heading back to Windsor.”

Meanwhile, Corey had moved back to Toronto in 2010 to pursue work in TV and film. He has worked on shows such as Game of Thrones, Twilight, Vikings, and currently, The Handmaid’s Tale. Soon after moving back, he and Barbara worked on the film Poltergeist together, and were inspired to work on independent films again.

And the idea to make a short film of Stephen King’s short story “Willa” was born.

Barbara had worked on feature films like Suicide Squad and Downsizing and got to know the crew well, keeping close relationships with fellow colleagues. “The crew knew my passions of producing and writing, and I got almost the entire crew of Suicide Squad with professional equipment to be on the crew of Willa,” Barbara explains.

When the time came for production to begin on the trio’s first film together in 17 years, Barbara had amassed a crew of 100 of Toronto’s finest filmmakers, who volunteered their time for Willa.

“We didn’t want to take a step back and make something smaller,” she says. “We wanted this to be the same high level of the films we actually work on. Going the horror route, we are all diehard Stephen King fans. We saw an opportunity with Stephen King because he’s an accomplished writer and the story is there. And then we can focus on the creative part, bringing out what we want from the story. At least we know the story is there. He makes frightening and compelling drama.”

King also has a program that allows filmmakers to use the rights of his story for $1. What came with a King story was an automatic interest and established following among his fans.

With all the professionals involved and the equipment they used, the film should have cost at least $2 million—the team made it for 2 percent of that.

“With filmmaking in general, I’ve learned a lot of the techniques and what they do on set day to day,” Barbara says. “Nothing went wrong. We had the most experienced crew in the industry, everyone worked well together. We couldn’t have made this without the people who supported us in the Toronto film industry.”

Willa had its premiere in L.A. last month and is heading towards WIFF and other festivals. They even have investors interested in making a feature film.

In 2018, five months after wrapping Willa, Barbara and Adrian married, and now they’re waiting for their next adventure due on Friday the 13th of December, nonetheless.

“I’m so grateful for all of it,” Barbara says.