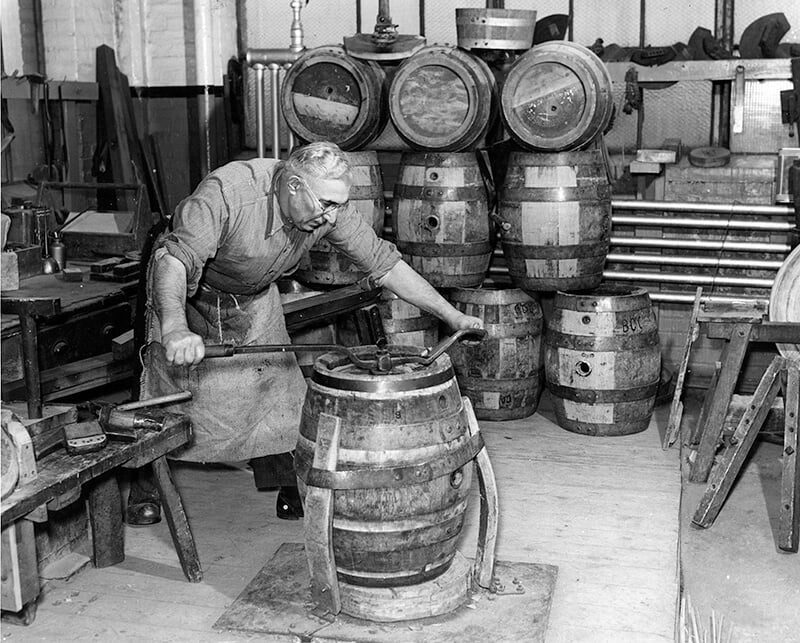 The rise and fall of Windsor, Ontario’s Original Six breweries is a tale of brew masters, risk-takers, gangsters, roadhouses, and the transformative impact of Prohibition on Windsor’s brewing industry.

Despite a lack of local brewers, it wasn’t as if Windsor was a dry town. Our forefathers could easily enjoy fresh beer in this region. “Back kitchen” home brew, neighbour Detroit’s well-established brewers, London, Toronto, Montreal and other regional brewers helped quench our ancestors’ thirst.

Detroiter Louis Griesinger Jr. erected one of Windsor’s earliest breweries at the corner of Bruce and Sandwich (Riverside), then built a small home across the street.

Griesinger had apprenticed at the massive Christian Moerlein Brewing Company in Cincinnati; his father Louis Sr. was an architect who designed and built many of Detroit’s finer breweries, including the famous Stroh facility. Griesinger Jr. found a market for his first batch of Cincinnati style beer in Chatham; its first six barrels were well received. A spur-of-the-moment conversation with an agent resulted in branding one of his brews as “Cincinnati Cream.”

Before long, Griesinger’s Cinci cream ale appeared locally; within a few years, the brewery shipped considerable quantities of brewed-in-Windsor beer to Detroit. B-A eventually expanded to encompass four city blocks. From a few hundred gallons in its first year, production steadily increased to 5,000,000 gallons annually by the mid-1950s. Cincinnati Cream Ale became a beloved brand on both sides of the border.

Griesinger died from injuries sustained in a fall at his brewery in 1902. In 1912, his brother-in-law Louis A. Irion was named president and brother Raymond Irion became secretary-treasurer. In 1927, the Irions brothers sold their interest in the B-A brewery to brokers in Detroit.

Following the success of the British-American brewery, whisky magnate Hiram Walker expanded his extensive business interests into beer brewing in 1889. Walker erected the imposing Walkerville Brewery on a prime parcel at the corner of Walker Road and Wyandotte Street. As with most of his ventures, Walker’s brewery became a great success.

Following Hiram Walker’s death in 1899, his son Edward Chandler gifted a majority stake in the thriving Walkerville brewery to his childhood friend, Stephen A. Griggs, vice–president of Hiram Walker and Sons. In 1925, Griggs sold the brewery to Detroiter Herman Radner, a purported member of Detroit’s infamous Purple Gang, and father of actress Gilda Radner.

During the wild Prohibition years — 1920 to 1933 — savvy local brewers exploited Ontario liquor laws, which forbade public and hotel drinking, but did not prohibit the manufacture and export of intoxicating beverages. Across the Detroit River, the manufacture, sale, and transportation of liquor was banned, which led to the shuttering of every Detroit brewery.

While Windsorites did their fair share of illicit beer drinking during Prohibition, thirsty Americans became our two local brewers’ best customers. Strategically located only one mile from a parched city, Windsor brewers graciously shipped boat loads of beer to our neighbours.

Three breweries sprang up in Windsor and the Border Cities during Prohibition to capitalize on exports to Detroiters — and to brew 4.4% beer for locals.

The Tecumseh Brewery opened in 1927 in a building erected in 1912 by the Dominion Cannery. The Tecumseh Brewery enjoyed a couple of profitable years but once U.S. Prohibition was repealed in 1933, it was forced into bankruptcy. The building remained vacant until the Old Comrades Brewery formed in 1947 by World War II veterans and colourful local Prohibition-era millionaire Harry Low.

Riverside Brewery, financed by Detroit’s notorious River Gang, an organized group of Sicilian mobsters. flourished for a time during Prohibition with its strategic waterfront location near Peche Isle. The brewery’s export dock took advantage of its convenient location at the junction of Lake St. Clair and the Detroit River. The River Gang’s speedboats could zip from the brewery to the gang’s operations on Belle Isle.

Hofer Brewery in LaSalle was another brewery that took advantage of Prohibition-era legal loopholes and illegal smuggling for so-called export beer. The Hofer Brewery’s location was ideal; several nearby islands sheltered speedboats loaded with cases of Hofer’s Select Lager, as they glided across the Detroit River downriver to Ecorse and Wyandotte, Michigan in the dead of night. The Hofer Brewery building is the last remaining Original Six brewery structure in the Border Cities.

On both sides of the strait, proprietors operated blind pigs, speakeasies, roadhouses, inns, and hotels where patrons could gamble, dine and drink — at least until the cop raids. Our waterfront became a magnet for American revelers seeking illicit pleasures at our spectacular roadhouses, including Bertha Thomas’ Edgewater Inn, The Rendezvous and Abars, each a glittering jewel strung out along the Detroit River and Lake St. Clair. Rich and famous Americans nightly traversed the mile-wide river to moor their yachts until the first glimpses of dawn, greeted by owners and employees decked in their finery as if from a scene from an F. Scott Fitzgerald novel.

Before WW I, there were over 300 full-fledged breweries in Ontario. By the end of the Prohibition, only 70 Ontario breweries were left standing, many struggling to survive.

Enter vulture capitalist E. P. Taylor (nicknamed “Excess Profits”), chairman of Canadian Breweries. Taylor became one of Canada’s richest men on the backs of hard-working local brewers, forging one of the world’s largest brewery franchises. He did more to reshape the landscape of local beer than anyone in Canadian history. His means were ruthless, threatening holdouts with price wars then buttering them up with lucrative buy-out schemes.

E.P. Taylor eventually purchased every Windsor brewery. Taylor acquired the British-American Brewery in 1928 as a piece in a long-term plan to control and consolidate Windsor’s beer business. As with other Ontario beer brands, the British-American name eventually disappeared, the plant renamed Brading’s Cincinnati Cream Brewery, a subsidiary of Brading’s Brewery. Despite its massive production capabilities, B-A was shuttered in the 1960s.

Walkerville Brewery ceased operation in the late 1950s, while British-American folded in 1969. By the 1970s, Windsor’s Original Six brewers had disappeared from the landscape and eventually, our collective memory. It was the end of an era.

But lately, something unexpected and wonderful has happened. Fifteen local craft breweries have emerged, focused on tastes underrepresented in Ontario’s consolidated beer market. Walkerville Brewery was reborn under the guidance of Mike Brkovich in the same neighbourhood where Hiram Walker brewed his famous beers.

We’ve only scratched the surface of the Brewed in Windsor here; we invite you to read more in our latest book, “Brewed In Windsor.” To purchase a book, please visit www.walkerville.com

Luis Mendez – The Path of Most Persistence

Put a Time Limit on Negativity