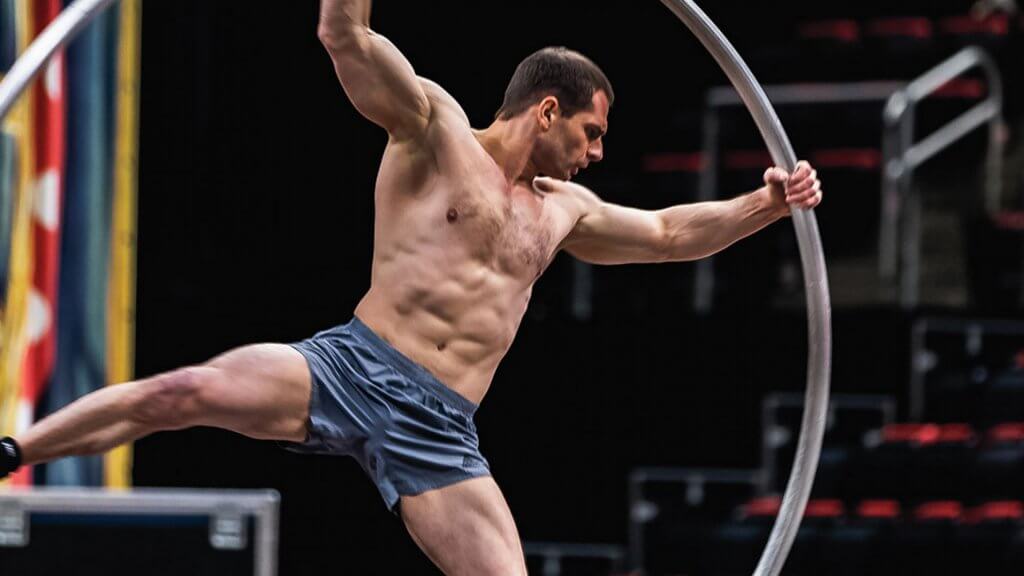 Immerse yourself in the power of Corteo, the show tours to the WFCU Centre from May 15 to 19. You can buy tickets here

Harvey Donnelly was seven years old when he saw his first Cirque du Soleil show with his mom. Wide-eyed and thrilled, he realized then that performing in Cirque would be an exciting career. Now, he is in his ninth year with the company and, at 27, he is just as excited as he was when he started.

“It’s a passion. I was originally a trampolinist and was used to flying in the air. It was about transitioning from a gymnast to being an artist.”

Donnelly comes from an arts-driven family: no one else is an acrobat, but they’re all actors. Of course being an acrobat is dangerous, but it’s also “adrenaline-fuelled,” Donnelly explains.

When I interview Donnelly at Little Caesars Arena in Detroit, a group of gymnasts are rehearsing on the stage, readjusting their wrist grips, chalking their hands, pulling themselves up on the high bar, and then flying through the air. As they each finish their set, they go again and again. Each time, they cheer each other on with a quick embrace or a pat on the back. Offstage, a group of jugglers are practising for their scenes, while Artistic Director Mark Shaub travels to different meetings with performers, journalists, and crew members.

Cirque du Soleil began in Quebec in 1984 with a small group of 20 street performers. Today, the company has 4,000 employees across the globe, and employs 1,500 workers at the Montreal international headquarters alone. Currently, there are 19 different shows being performed worldwide and the company is still entirely Canadian-run.

Corteo, which means “cortege” in Italian, is a joyous procession, and the show, written and directed by Daniele Finzi Pasca in 2005, is the first Cirque show that Shaub worked on.

“Your first one, I think, always stays in your heart,” Shaub expresses. “It was kind of my baby and I was very thrilled when I was asked to go back for the last year of the Big Top tour because it was nice to have those bookends: see the show in the beginning and then, after 10 years of touring, see how it had grown and matured and gelled and gotten better.”

Corteo began as a Big Top: the show was performed in a tent, which would take seven days to set up and three and a half days to tear down. In 2015, Shaub was hired to close the Big Top show and work as artistic director for Corteo as part of an arena tour that began touring in 2016. Now, the show takes only 12 hours of preparation and four hours of teardown.

An artistic director “gets involved at the show near the end of creation,” Shaub explains. “Then they take the show on the road and maintain its artistic quality and allow the show to develop, grow, and mature at the same time as keeping it true to its initial intent.”

“It was still the same show, but it was just so much richer and so much more textured and layered. When Cirque did decide to transform it into an arena show, I knew the challenges and knew it was a huge undertaking but I really wanted to be there to be part of that and to make sure we would do the best possible arena version of this show that’s close to a lot of people’s hearts.”

As with other Cirque du Soleil shows, Corteo’s plot is a wistful dreamscape of music, acrobatics, and poetry. The character is both the protagonist and the viewer, telling a story while also experiencing the beauty of it. Corteo centres on Mauro, an aged actor on his deathbed, who begins “imagining, participating, and dreaming” about his funeral.

“The show starts with a procession of his life going past his bed and he’s getting more and more involved in it and more into this life passing before him,” Straub explains. “As the show develops, it’s really not about his passing; it’s about his life, and a celebration of that life.”

Corteo is not a morbid drama. Shaub promises, “It’s not at all about death, it’s about life. And it’s about celebrating that life. His life was a life spent in the circus, so it’s about all the characters he spent time with in the circus—the acrobats, the different situations he found himself in.”

When it comes to traditional theatre, an audience may expect a thorough story line, but Cirque shows have developed a unique form of storytelling that is more about the spectacle.

Shaub clarifies, “You can’t think of this as a play where there’s a script. It’s more abstract than telling a story. We’re doing it with music, movement, acrobatics, humour, everything combined together to create more of a spectacle than storytelling. We manage to tell a story and convey emotions rather than give you a story that you’ll remember. It’s more about the feelings, emotions, humour, the love that comes back from looking back at one’s life.”

In the beginning, the performer cast as Mauro was Italian, and the current Mauro is Spanish. But the dialogue that is included in the story is mostly English, although sometimes lines are spoken in a variety of languages, which reflects the show’s universality.

“A lot of times, at funerals, there are moments where we take time to talk about all that was good about somebody and the many things they did, and this show is no different.” Shaub believes everyone around the world can relate to celebrating one’s life.

Shaub comes from a contemporary dance background. He worked as a dancer in Montreal for 20 years. “It came time to think about doing something else with my body. Cirque is based in Montreal, so lots of people from the arts migrate to Cirque. They are a major employer with a lot of opportunities. I had known former dancers who ended up here and there was an opportunity in 2005. I had just had shoulder surgery, Corteo was already in creation, and they were looking for someone to take it on the road.

“I somehow got interviewed and somehow got the job with no experience whatsoever. Right place, right time.”

It’s not an easy decision to be part of an arena tour. “It’s worked out really well for me. It’s a physical job [and] a difficult lifestyle because we’re on the road. We have people who come and go for various reasons. Some leave for a while and then come back. Some people in [this tour of Corteo] were in the original 2005 creation.”

As I interview Shaub, I notice a string of flags hanging from the ceiling backstage. He tells me they represent the home countries of the cast and crew—23 different flags. “Every combination working together,” he smiles.

Donnelly tells me why he continues to be a part of Cirque. “This line of work is what I’m most proud of doing. You finish your work and you feel so proud of what you’ve done. I also enjoy flying through the air. It feels like yesterday I was looking up to the adults, watching them fly and perform these big tricks and thinking maybe one day that could be me. And now that is me.”

Cirque is about magic, it’s about seeing life represented on stage through different stories expressed through bodies, costume, music, and dedication. “If you’re doing something that can go into a circus, you have to be passionate about it. You have to work extremely hard to be as good as you possibly can be and then you have to put yourself out there,” Shaub explains.

“Don’t believe that Cirque performers come from these far distant lands,” Donnelly says. “They all come from small towns and places like everyone else. You just have to dream big and be passionate about what you do and committed and one day you will find yourself on the stage,” Donnelly encourages.

Corteo currently employs 109 people who travel on the road together, as well as 200 people in each city who work the technical side of the show.

Shaub promises the arena tour is just as intimate as the Big Top tour and that it’s the “best version they’ve done.” Corteo will immerse you in a story about a man at the end of his life, choosing to focus on the people he’s worked with, the memories he’s made, the love he fostered, and the beauty he gets to relish in his final days.