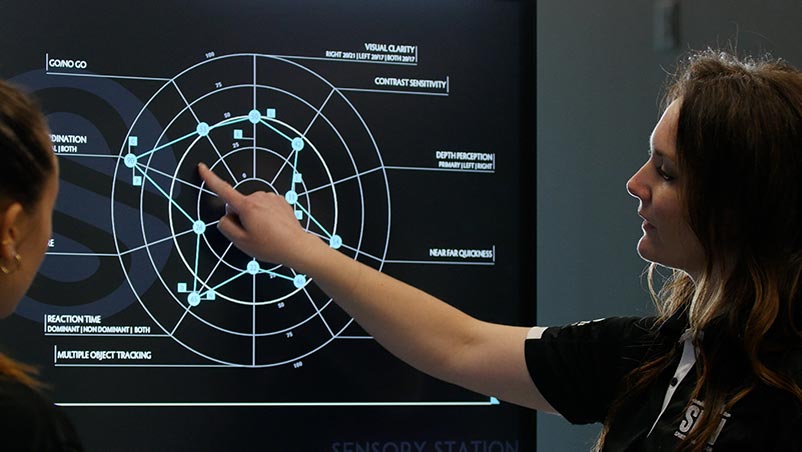 Windsor’s new hub for athletes doesn’t just emphasize working the body; Sports Vision Windsor puts just as much weight into the mental reps as it does the physical ones.

Through established cognitive and visual exercises, owner Melissa Bussey analyzes athletes’ results and curates activities that not only enhances their game but helps to improve processing skills while minimizing injury. The inspiration to translate this visual training into the performance world came from seeing the improvement in those with visual disorders and bringing areas lacking back to the typical range. So, why not try to reach one step further into the extraordinary for performance athletes?

“Vision is the primary sense used in sports. 90% of the information you’re collecting is visual and is being sent to your brain,” Melissa explains the optometry component of the business. By connecting the link between vision and sport, athletes can unlock a hidden potential within; one that isn’t reliant on being bigger, faster, or stronger than another athlete, but rather smarter, quicker-thinking, and wiser than their counterpart.

The programming at Sports Vision Windsor goes beyond testing visual clarity. Melissa explains that vision goes further than we understand, which is why their instruments test athletes’ additional visual skills like depth perception, contact sensitivity, near-far quickness, perception span, multiple object tracking, reaction time, target capture, eye-hand coordination, and go-go-no, all which are imperative to any sport or movement-based activity. By using these tried and true methods, Sports Vision training improves all around visual abilities, which then translates into peak physical performance.

Melissa first heard about these techniques in optometry school and being married to a life-long athlete and sports coach, T.J. Jovcevski, she saw the opportunity to bridge paper to practice. While T.J. was coaching AA hockey, and Melissa was attending their games, she began to see the potential to help them improve.

“We wanted to see the results, so we offered it as a free service to the team, but it wasn’t mandatory,” T.J. explains. Before diving into their permanent space, the original Sports Vision facility was a pilot program, complete with synthetic ice and turf, right in their garage. This beta program was trialled with T.J.’s midget minor group, made up of 15-year-olds.

“It is a tough skill to monitor improvement from the outside. The athlete will notice the difference, but for others its tougher to see, as the athlete isn’t getting physically faster, stronger etc.,” T.J. says. “Knowing what I needed to be looking for, I saw it. I saw them making smarter decisions on the ice.  They were no longer rushing or in ‘panic’ situations and limited the forced pass when it wasn’t there.”

At the end of that pilot year, T.J. pulled five players aside individually and asked them what they thought. Without hearing each other’s responses, all across the board the athletes said, “The game feels slower, and I feel like I have more time to make better decisions,” even though the game was the same length and speed in reality. Once T.J. and Melissa saw firsthand how the Sports Vision training enhanced the players’ reaction time, peripheral awareness, and decision making on the ice, the two felt confident to expand their humble garage setup into their current space.

Their newly opened facility operates in a similar way as the beta program, but with a grandeur that wouldn’t fit into the previous 100 square feet. There are setups and simulations for all sports, including Lacrosse, Baseball, Golf, Football, Hockey, Soccer, Basketball, and beyond, while adding in the technology to take athletes a step further.

The cognitive and visual testing instrument presents athletes with game-like scenarios, starting off simply and increasing in difficulty. For example, the T.V. screen would first have a black background with a neon yellow ball and a neon orange ball light up. The athlete is then meant to press one and not the other. Easy enough, right? But further along, the activity would prompt multiple decisions and even incorporate relevant game distractions like changing lights, coloured backgrounds, crowd noises, music, and balancing.

Once the tests are complete, the instrument can then take the athlete’s statistics and compare them to an athlete at their age, position, and division.  This allows the athlete to see how they would stack up against another in their own ranking or take it up a notch and see what training would be required to move up a rank.

Along with the visual, cognitive, and sport offerings in the facility, Melissa and T.J. have also partnered up with Brogan Probert of Probert Performance to incorporate mental performance training for teams, individuals, and organizations.

“My big thing is connecting the mind and the body. It’s been neglected for so long and we’re finally realizing how valuable our thoughts are, and the power they hold over our decisions in performance,” Brogan says. She guides players through mental skills workshops, mindfulness training, and helps them become aware of their emotions throughout performance.

“It’s my job to help you overcome mental obstacles or barriers that you might not even be aware of. Either because you can’t recognize them, or when you do, you don’t know how to change them. These accountability techniques help shift that mindset to help you perform your best mentally, so that it translates physically.”

Given the challenges of the last year, building confidence and mental capacities in athletes will be crucial for coming back into the games. Teams and athletes haven’t competed in a year, and there’s a lot of pressure on bouncing back quickly. Melissa, T.J., and Brogan all take building on this resilience training seriously, and that extends beyond professional or team athletes.

“If you have a body that moves in any way, you’re an athlete,” Melissa says about the team working with those who want to come in and build on their flexibility, those recovering from a concussion, or just for sports lovers who want to get back into joining their friends on the field.

Melissa and T.J.’s devotion to athletes doesn’t stop at their doors; you can find them working after-hours curating exercises, attending athletes’ games, and rooting for their teammates long after they’ve left the facility. The work at Sports Vision Windsor stretches beyond sports and performance; they’re in the business of building a community. Once you train with them, and your signature is hanging proudly on their chalk wall, you are part of the team for life.

Five Steps to Thriving and Growth