How a career carpenter carved a new lane for himself and became one of Essex County’s most commercially successful artists
Author: Jesse Ziter
Photographer: Syx Langemann
3 years ago
|
No Comments
Share On 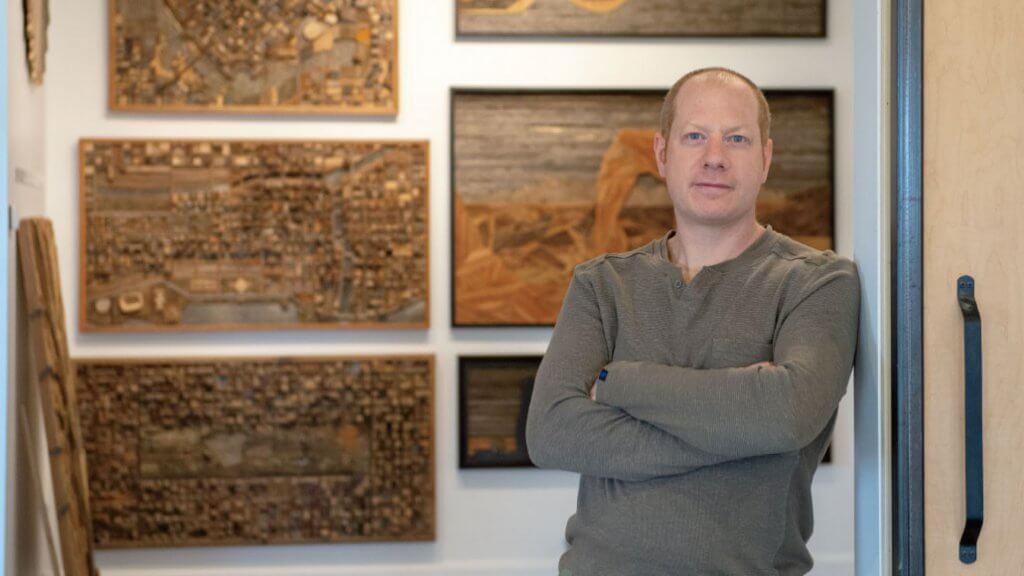 Thanks to one unlikely Stoney Point artist, there are pieces of Southwestern Ontario in Swiss ski lodges, Nevada casinos, Lululemon outlets, Harvard University hallways, and refined private residences from Maidstone to Melbourne.

“I had to get out of the trade and quit construction altogether,” he recalls, “but I had all these skills, and I didn’t want to give up anything with woodworking. I had to think of something else to do.”

So, Forget converted his one-car Windsor garage into a makeshift workshop and started experimenting with less taxing, more creative woodworking projects. Before long, he found himself shipping fireplace mantel beams throughout Ontario via a rudimentary online store.

Eventually, Forget started playing around with barn wood. He came to find greater success with a series of improvisational wall art compositions than the larger architectural pieces he’d initially prioritized.

Forget now makes wall art on a near-industrial scale using lumber salvaged from barns, homes, and businesses across Southwestern Ontario, saved from bonfire pits and landfills. A single piece might use five, six, seven types of wood—ashy, dull, rich, dark, bright, or light—each aged anywhere from a decade or so to well over a century.

“A lot of the wood I have is from minutes away from where I grew up—barns I’d driven past for fifteen, twenty years,” Forget explains. “You can trace some of it and it’s been built, torn down, and reused more than once. It can have more than two or three lives. I do find it interesting that a lot of this stuff is going to be dispersed throughout the world.”

Over time, Forget’s oeuvre has evolved to encompass simple abstract compositions and more detail-oriented, painstakingly arranged work. His multilayered geometric pieces begin with a small pile of resawn wood fragments. Held together with glue and virtually invisible micro-pin nails, some pieces end up as non-representational compositions, while others turn into detailed studies of natural phenomena. One noteworthy piece represents a geological formation from Arches National Park, Utah; another a famous tree from Yosemite. “I let the piece of wood actually direct me to where I want to go,” says Forget.

Forget’s intricate cityscapes are his most immediately arresting pieces. His scale map of Chicago, a standout, took more than two months of consistent work.

Across the board, Forget takes an almost painterly approach to his raw materials. He finds fall foliage in a rich swatch of mossy green lichen. A shock of blue-grey wood makes for good water. He sprays on a low-VOC water-based sealant to lock everything in place, freezing it in time.

A friendly, free-wheeling conversationalist, the 39-year-old artist can speak eloquently about wood—and he does. He perks up noticeably when pointing out a sliver of barnboard with a whisper of faded red paint—painted barn wood is usually pine, but this is a hardwood. Nearby, a rack of quarter-sawn sycamore boards from his brother’s 1800s house reveal a pinkish, almost iridescent colour.

He’s particularly drawn to boards with traces of light green moss or variegated lichens. “The most neglected wood has been my most precious wood, believe it or not,” he stresses. “It comes in so many colours—colours that you can’t replicate by trying to stain or paint it.”

Forget opened an Etsy shop in 2012 after a brief period exhibiting at art shows and maker fairs like Art in the Park. Today, he still sells on that marketplace (where he has a five-star rating across more than 200 reviews) in addition to his own private website. Log in today and you’ll find about 90 listings, ranging in price from just over $500 to more than $23,000. Forget’s commercial sweet spot seems to fall between $1,000 to $3,000, but he offers fairly substantial discounts to local clients.

As it stands, Forget estimates 95 percent of his work ends up in the United States, but he’s also dispatched plenty of pieces to the UK, Australia, Germany, France, and elsewhere in Europe. Locally, you might recognize his large exterior signs for the Walkerville eatery Carrots N’ Dates or Lakeshore St. Andrews Church.

While Forget keeps a lower profile within Windsor-Essex than some of his contemporaries, he’s friendly with reclaimed wood artists like Michael Difazio, Todd Lindsay, and Steve Pomerleau of FLO Hardwoods. “I feel that I am part of a large art movement that has been growing in the area,” he explains. “What’s great is those guys don’t do what I do, so I don’t feel threatened.”

Two years ago, Forget relocated his practice to a purpose-built, 2,500-square-foot workshop that shares a large Lakeshore lot with his impressive family home—and his four-year-old daughter’s treehouse. “I actually designed the house in a matter of hours, but this shop took me months,” he laughs.

It shows: the scale of the operation is genuinely surprising. The bright, functional, and almost impossibly clean space is kitted out with professional-grade amenities, including three-quarter-inch plywood walls with a glassy lacquered finish, restaurant-patio-style windowed garage doors, heavy-duty air filtration units, an overhead heater to cure finishes, a hand-built kiln to bake out infestation, and a dedicated spray booth area with its own ventilation system. The structure also includes a small, white-walled gallery space and an office.

The workshop’s clean, minimalist aesthetic aptly represents its environmental footprint. “The reason I got into reclaimed wood is I have a love for nature,” he explains. “I don’t want to use any more wood than I actually need to, so I try to use every stitch I can.”

To this end, Forget keeps discarded strips of wood to use as kindling and uses sawdust as fertilizer. He even reclaims packaging materials. His pieces are flat-packed for shipping using double-plied cardboard sheets repurposed from area greenhouses and corner guards made from leftover backerboard plywood.

“I probably produce less garbage than anybody else on this street,” he notes.

All in all, in his short career in the arts, Forget estimates he’s sold well over 1,000 pieces, hitting triple figures in good years. Not bad for a backup plan.

He smiles. “If you told me right at the beginning that I’d make money being an artist, I probably would have laughed at you.”