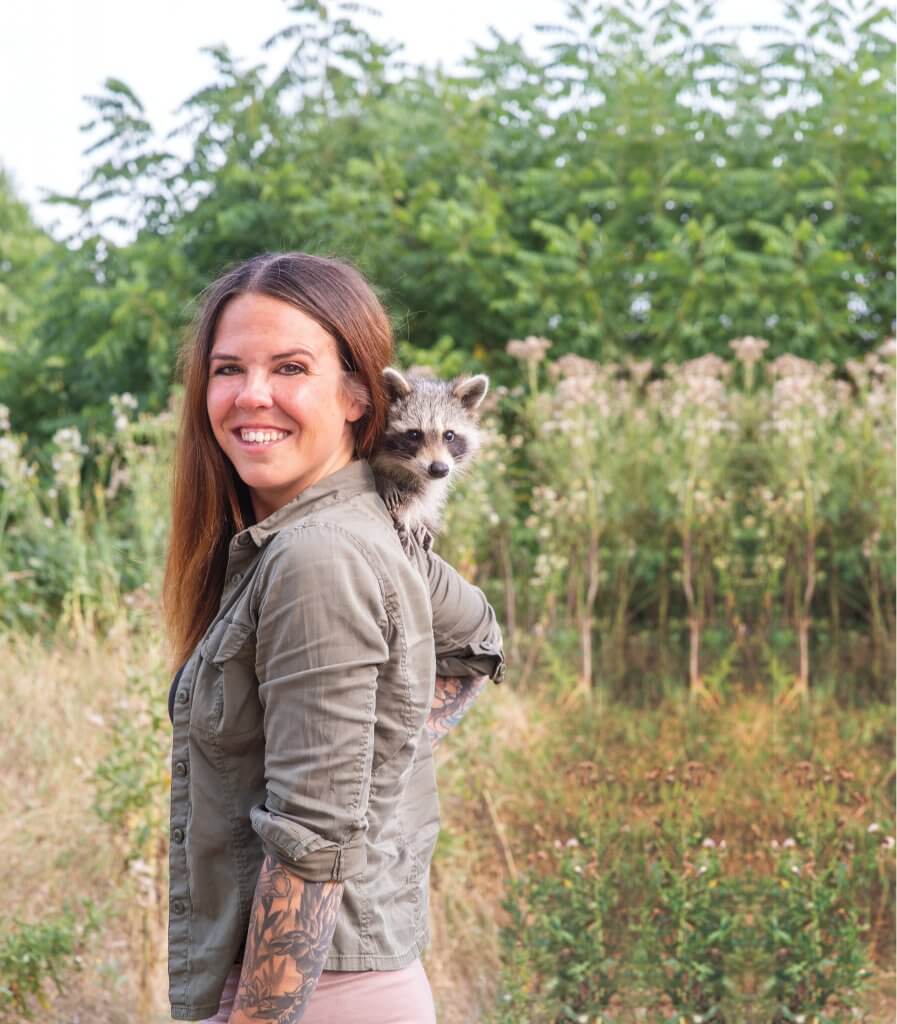 Mama Kate knew she wanted one of her next animal rescues to be raccoons—she just didn’t know how fast it would happen.

During one of the worst storms of the spring, she got a call from Hailey at Safe Haven Farmstead and Rescue saying that the neighbour had found two raccoons that needed help. Their mom had been hit by a car, leaving them alone, and the storm had blown them out of their tree.

“Those raccoons were in possibly one of the worst conditions we’ve ever seen. They’d gone a week without any nutrition whatsoever, the wind was knocked out of them, and their eyes were sunken in,” Hailey says. She warned Mama Kate that they were in a bad situation, and she didn’t have high hopes that they would make it.

But it was in Mama Kate’s nature to try, and as she drove through the storm to get them, Hailey found the third raccoon.

“They went from lethargic with no life in them to climbing all over her,” Hailey says about the animals’ instant connection to Mama Kate. “She was able to get them to feed in minutes; it was unbelievable how quickly she was able to bond with them.”

With their chance of survival, Mama Kate took the three back to “The House of Oakley” with her, where they were appropriately named: Storm, Rain, and—because “Hail” didn’t stick—the third was named Hailey.

Growing up on her family’s 290-acre land, Mama Kate was used to being surrounded by wildlife and nature. Rehabilitating animals was embedded into her at age five, when she found and rescued her first animal—a little half-pound grey kitten whose eye was sticking out—whom she appropriately named Popeye. From that moment on, she lived by her family’s motto: if an animal showed up on their property in need, they would do everything they could to help them.

Even with her experience, Mama Kate wasn’t oblivious to the fact that she needed help with each new species she took in. The raccoons had taken a dramatic turn within a week, but there was still a lot she’d have to prepare for to make sure they were ready to be released back into the wild.

“Normally, raccoons would stay with their moms for about a year and she would teach them everything. Since their hormones kick in sooner than that, I have to teach them in a short amount of time,” Mama Kate says.

Ashlyn, Mama Kate’s dog, is a second mother figure to the raccoons. She doesn’t have pups of her own, but she has fostered this relationship with them. Mama Kate allows it, but teaches them to be afraid of other dogs so they don’t approach people’s pets, or think of coyotes as friends when they’re out in the wild.

Mama Kate built their muscle strength and memory through kiddy-pool fishing lessons and by running her hands up trees to inspire them to climb. With her aid, the raccoons were four weeks ahead of where babies would normally be.

“We’ll have them a few more months but they’re already wanting to venture out on their own,” Mama Kate says about taking them out back where they’ll eventually be released. It’s the perfect area because it’s wildlife protected, with no risk of hunters or traffic, and filled with other raccoons. Mama Kate hangs windchimes so they can always hear when they’ve gone too far, but every once in a while, when they can’t see her, they’ll come back and check. As much as they are cute and lovey with her now, by 16 weeks, she says, they’ll want nothing to do with humans.

“It’s all about giving them enough love until they don’t need you anymore.” She speaks from experience. Before the raccoons, Mama Kate rehabilitated two squirrels: Oakley and Willow. Willow was ready to be released before Oakley was, but eventually, when he was ready, Oakley released himself.

Mama Kate can still see the animals from time to time as they roam around the property, but she keeps a respectful distance.

“You can live alongside nature in a way that doesn’t harm them and still enjoy your own space,” Mama Kate says. “People see raccoons as a nuisance, but at the end of the day, we’re moving into their habitat and they’re just adapting to ours so they can survive.”

Mama Kate knows raccoons can be destructive—so they’re definitely not pets—but she wants to show people another side of wildlife that makes them reconsider the way they look at them.

“I want people to understand and respect that they need to eat, too. They’re also benefitting the environment by keeping our rodent population down and are a great predator to have in the ecosystem.”

Hailey adds that it’s important for us to speak up for these animals, because they don’t have a voice. It’s our job to protect them as best as we can.

“There are certain aspects of the world today where we ignore the roots we grew from, and we don’t spend enough time getting to know the inner mother nature we all have. If we put the screen down, maybe we’ll notice that a bird fell out of a tree, or we could help a turtle cross the road.”

This slowing down and reconnecting with nature is what will help us co-exist peacefully and successfully with wildlife.

Some tips from Safe Haven Farmstead and Rescue and Mama Kate on how to co-exist with wildlife: