The Holidays are on Full Display at Willistead Manor
Author: Jen Brignall-Strong
Photographer: Trevor Booth
2 months ago
|
No Comments
Share On 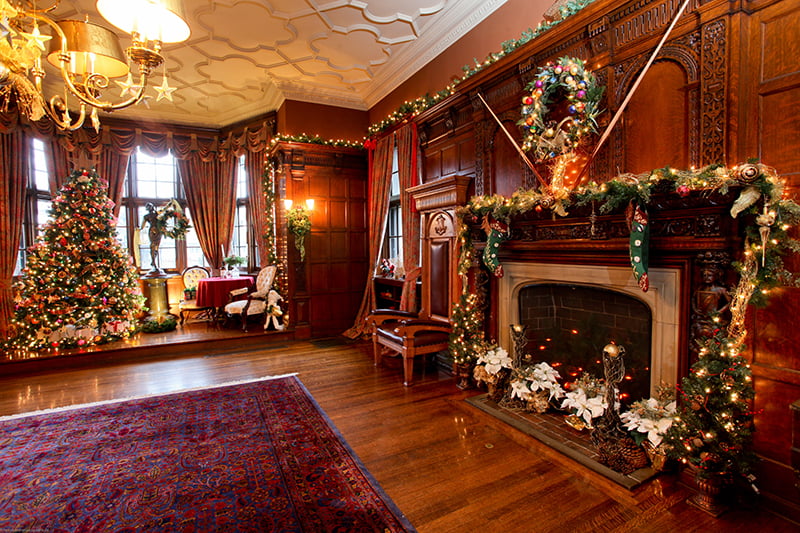 After a two year hiatus, one of Windsor’s most beloved holiday traditions returns to historic Willistead Manor.

The Willistead Manor Holiday Tours allow local residents and visitors from all around to tour one of the area’s most elegant and storied mansions all decked out in its holiday finest.

The tradition began nearly four decades ago with the Friends of Willistead group, but was put on hold for the past two years due to COVID-19 restrictions.

“We certainly missed being able to welcome folks inside the home,” says Christopher Menard, Cultural Development & Willistead Manor Coordinator for the City of Windsor. “We’re all looking forward to opening the doors wide once again for people to explore this special, one-of-a-kind place.”

Menard says it was difficult to see the manor closed during the pandemic, but the time was used to get some important work done, including the installation of the new Coach House Historical Exhibit.

Now, the Manor is refreshed and ready to welcome the public with festive flare, featuring over 14 rooms adorned with twinkling lights, greenery, glittering ornaments, and breathtaking Christmas trees.

“Decorating Willistead is quite a process. Planning begins months ahead of time,” says Connie Pitman, President of the Friends of Willistead. “The spirit of each room is taken into consideration, along with what we’ve done in the past.”

Pitman says it takes about four days of hands-on decorating by teams of people including Friends of Willistead volunteers, interior designers, City of Windsor workers, and St. Clair College student volunteers working collaboratively to bring it all together.

“The Friends of Willistead are very excited about resuming the Christmas tours, a long-time Windsor tradition,” says Pitman. “We’re eager to show off the Manor in all of its splendour and share information about its history.”

Menard notes that during the time Edward and his wife Mary resided at Willistead, they held parties that were called “At Home”, filling the halls with people who wanted to be together, celebrate, and explore the Manor. Today, he says, they honour that tradition of being a community gathering place, hosting various events throughout the year, including the holiday tours.

“We’ve always wanted to use the holiday season to showcase the Manor in a special way; dress it up and invite people in to see something whimsical, magical, even a little bit of another time,” shares Menard.

In addition to the tours, there’ll also be several holiday events hosted at the Manor, including a performance by The Silver Bells Bell Ringers on December 11th and Breakfast with Santa on December 4th, 11th and 18th catered by Thyme to Go. Tickets for the breakfast event can be purchased at www.thymetogo.ca. The Willistead Manor Holiday Tours run Wednesdays, December 7th, 14th, 21st and 28th from 6pm to 8pm and Sundays, December 4th, 11th and 18th from 1pm to 4pm. Admission is $6.25 for adults, $5.25 for students and seniors, and $2.75 for children 12 and under.