Dressed to Impress: How A Local Family Bottled Success 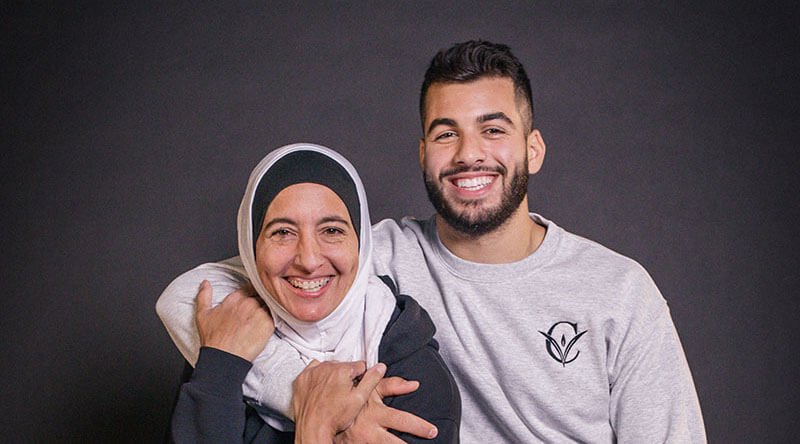 Started when Ameen was just 16 in Lakeshore, a spark of an idea has flamed into a thriving business venture with a growth that shows no signs of slowing.

Surria Fadel, Ameen’s mother and business partner, comes by her talent for cooking honestly. With an entrepreneur as a father, she grew up around the restaurant business where food was always an important part of her childhood.

“I wanted to nurture this within my own family,” says Surria. “I made sure my kids were always helping out in the kitchen — we always encouraged them to cook, experiment, and try new things.”

Luckily, the Fadels have always been generous in sharing their talents with those outside of the household.

As a family with five children, teachers at Belle River District High School were very familiar with the Fadels by the time the youngest, Ameen, entered the classroom as a freshman. Years of Surria sending along delicious home-cooked dishes with older siblings to potlucks and other school activities over the years had earned a following of students and staff alike.

“By the time Ameen came through the school, the teachers were putting in requests,” says, Surria, laughing. “With him being number five, it felt as though they were in mourning for the dishes they had come to love — they knew that once he graduated, the food would stop coming.”

It was at school that the Fadel’s kitchen talents became something new. In May of 2015 when 16-year-old Ameen heard the announcement of a $3,000 grant opportunity being offered to student entrepreneurs at his school, he leapt at the chance to start a business— even though he didn’t yet have a specific venture in mind. It was through conversations with his guidance counsellor that finally brought about an ‘a-ha’ moment.

“After having a hard time coming up with my big idea, it was my guidance counsellor, whose son I played hockey with, who finally reminded me how great my mom’s Fattoush salad dressing was after having tasted it on a couple of occasions,” says Ameen. “She reminded me of the time that another mother of a player on the team had told us we should bottle the dressing, and at the time we just laughed. This was the moment when we realized that we had our concept right in front of us.”

At last, Ameen had his big idea, and it was time to build a business. Initially the secret sauce wasn’t so much of a secret as it was a mystery — even to the Fadels.

Surria admits that before the business, there wasn’t one specific recipe she had been using for the now perfected formula — ingredients were added and measured intuitively, which ensured a delicious, albeit inconsistent end result. Ameen knew that his product needed to be standardized, and so him and Surria undertook a series of experiments to determine what would become his flagship dressing.

They searched around for other Fattoush dressing products to include in their taste tests, finding that there were none locally in Canada — with the closest options being in Dearborn, Michigan. Using several of their own recipes and the externally purchased competition, Surria and Ameen administered a blind taste tests to friends and neighbours, opting against including their own family members in the trial.

“We really wanted to use the palate of non-Lebanese people to get a sense of what the general market would prefer,” says Surria.

Six months of such experiments led to the creation of a recipe that is now Cedar Valley Selections Fattoush Dressing — the product of hard work, community support and family tradition.

Once bottled, it didn’t take long for the product to move.

“Ameen’s locker was filled with dressing, which teachers were buying from him at school,” says Surria.  “At work, my own colleagues couldn’t get enough of it — we were selling bottles by the caseload when we finally decided to try moving to a Farmer’s Market in spring 2017”.

From recipe to retail

When asked about the transition from locker-sales and Farmer’s Markets to corporate stores, Ameen talks about the first location his product was ever stocked in — Wayne White’s Fresh Meats and Deli, which is incidentally right next to his high school.

“I was incredibly nervous to pitch it. I remember walking in and essentially saying ‘Hi, I have this product. Want to sell it?” to which he essentially said ‘Yeah, sure,’” says Ameen. “It was really cool, but scary to have them take a chance on me. It was just so amazing that our product was there for people to buy. “

At the time, Ameen could have never imagined what other shelves his product would one day line.

“I never thought that we would ever be in Sobeys or stores across Canada.  I just wanted to prove the concept, so the fact that he brought it into his store made me believe others would too.”

When asked about how he managed to do just that — get his product into the grocery chain, he shares that it was simpler than one would have expected.

“Just like I did when I walked into my very first sales pitch, I went up the manager at our local Sobeys in Tecumseh and told him about our products and asked if there was any interest in carrying them. As a big supporter of locally produced products, he was on board immediately,” says Ameen. “He initially ordered 10 cases of both our pita chips and Fattoush dressing, and I struggled to keep my face straight in the meeting.”

“I couldn’t believe what I was hearing when he came back with the news — it was the biggest order we had ever received,” laughed Surria.

This was in early 2018, and soon after, other locations across the region started stocking Cedar Valley Selections — from the original Tecumseh store to Amherstburg and London, before receiving a call from Sobeys’ corporate operations offering a chance to become part a local product program. This meant that by April 2019, they were in Sobeys Ontario — where over 200 stores would have the option of stocking Cedar Valley Selections in-store.

“It was a really big moment for us,” explains Ameen. “It made us think that this could be something big.”

Today, Cedar Valley Selections has grown from a single salad dressing to ten different products, including the brand’s pita chips — originally created as a compliment to Fattoush, of course.

When we discuss what has made Cedar Valley Selections a success, both Ameen and Surria credit the importance of finding community. The pair agrees that networking has been a major focus in helping to grow their business — they’ve made it a priority to connect with likeminded entrepreneurs, particularly those in the food business.

“We’ve found some very helpful people and mentors that have played a huge part in our growth and learning as entrepreneurs. In particular, the Small Business Centre here has held seminars that we’ve found to be very beneficial,” says Surria.

As well, leveraging each other’s unique skills has worked to the advantage of the business-owners — Surria manages what’s ‘in the package’, including research, product testing and development, whereas Ameen’s oversees what’s ‘outside of the package’ — namely branding, distribution and sales.

For any others, particularly young people considering the path of entrepreneurship, Ameen is happy to pass along advice garnered from his own journey.

“Ask as many questions as possible, and don’t be afraid to do so. Network as much as possible. There’s been a lot of people in your shoes, do your best to find them. Ask for insights, guidance, and learn from the mistakes and triumphs of others to expedite your growth,” says Ameen.

“Look at the big picture. Try to look at the long term rather than the short term. Technically our idea formed in 2015, but our first year of big-picture thinking happened in 2019-2020 — sometimes I wonder what could have happened if we had started even earlier.”

Surria champions the importance of the mental game when it comes to making it as an entrepreneur, and in her case, moving from recipe to retail.

“If you believe in what you’re doing, avoid the negativity of people trying to bring you down. Be prepared to fail, that’s how you learn” says Surria.  “It’s a tough ride, but try staying around other entrepreneurs that understand the journey. Keep people close to you that will pull you forward, — we’re all in this together.”

Interested in supporting local? Shop Ameen and Surria’s products online and use Cedar Valley Selections’ retailer finder via their website to discover stockists near you.