If You Want to Go Further 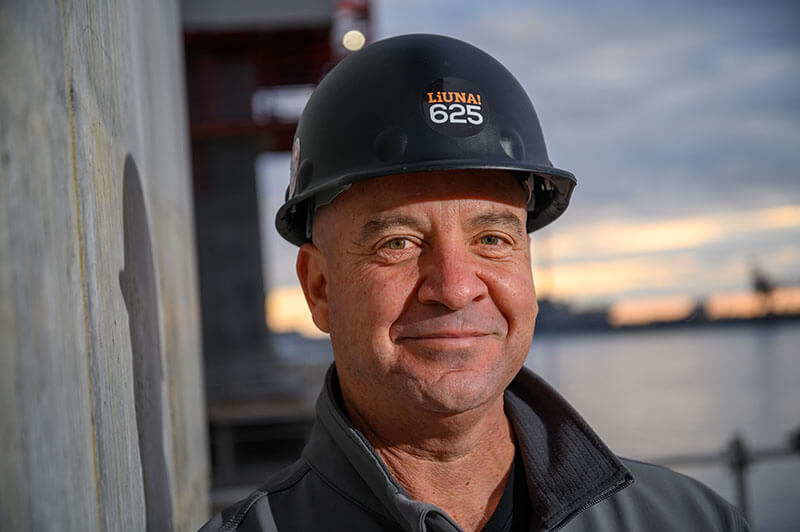 The Labourers’ International Union of North America (LiUNA) wants to go far, and it wants to take as many people along for the ride as possible. There are few simple truths that lie at the heart of LiUNA including: there’s strength in numbers, hard work should be rewarded with good wages and benefits, workers have a right to safe working conditions, and people should have the ability to retire with dignity and security. It will be these simple truths that drive them into the future with so many strong people in such great numbers.

There is a North American proverb that says: “Culture in the workplace begins at the top.”

At LiUNA 625, that’s Business Manager Rob Petroni.  Anyone who knows Rob knows that he does things differently.  For one, he hired a veteran rock musician, Jeff Burrows, as LiUNA’s Community Relations Director.  For another, he is always seeking new ways to look out for members.  That is exactly what he was doing in 2017 when he announced that the LiUNA benefits plan would begin offering medical cannabis products to discourage opioid prescriptions.

Interviewed by the CBC about this development, Rob explained: “Now that we’ve added this, we’re hoping more doctors… will move towards prescribing the cannabis oil as opposed to the opioids.  The most important part of this is to reduce the opioid use and or abuse.”

Rob’s ability to approach situations so uniquely is likely because he has experienced the industry from every rung of the organizational ladder.

Born in Sault Ste. Marie, Ontario, he joined LiUNA in 1987 as a construction worker.  In 1992, Rob moved to Windsor to study Psychology at the University of Windsor and continued working construction during summers to fund his education.

“After university, I worked in the field,” he says, using the industry term for construction sites.  “I worked on the first phase of the Windsor Casino.  As a LiUNA member, when one project finished up, they sent me out to work on another.  I was right on the ground as a Construction Craft Worker, part of a crew pouring cement.”

So, does LiUNA act as a kind of employment agency for members?

“No,” Rob says, “LiUNA is a place that businesses call when they need workers.  If a road builder calls, saying they need a pipe layer, the union dispatches one to the job.  If you need ten workers tomorrow, you don’t have time to put an ad in the paper or on the Internet.  You call LiUNA and we’ll send them out.  The difference is: an employment agency is paid by the employer.  With LiUNA, workers are paid directly by the employer, but we handle the worker’s benefits and pension packages.  Those stay with the worker wherever they work.  They are not tied to the employer.”

According to its website, LiUNA “is the most progressive, aggressive and fastest growing union of construction workers, waste management workers, show service workers and healthcare workers in Canada.”  It is an international union, with members throughout the United States.  Between America and Canada, LiUNA has more than 500,000 members.

As Rob notes: “For every dollar paid to construction workers, seven dollars goes back into the local economy.”

Not only did Rob find employment as a member of LiUNA, but he also found room to move within the organization.

“In 1997, I successfully ran for an Executive Board position of LiUNA local 625,” he continues.  The position provided him with an avenue for his ideas about improving and promoting LiUNA.

“In 2002, I was approached by the Business Manager in London/Windsor to see if I wanted to try organizing,” Rob remembers.  “The International had just started an organizing fund for a new wing of recruiter, because finding skilled workers was becoming a problem.  LiUNA was way ahead of the curve and rolled out a North American wide fund for recruiting.”

Rob was good at his job, and his results were noticed.  By 2006, he was Assistant Business Manager, and in 2009, Rob was elected to his first four-year term as Business Manager, the top position in LiUNA.  In the same year, Rob became an Executive Board member of the Ontario LiUNA Provincial District Council.  In 2021, he was appointed director of Organizing for Central and Eastern Canada.

“When I first became an organizer, there were six of us for all of Central and Eastern Canada,” he says.  “We had a small office on Seminole with a staff of three. There were 400 LiUNA members in Windsor-Essex.  Today, we have an office on Fasan Drive in
Oldcastle, with a staff of 23, and 2000 members county-wide.”

From the beginning, Rob has been doing more than meeting quotas and hitting targets—he has been helping to change people’s lives.

“You have a worker who’s earning $14-an-hour in a job, and then I come along and educate him on how he could be making $25-an-hour with benefits and pension,” Rob explains.  “Joining LiUNA is a game-changer.  You go from struggling in a job to having a career that allows you buy a home and raise a family.  As an organizer, I was invited to people’s weddings.”

It was during that time, heading toward 2009, the general shortage of skilled workers in numerous trades and industries came to light.  Employers had an increasingly difficult time filling skilled positions, and industry commentators began making dire predictions about the impact that would have on the economy.

“It’s a three-year program,” Rob explains.  “We graduate about 32 new journey men and women each year.  All training is free to our members.”

Members are not only enjoying higher wages, but they also receive excellent benefits and a solid pension.

“We have 135,000 members participating in the pension plan,” Rob says.  “LiUNA runs the pension.  If you move anywhere within Central and Eastern Ontario, it’s the same pension, the same organization.  So, workers have full mobility.”

One of LiUNA’s mottos is: “Building Better Communities Together.”

“LiUNA members want to be represented in the community in the best light possible,” says Jeff Burrows, veteran rock drummer and member of The Tea Party.

Many labour organizations are active in raising money in the community, doing charity bike rides, runs.  Rob and LiUNA brought in Burrows, and through its sponsorship of the Windsor Bluesfest—among other events—supports local causes, such as Transition to Betterness (T2B), Brentwood, the Canadian Mental Health Association, and various food banks.

The Bluesfest is a Windsor institution, having brought the biggest names in blues to the city.  In recent years, a need arose to re-imagine the annual festival.  That’s when Rob and his wife, Carol, stepped in.  They formed a non-profit called Bluesfest Windsor, which keeps the festival going, but steers the proceeds toward area charities.  LiUNA stepped in to be a major sponsor.  That’s when Burrows was brought in.

“My role is to make sure everything backstage runs smoothly,” Burrows explains.  “I recalled the best festivals that Tea Party played, usually in Europe, and created an atmosphere like that, from artist treatment, riders, food, to load-in and load-out.”

In 2019, this evolution proved successful.  Among the artists who performed were Vanilla Ice, Young MC, C&C Music Factory, featuring Freedom Williams and 2-Live Crew and Tone Loc.  Buddy Guy and Eric Gales also played.  There was even a tribute to Prince, which saw Morris Day and The Time, Sheila E., Purple Reign and Master of Cool take the Windsor stage.

The name of the festival has further evolved into LiUNA YUNITY, but remains non-profit and volunteer-based.  It’s greatest success to date was the 2020 New Years show “From Ontario With Love A Celebration Of Hope”, hosted online from Windsor’s Capitol Theatre, which celebrated its 100th anniversary.

There is a lot happening a LiUNA 625.  To learn more, visit them online at www.liuna625.ca.