Windsor’s Allesandro Rotondi is living his dream through dedication and a perpetual desire to learn
Author: Tita Kyrtsakas
Photographer: Syx Langemann
3 years ago
|
No Comments
Share On 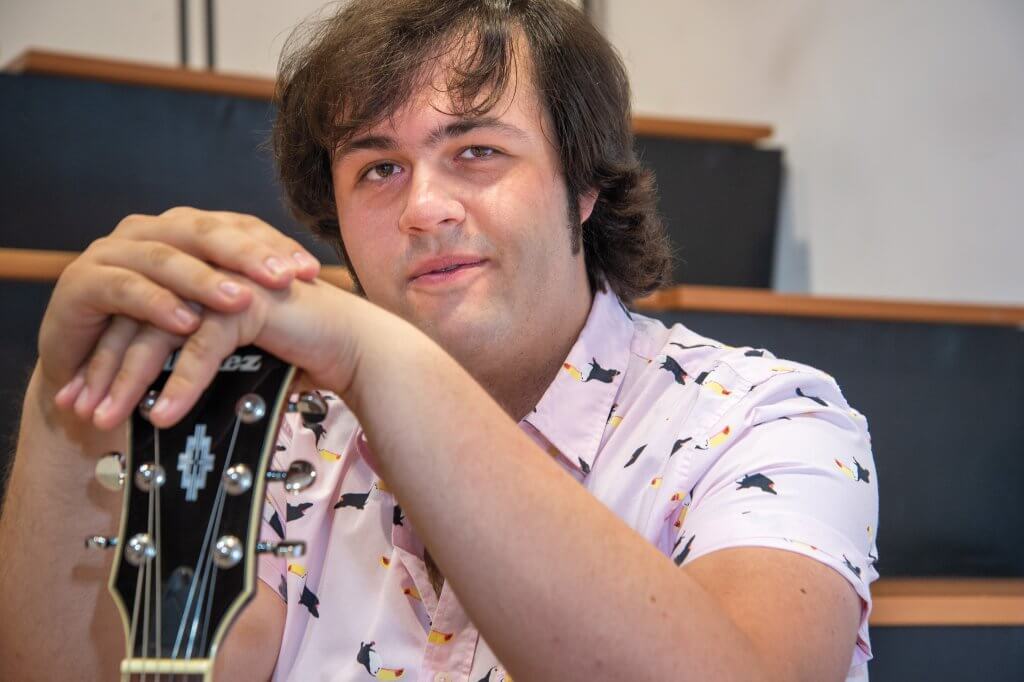 “Everything I ever wanted to do was always music,” Allesandro Rotondi exclaims. “You listen to a song. You love it. You learn it.”

Rotondi was just two years old when he started playing music. Now 21, Rotondi lives and breathes music: he wakes up to music, scours record stores for albums old and new, plays gigs across the county, writes his own songs, is part of a band called Midnight Metro with his old high school pals, and attends the University of Windsor for his Bachelor of Music. Every part of his life is dedicated to music in some way.

His lifelong affair with music started at home in a space full of love and melodies in the air. Both of his parents are big music lovers, and his dad is one of the members of the KISS tribute band, Destroyer, which tours around Canada. When Rotondi was just an infant, Destroyer would have rehearsals in the family’s basement. After everyone left, Rotondi would pop downstairs and play the bass and drums.

“When they’d take their stuff I would make drums out of pots and pans and the lids would be cymbals. That was fun,” he smiles. As Rotondi grew older, he got his mom’s old record player fixed and started playing her old records.

Then he heard The Beatles.

“When I heard those albums, I fell in love. It was their early albums like Hard Day’s Night. Straight-up pop tunes. So I started writing songs more like that,” Rotondi explains.

Rotondi grew up just before YouTube exploded. Rotondi would go to the library and take out books on his favourite bands, and he studied music by listening to it.

“I would take a record and rewind it on the record player and learn it chord by chord. Once you learn enough chords, they start to puzzle-piece together. You can make artistic decisions about what you think is going to be on a song. Now when I put on a new tune, I can learn it in about 30 seconds to a minute, once I find the key and the chords.”

Rotondi eventually learned to play guitar, piano, bass, ukulele, drums/percussion, harmonica, and vocals. When he was in high school and wondering what his potential career could be, Rotondi’s music teacher at St. Anne High School, Mr. Gagnon, changed his outlook.

“Mr. Gagnon, was talking one day and he was like, ‘Why wouldn’t you want to get up every day and do what you love as a career?’ So I thought about it and I’m like, he’s right.” Rotondi decided he would pursue music with the ultimate goal of becoming a music teacher so that he can inspire others to follow their dreams too.

Now Rotondi works weekends performing mainly vocal and guitar at weddings and restaurants, and during the week, he plays in retirement homes. Many people come up to him after he plays tunes from Elton John and Frank Sinatra in awe that he knows the songs.

When he started playing the retirement homes, he became interested in learning more songs from the ’40s and ’50s.

“They like Frank Sinatra and Tony Bennett and the residents are cool because they tell me these great stories, like, ‘I used to see Sinatra in Vegas back in the ’50s or ’60s.’ And you don’t hear that from anyone else because it’s their era. So that’s interesting to me.”

Rotondi finds great joy in playing for all age groups. “On a Friday afternoon I could be at a retirement home playing Frank and Tony tunes and then by nighttime I could be at Kildare House playing Weezer and Green Day.” He adapts to the audience after realizing what they want to hear and he has over 450 songs memorized. His favourite band to this day is The Beach Boys.

A part of Rotondi’s music degree is to take a class on ethnomusicology, where students learn about a culture of music in which they aren’t involved. He decided to study California and ended up completing one of The Beach Boys’ unfinished songs.

Rotondi thought, “How fun would it be to take the song as a blueprint and finish recording and writing it?” He arranged the song in the same way the band creates their music, with the xylophone, ukulele, and glockenspiel in the forefront. The song ended up getting to Al Jardine, one of the co-founders of the band.

“Jardine really liked it and invited me to Caesars Windsor [when the band was on tour]. Me, Ashley [Rotondi’s girlfriend], Jardine’s wife, and a couple other people were sitting there in the third row watching them rehearse. He’d ask, ‘How’s it sound?’ What do you say when The Beach Boys ask you how they sound?” he laughs.

The experience was life-changing for Rotondi. “Hearing my heroes craft music in front of me was the greatest education you could ever have.”

As for his original music, Rotondi just released his first album called Around You: the acoustic album was recorded at home and influenced by his grandfather and his relationship with Ashley. The final song is called, “What’s the Weather Like in Heaven?” Before his grandfather passed away in 2011, he’d always ask Rotondi if he had a girlfriend yet. The song is a sendoff, a progression of how far he’s come since losing such an important person in his life.

As Rotondi continues to learn about all kinds of music, he keeps an open mind when it comes to various genres. “Some people say, ‘country music sucks,’ but I try not to think like that. I didn’t know the first thing about jazz when I started university. I didn’t even know how to read music. When I got there, I found it so intriguing and scary at first, but I wanted to learn. You have to abolish your expectations and have a wide perspective on music. So, if you don’t like country music, can you appreciate the artistry? A big part of music is finding the next place to grow.”

Wherever Rotondi goes next, he’s surely one to watch grow. You can follow him here.