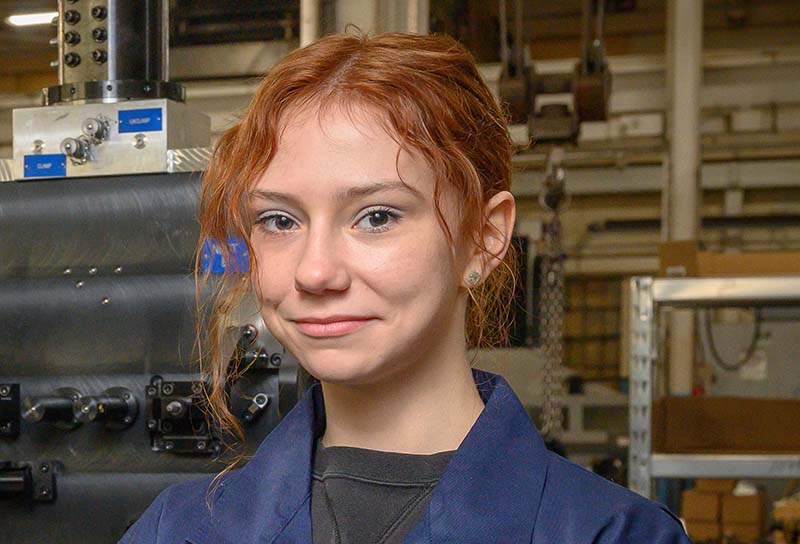 The people of Ontario have heard it before—most recently from the Minister of Labour, Training and Skills Development, Monte McNaughton: “The greatest economic challenge we face today is the labour shortage created by people in skilled trades retiring with too few young people lined up to fill their roles.”

No one has heeded this warning as proactively as Jason Lepain and the administrators of the Ontario Youth Apprentice Program (OYAP).  OYAP is a school-to-work program that opens doors for students to explore and work in apprenticeship occupations through the Cooperative Education program.  Students can become registered apprentices and work towards becoming certified journeypersons in a skilled trade while completing their secondary school diplomas.

According to Minister McNaughton: “By the year 2025, one in five jobs in Ontario will be in the skilled trades.”

OYAP inspires young people to give skilled trades serious consideration as a career choice.  The program abounds with success stories.  One that is particularly illustrative involves a seventeen-year-old Walkerville student named Caidence who gave OYAP a try and found a passion she didn’t realize she had.

“I heard about OYAP through the Create Your Future program,” Caidence explains.  “My teachers at Walkerville thought OYAP would be a good fit.”

It was a brave choice for Caidence because joining OYAP meant splitting her time between her familiar home school, Walkerville, and W. F. Herman Secondary School where the Department of Technology Studies is located.  This pushed her out of her comfort zone.  With the support and encouragement of her teachers, however, such as Natalie Browning-Morgan, Caidence took the leap.  Among the challenges she faced was finding transportation from Walkerville to Herman.

“This is a gap,” says Natalie Browning-Morgan.  “Caidence struggled with it at first, but she overcame it.”

Although hesitant at the start, Caidence was determined to give OYAP a fair shot.

“At first, I didn’t think I would like it,” she says, “but then I met Mr. Kotevich at Herman, and he showed me that this was something I could do.”

Caidence did her General Machinist apprenticeship at Nickleson Machine & Tool in Windsor.

“When I first started, I was nervous about using the CMM machine,” she says.  “Some of the other machines were the size of a house.  Some boring mills were just huge, radial drills, huge rotary surface grinders the size of a shed.”

Sixteen years of age the time, Caidence was the first female Nickleson had on the shop floor.  She saw that the floor personnel were very close and wondered if they would accept her.  They did.

Caidence’s foreman, Darren Roy, wasted no time beginning her training.  She started on the CMM machine (Coordinate Measuring Machine), which is a tool used for measuring the dimensions of machine/tool parts using coordinate technology. The dimensional measurements the CMM records include height, width, and depth in the X, Y, and Z axis.  It is used for inspecting parts before shipping to customers.

“After they trained me on CMM,” Caidence says, “I was the only person doing those inspections.  At times, they had me under pressure because every project has to be on time.  I told them: ‘You can have the other guy do it.’  But my foreman said: ‘No, you are totally capable of doing it.”

After working on her General Machinist apprenticeship, Caidence gained enough experience to realize it really wasn’t the direction for her.

“After completing my first year, I decided I preferred tool making,” she says.  “It was more hands-on.  Every day it was something different.  I had to bring my own creativity and problem-solving.”

As a result of OYAP, if Caidence maintains her academic average, she’ll have a Level I apprenticeship when she graduates from Walkerville in June.  She will work the summer at Nickleson and continue working on her apprenticeship through St. Clair College in the fall.  Students pay for their courses upfront, but if they successfully complete them, they are reimbursed those costs through grants.

Following her time at Nickleson, Caidence’s co-workers missed her.

“The employer had so many great things to say about Caidence,” Jason Lepain confirms.  “They really miss having her.  She did so many things there.”

Caidence sums up her experience with OYAP, saying: “It has been amazing.  I love working in my field.  I was so lucky with my placement at Nickleson.  They really took me in and taught me so much.  My foreman did a great job helping me.  He saw that I got a wide variety of training, experience.  I tried almost every machine in there.  I can’t wait to go back.”

The skilled trades are fast becoming the career of choice among many young people.  OYAP is a proven pathway into satisfying, well-paying jobs.  For more information, please contact Jason Lepain or Justin St. Pierre to explore the many different OYAP or Specialist High Skills Major (SHSM) programs offered at the GECDSB that could lead an exciting career in the skilled trades. If you are an employer looking for GEDCSB COOP students in Manufacturing or any other sector, please reach out to us as well. More information on SHSM program can be found at ontario.ca/SHSM.