On a quest to improve his pawn shop guitar, Phil soon found himself building and repairing guitars for some of the biggest names in music
Author: Matthew St. Amand
Photographer: Syx Langemann
6 months ago
|
No Comments
Share On 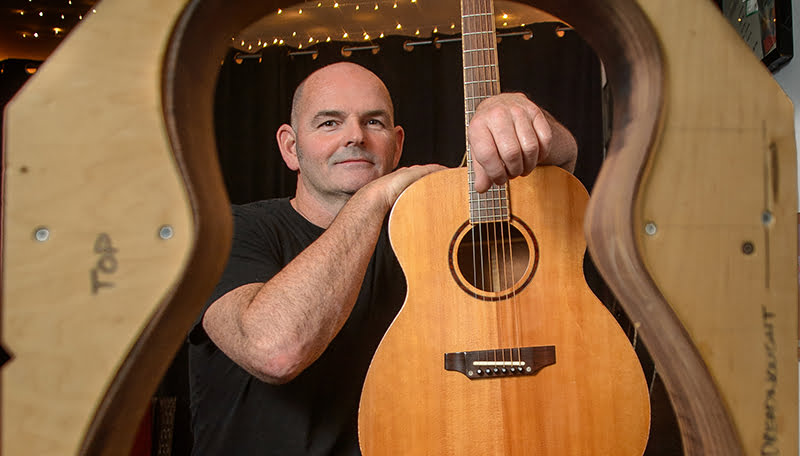 There is something almost mythic about building a musical instrument.  For more than three centuries, no one has explained or equaled the quality of sound produced by Stradivarius violins.  In the rock ’n’ roll realm, there is the origin story of Queen lead guitarist, Brian May’s one-of-a-kind guitar, “Red Special,” which he built as a teenager with his father.  Eddie Van Halen’s “Frankenstein” guitar is a thing of legend.  These instruments are conduits to magic.  What does it take to create such a thing?

One person who knows lives right here in Windsor.  His name is Phil Culleton.  He is a full-time mechanic with the City of Windsor, and in his spare time he builds guitars for a client list that reads like a Who’s Who of rock ’n’ roll and country music legends: U2’s the Edge, AC/DC, Dave Grohl, Richard Fortus of GNR, Aerosmith, Phil X of Bon Jovi, Keith Urban, Kenny Chesney, Billy Gibbons of ZZ Top, and One Direction, just to name a few.

The journey began with a New Year’s resolution in 2003.

“I made up my mind to learn how to play guitar,” Phil recalls.  “The thing is, I’m left-handed, and was looking for a lefty guitar.  I went to all the guitar stores in the city, and couldn’t find anything in my price range.  A friend, Suzanne, suggested I look in a pawn shop.  I stopped by, one day, and the shop must have had a hundred guitars.  There was only one lefty in the bunch: a cream coloured Fender Stratocaster.”

By this time in his life, Phil was a professional mechanic.  A few years earlier, he was a race mechanic, working on F2 Indy cars and AMA superbikes.  He had a knack for figuring out how things worked—or, finding out why they didn’t work.

“When I started this, I knew zero about guitars,” Phil says.  “I called my friend Dave Fazekas, who is an accomplished musician.  He showed me how to tune the guitar.  He didn’t give me lessons, but Dave just showed me a few things.  The more I played, though, I had trouble gripping some chords, or getting certain notes.  The neck was causing my hand to cramp.  I wondered: ‘What if I made the neck wider?’”

Next thing he knew, Phil disassembled his guitar.  Apart from an uncomfortable neck, he also found the body was too heavy.  He thought: “Would drilling holes into the body make it any lighter?”

When he told his wife about the updates he planned for his guitar, she responded: “Honey, Fender makes thousands of these guitars.  It’s you!”

Phil went ahead, anyhow, and soon learned that new guitar parts were not easy to find in Windsor.  He eventually contacted Guitar World magazine where he connected with a guy named Jeff Tyson, who was originally from Detroit.  Jeff gave Phil the contact info for Sheryl Crowe’s guitar tech, Peter Stroud, who ran a wholesale guitar parts business.  From there, the ricochet effect of fate took over.  Phil contacted Peter, saying he was building a guitar and looking for parts.  Peter replied: “We’re playing at DTE Energy Music Theatre next week.  Why don’t you come by and we can talk?”

“And I did,” Phil says and smiles.  That was the meeting that changed everything.

Sheryl Crowe was on tour with John Mayer at the time.  This was fortuitous because John Mayer’s guitar tech was René Martinez.  Not only had René worked for the late/great Stevie Ray Vaughn for more than a decade, but he was also Fender Guitar’s go-to guy for their top artists.

“I asked Peter and René all kinds of questions,” Phil recalls.  “They asked me about the pitch on my guitar and the fretboard radius, and what CNC program I used.  I had no idea what they were talking about.”

No matter how steep the learning curve, Phil persevered.  He learned about pitch and intonation and fretboard radius.  Then, there was a galaxy of detail that went into painting guitar bodies, learning how wood, glue, water, and chemicals reacted with one another.

Then, the rock stars began to call.

Among the first of the big names was Billy Squire who was playing with Ringo Starr’s All-Starr Band at the time.  Colin Hayes from Men at Work contacted Phil, soon after.  Then Jim McGorman and Steve Fekete from the TV show American Idol called.

“It’s all word-of-mouth,” Phil says.  “The stars can finance custom work and guitar builds, but they’re all looking for something nobody else has.”

Particularly when doing repairs, Phil finds himself filling the roles of a surgeon, psychic, and metaphysician for his clients.

“Musicians are some of the most superstitious people you’ll ever meet,” he observes.  “They’ll play a broken down guitar until it’s nearly falling apart because they just can’t part with it.  Sometimes, they adjust how they play to compensate for the deficiencies.”

Phil recalls doing work for Journey guitarist, Neil Schon, who was reluctant to part with his guitars because he was afraid of them being altered in any way.

After building dozens of guitars for more musicians than he can count, Phil is the first to say there is no secret to his success.

“Nine times out of ten, musicians want what they already have—but with a few modifications,” Phil says.

It’s one thing to cut a radical guitar body design out of wood, and bring a mesmerizing paint job to perfect polished, luster, but just because a guitar is pretty does not mean it will sound good—or possess the durability required to go on tour with a working musician.  Following a Pacific Rim tour, a rep with Aerosmith told Phil: “Your guitar was the only one that didn’t break!”

For all the superstars who have contacted him—the day One Direction and 5 Seconds of Summer called earned him bonus “Dad Points” with his daughters—Phil keeps it real.  He still works for the City of Windsor, and he did finally learn how to play guitar.  He plays a kickass version of Pink Floyd’s “Run Like Hell” on his custom built left-handed guitar.

To behold the Shangri-La of Phil’s custom built guitars, visit PSE Custom Guitars on Facebook or “psecustoms” on Instagram.