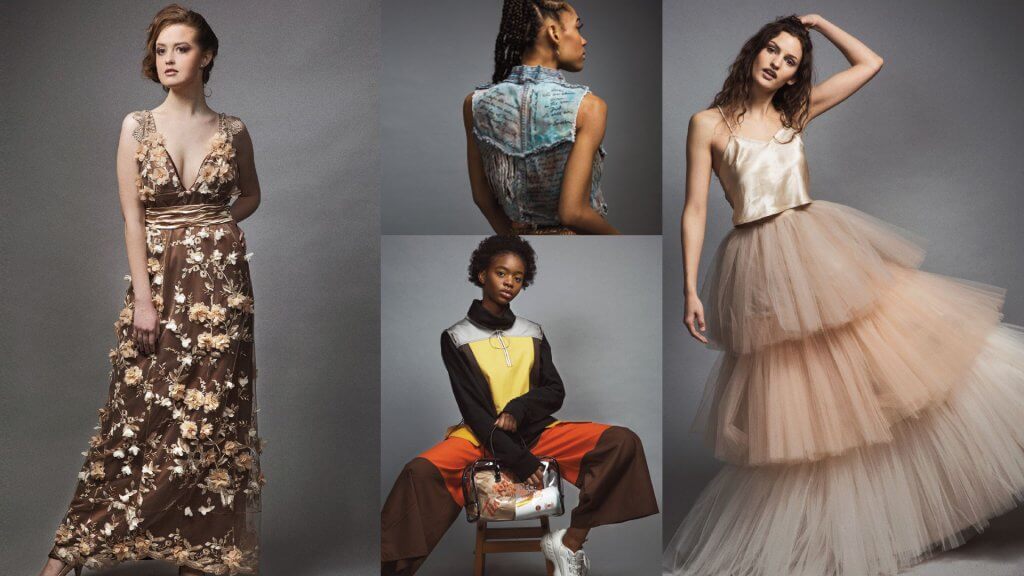 The lights are hot. The music is loud. The nervousness is palpable.

Three judges sit at a long table draped in a white tablecloth at the end of the runway, an area usually reserved for photographers stacked tightly together. Backstage, student designers are tucked behind the curtains, peeking out to watch as the room fills with curious stares

It’s show time. Creations saunter down the catwalk as the audience’s eyes bounce from garment to judge, trying to gauge their reactions.

The culmination of the Fashion Design Technician program at St. Clair College is the Atelier Fashion Show. At this annual year-end event, first – and second-year students students showcase their best work in a fun, upbeat fashion show complete with models, styling and of course, the crisp white catwalk. For the second-year students, the judges are there to rate their collections on a scale of one to five in a variety of categories. The designer with the highest score overall wins a $1,000 scholarship.

This year, the judge on the left is Windsor designer Ana Stulic. On the right sits Lisa Parete, owner of Savvy Boutique in Lakeshore. In the centre is internationallysuccessful Toronto-based designer Stephen Wong of Greta Constantine

Founded in 2006 by designers Kirk Pickersgill and Stephen Wong, Greta Constantine is a collection of ready-to-wear womenswear available across 15 countries and in over 30 stores worldwide including Holt Renfrew and Lord & Taylor. Greta Constantine has shown at both Paris and New York Fashion Week. In Windsor, their pieces can be found at Rafinée.

Elaine Chatwood is the coordinator of St. Clair College’s Fashion Design Technician program. A successful designer herself, Chatwood had admired Wong’s success from afar for many years since she first watched him on Project Runway. Through a burst of courage driven by her confidence in the program and her students, Chatwood contacted Wong and invited him to attend

“We promote creativity along with preparing students for the real world,” says Chatwood. “The more people we have to help spread the word [about our program], the better. I’m trying to create a network and connections for students to help them get their foot in the door. That’s what it’s all about.”

Always interested to see what students are doing at different schools, Wong accepted Chatwood’s invitation. This would be his first time visiting Windsor.

“I really get a kick out of going to a place I’ve never been,” Wong says. “I thought [Windsor] was beautiful. I took a walk around downtown and the waterfront and really loved the older architecture. The Walkerville area is idyllic and charming.”

What surprised Wong most about Canada’s most southern city was how humble the locals were about the beauty around them. Wong says when he told Windsorites he was from Toronto, they would ask if he was going to check out Detroit, rather than singing the praises of a local gem he should visit.

“The insecurity really caught me off-guard,” says Wong. “I saw a lot of potential in Windsor and was quite happy spending time here.”

As Wong reflects on the Atelier Fashion Show sitting at Vito’s Pizzeria for the after party, he can’t help but rave about one collection he thought was amazingly well put together. The designer is Jhon Roncal.

“I saw in [Roncal’s] collection a specific vision that was complete,” says Wong. “Through the models he casted, music, styling, hair and makeup—he was able to put his designs out there in a finished, fully realized vision. That’s an amazing thing to be able to do.”

“It’s a lot more than just making clothes these days,” he says. “You start out small-scale, doing everything yourself, so you have to wear a lot of hats. You need to be equally good at business and marketing as well as designing, creating and styling.”

At the Atelier Fashion Show, St. Clair College graduating students presented a three- to six-piece collection that they designed, drafted and manufactured. They also created a brand, styled photo shoots, planned marketing and prepared costing and tech packs for their line.

“Our program is design-based, but we try to prepare students for the industry,” Chatwood says. “You’re becoming an entrepreneur and you’ve got to do everything.”

Chatwood knows first-hand what that’s like. After attending Sheridan College for Fashion Design and working at a fabric design company in Toronto in the early years of her career, she eventually took the leap, moved back to Windsor and opened her own studio/storefront in Walkerville. Chatty Collection, a contemporary womenswear line, grew slow and steady over the next 25 years, eventually becoming a well-known staple in the area.

“In Windsor at that time, you had to work hard to build your clientele,” Chatwood recalls. “Word of mouth was everything. I did a lot of networking with people in the city. But the great thing is Windsor has a really supportive arts community. From photographers to artists, we would all help each other out.”

Like many entrepreneurs who started businesses before the introduction of the Internet and the rise in popularity of the World Wide Web, Chatwood found the key to her success was consistently adapting to keep up with the quickly changing times.

It was five years ago that change found its way to Chatwood in a form she had never expected. A fellow designer approached her with the idea to start, and lead, the Fashion Design Technician program at St. Clair College. Already planning to close Chatty Collection’s storefront to focus on wholesale and online sales, the stars had aligned for Chatwood to move into the next stage of her career.

“It was a challenge at first,” Chatwood says. “But I had the hands-on skill and knowledge of the industry and I wanted to share that with the younger generation. Seeing their growth is inspiring.”

Chatwood remembers back to when she graduated and left school with a diploma but had no knowledge of how to run a business. She had to acquire that all on her own. For the graduates of her program, she instills an understanding of branding, marketing and business acumen, allowing them to hit the ground running after graduation. With the web and social media, she also encourages her students to look outside of Windsor and to think globally.

“You can move up quite quickly in this industry if you’re a dedicated and a hard worker,” Chatwood says. “Be open to trying new areas. Be able to shift with the times. Be open to change. Don’t be afraid to make mistakes. Some of my failures have led to my most powerful lessons. Some of my best designs have come from editing a collection. Don’t be afraid to ask for what you want, just like I did with Stephen [Wong].”

The Fashion Design Technician program is capped at 25 students per year to achieve an intimate, boutique-style atmosphere where each student is given hands-on instruction and guidance from industry professionals.

“When I was four years old, my father, a descendent of many generations of Portuguese fisherman, passed away unexpectedly. My Portuguese heritage was a huge source of inspiration for this line. I was inspired by traditional Portuguese tile, painted pottery, cobblestone streets, mosaic art and architecture. I feel as though I have been on a journey to reconnect, explore and understand the missing part of my culture.”

“My collection is called Pink Gray Black. I knew the colour story I wanted to tell before I’d even sketched out my design ideas. Blacks and grays are sophisticated and elegant. They’re classics. Pink is a romantic colour. And, it added a pop of youthful energy. With nostalgia being really trendy right now, pink is a pleasant reminder of easier times.”

“Fashion is my escape from reality. I love how clothes resemble a powerful look to certain people. My collection was inspired by Corporate America, especially fast food, and I married that with my love for neo-expressionism art. I took inspiration from fast food uniforms and conceptualized it to a new idea of contemporary streetwear.”

“I decided my first collection would be eveningwear instead of modest wear because I wanted to show my versatility and appeal to a larger demographic with my debut. My collection was inspired by themes of femininity, innocence, romance and understated, timeless elegance. I wanted to convey a feeling and tell a story through my collection so I chose fabrics and colours that helped create the vibe I was going for.”

Give MOM some space

Bring local gems to your table