One of Essex County’s longest tenured and most decorated chefs opens up to The Drive about 30-plus years of success. According to him, if you’re the smartest chef in the kitchen, you’re in the wrong kitchen.
Author: Jesse Ziter
Photographer: Syx Langemann
2 years ago
|
No Comments
Share On
Share on email
Share on facebook
Share on twitter 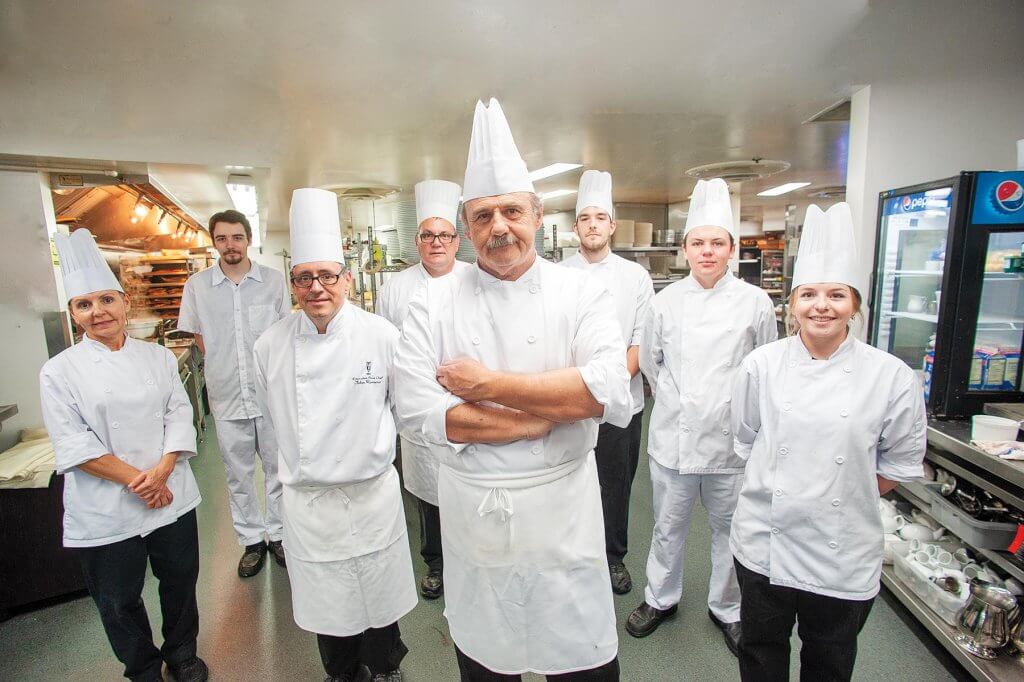 Chef John Kukucka was staying out of the kitchen. He got away with it for about eight hours.

A few years ago, Kukucka (kuh-KOOCH-kuh) returned to the former Yugoslavia after four decades. As a 13-year-old, he’d immigrated to Canada with his family in 1968. “I told my cousin before we left,” he recalls, “I said, ‘Look: I haven’t been home in 40 years. I am not going to cook.’”

On Friday night, Kukucka checked into an apartment in Zadar—a UNESCO-recognized gem dotting the Adriatic Coast, the oldest continuously-inhabited city in what is now Croatia. “On Saturday morning, a friend and I walked over to the market in the old city by the sea,” says Kukucka. “We walked by the old bridge, and all these fishermen were pulling in their catches. This guy’s cleaning a huge tuna, and he says, ‘Do you want a taste?’

I’ve stolen only a few minutes of Chef Kukucka’s prep time in the Essex Golf & Country Club kitchen, but I get the sense that we (mostly he) could talk for hours about the Old Country’s crookedly perfect tomatoes, weirdly spectacular mushrooms, and leaky unpasteurized cheeses. “It’s just different,” he stresses, recalling a banquet-scale list of his favourite ingredients. “It’s like heaven, man!”

He won’t like me saying it, but Chef Kukucka is near enough a deity in Windsor culinary circles. Since 1988, Kukucka has been Executive Chef—or chef de cuisine, if you prefer—at LaSalle’s Essex Golf & Country Club, a century-old private members club that caters to about 500 of Southwestern Ontario’s best-heeled families.

Tal Czudner was General Manager of Essex Golf and Country Club for more than eight years, and he’s known Chef Kukucka professionally for a quarter century. (Disclosure: Czudner is now Vice President of Landscape Effects Group, which publishes this magazine.) “He’s kind of been the godfather of the culinary industry in our area for the last 30 years,” says Czudner. “He’s the guy who hauls his ass out of bed first thing in the morning and he’s there until late at night. He’s extremely passionate about the food that he prepares, and he’s really made an effort to develop the local culinary guild.”

A product of W.D. Lowe High School, Chef Kukucka got his start at 18 as a busboy and later cook at The Chicken Court, a longtime Pelissier street landmark.

After showing some promise, he moved to Toronto to study culinary arts at George Brown College, graduating in 1980. Out of school, Chef Kukucka honed his chops at the Four Seasons in Yorkville before returning to Windsor to take a job at Roseland Golf and Curling Club.

“Chef John is one of the few chefs who doesn’t say no, which is a little bit unique in our business,” Czudner continues. “Everything is à la minute. If there’s a function for 240 people, he’s not pre-preparing plates of food. The beef is coming out of the oven, he’s cutting it, and it’s going on the plate and out the door.

You’d be forgiven for demanding to know the secret to Chef’s success. According to him, he owes a large part of it to the team he’s built around himself in the Essex kitchen. “I cannot stress enough that the Essex Golf culinary team is what makes my job so easy to do,” he insists. “When you work, success depends on other people. If you have people you don’t trust around you, in any business, there’s no chance in hell you can survive. It’s impossible. My theory has always been to surround myself with people who know as much as I do, if not more.”

Apprentices aside, Kukucka reckons his eight-cook kitchen team’s most junior member can boast 12 years of service—a remarkable statistic in the hospitality industry.

Linda Nelson, Chef Kukucka’s pastry chef, has been with Essex for a remarkable 42 years. Elvis Presley was still alive when she served her first dessert course in LaSalle.

During their decades of service, Kukucka, Romiens, and Nelson have witnessed plenty of change, but the former is lately celebrating something of a return to form in their line of work.

Chef Kukucka specifically looks back to the great French chef, restaurateur, and gourmand Georges Auguste Escoffier, whom he calls “our great grandfather of chefs and cooks.” Closely associated with London’s Savoy Hotel, Escoffier is largely considered responsible for bringing French recipes, techniques, and kitchen-management strategies into the 20th century.

“It’s a circular evolution—or a revolution, if you wish to call it that,” he says. “I stated in true French classical cuisine, and we ended up going all the way around to Escoffier. If you go to the finer restaurants, the plates are smaller—more of a grazing, sharing thing—but the cuisine is classical that’s done the modern way. Stuff like bone marrow and beef tongues and hearts are coming back. Butchers used to beg you to buy ‘lesser’ cuts like short rib. Now, we’re paying top dollar for it.”

While food trends can be slow to reach Windsor-Essex, Chef Kukucka dismisses any suggestion that local diners’ palates are any less sophisticated than their big-city equivalents. “As much as people say, ‘Yeah, but it’s Windsor,’ people here are very sophisticated when it comes to dining,” he notes. “They know what they want. And if it’s good food, they’ll pay for it. You have to keep in mind that they travel, so they experience different cultures, different foods, and different tastes.”

Working in a private club, Chef Kukucka is in a privileged position to observe and influence changing individual tastes over years of dining. “The beautiful thing is, we pretty well cater to the same families every day, every week, every month,” he says. “I’ve been here for 32 years and Linda’s been here for 42, but some of our members have been here for 45 years! You get to know what they like and what they don’t, and you get to suggest things to them.”

Chef Kukucka was kind enough to share a special holiday entrée with The Drive.

“Everybody is used to having turkey at Christmas,” Chef explains, “but periodically, you have to change it up. With a stuffed breast, the possibilities are kind of endless.”

This year’s rendition fills a flattened turkey breast with a separately prepared, hand-ground stuffing made with dark meat from the same bird and a hint of veal. Wrapped in fatty, moist bacon or turkey skin, it’s a fruity, nutty, umami bomb that remains as familiar as your favourite Christmas stuffing.

Sometimes, though, being a great chef means knowing when to defer to conventional wisdom.

“There’s no turkey without cranberry sauce,” Chef clarifies. “That’s a given.”

Stuffed Breast of Turkey for the Holidays

In a saucepan approximately 2 L deep, sauté onion with garlic until translucent. Season with sage and pour in turkey stock (buy at local grocery store). Bring to a boil. Check the seasoning to taste. Thicken with roux to the consistency you require:

Melt butter over medium-low heat. Add flour and mix well. Cook until golden brown, then allow it to cool before adding it to the sauce.