The Cheap Handyman by B.S. Harris

The agony and the ecstasy of trying to save a buck when dealing with home repairs
Author: Matthew St. Amand
Photographer: Dave Hunter
1 month ago
|
No Comments
Share On 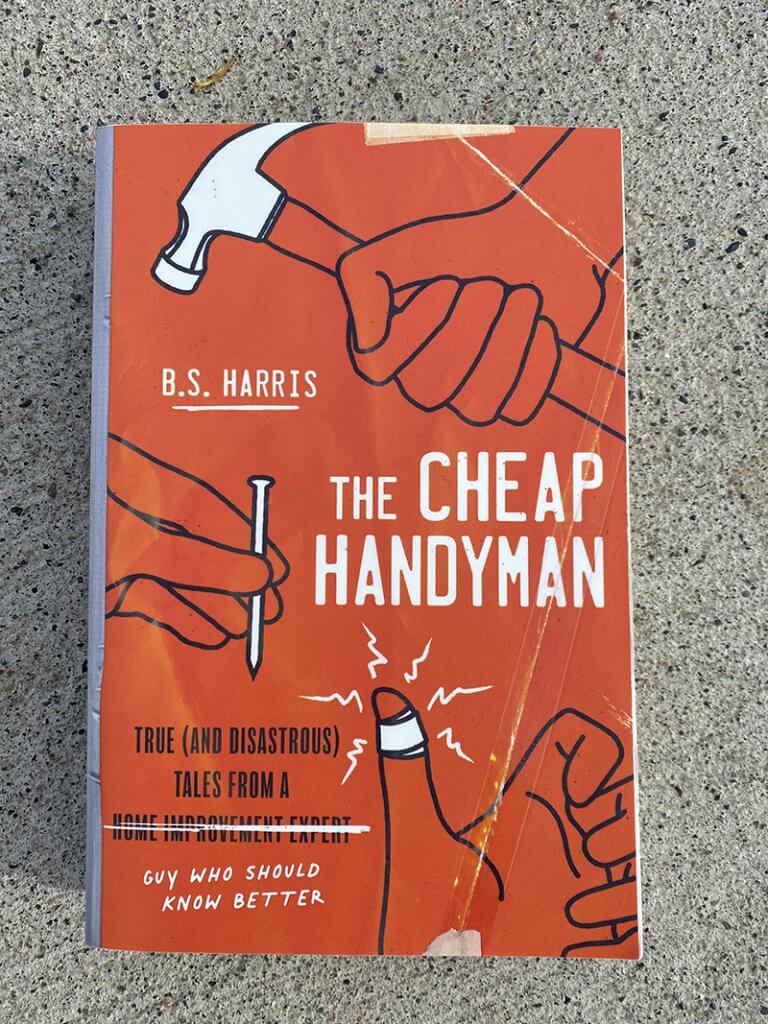 For the cheapskate—or, more politely put, the frugal among us—there is something admirable, almost valorous, about saving money. We hear the slogan in advertising all the time: “Why pay more?” Why, indeed?

Lakeshore resident, Brian Harris, has authored a book that celebrates and enshrines his frugality in a series of forty-nine entertaining stories, titled The Cheap Handyman.

At the outset, readers must recognize there is an element of bravery required to share stories of this kind. The author risks readers laughing at him, not with him. Brian avoids this pitfall because his reasoning is always sound. This is not a bungler simply bumbling into another fine mess. These are situations every homeowner faces.

There is the time the family’s refrigerator went on the fritz. When you’re raising two kids, keeping up with mortgage and vehicle payments, going out to purchase a replacement refrigerator is no simple task. As luck had it, Brian explains in the book: “I saw an ad for a used one, checked it out, and purchased it on the spot.” All he needed to do was pick up the fridge and bring it home from the seller’s house, which was “about a mile or so” away. For this job, Brian enlisted his “weathered, beat-up trailer”.

To paraphrase the great Scottish poet, Robert Burns: “The best laid plans of mice and men oft go awry.” After loading the new-old fridge onto the trailer at the seller’s house, securing the load with yards of rope and blankets, Brian made his way home. He even took the added precaution of traveling back roads where he knew he’d encounter limited traffic (and avoid detection by police who might take an interest in his ancient, less-than-road worthy trailer).

It’s up to readers to enjoy the comedy and tragedy of what happens next, but suffice it to say, Brian nearly succeeded.

The Cheap Handyman came about in much the same way its stories came about: accidentally.

“When we moved to the new house, the kids were here, and we reminisced about the old house,” Brian recalls during a conversation with The Drive Magazine. “Everybody had a memory. One of them recommended that I collect the stories in a book.”

The only problem was Brian had never written a book before. Like all the other projects, however, that didn’t stop him.

“I’m not afraid to try new things,” Brian continues. “I wrote a few chapters. When I had doubts, my wife encouraged me. I showed some chapters to a buddy, and he said they were good—and that was a guy who had no trouble telling it like it is.”

Before long, Brian had a full-length book on his hands.

“I got on the Internet and contacted a bunch of publishers,” Brian explains. “Pretty soon, it was obvious, I wouldn’t get anywhere without an agent. I was very lucky to get this guy in Toronto. He was just like me—another cheap handyman. Took a month to find an agent. Took another month to find a publisher.”

That publisher turned out to be Simon & Schuster in New York. You know, the publisher of Ernest Hemingway, Howard Stern, Carrie Fisher, and Stephen King, just to name a few.

Although landing this publishing deal is tantamount to hitting a grand slam on one’s first at-bat, the appeal of The Cheap Handyman is plain to see. Brian’s writing style is simple and deceptively comical. He gets right to the point and knows where the bull’s eye is located in each tale. He is not afraid to be self-deprecating, and his experiences are very relatable.

For instance, there is the tale about having trouble with the front wheel of his bike. He took it to his local bike shop, where the repair technician said the bearings needed to be replaced. He suggested Brian buy the bearings, watch a couple of how-to YouTube videos, and perform the repair himself. Brian gave it his best shot. Comedy ensued.

So often, the book’s humour derives from circumstances beyond Brian’s control. He takes all reasonable precautions. That’s exactly what he did in the story about the low-hanging tree limb above his driveway that scraped the top of his truck each time he pulled in. Finally, Brian had enough, and decided to cut the limb down.

“I gathered up my own chain saw, ladder, goggles, and work gloves,” he writes, “and asked a buddy to come over and assist me”. Brian even parked his truck in his next-door neighbour’s driveway to ensure his work space was clear.

The chainsaw made short work of the branch, which decided to fall directly onto one end, causing the limb to recoil like a giant spring, vault through the air, and land squarely on the hood of his truck.

A very effective touch is that each story ends with two pieces of information: “Estimated cost of job” and “Actual cost of job”. In the case of the gymnastic tree limb, the estimated cost was zero, but the actual cost turned out to be $1,350.

There is talk of turning The Cheap Handyman into a television show, but it’s too early to go into specifics. For the moment, Brian is enjoying life as an author whose book is selling in Europe, Asia, and Australia, as well as North America. He has completed his second book and is working on a third. It’s also worth noting that many of the jobs Brian undertook over the years went well.

“Hundreds of jobs have gone right,” he admits. “For instance, when we moved into the new house, the dishwasher didn’t work. I had to rip it apart and replace some parts, but I fixed it. I’ve gotten a lot of things right with cars, too.”

The book is a perfect Father’s Day gift, and a fun read, as well. It’s available at finer book shops, as well as online portals such as Amazon and Indigo.