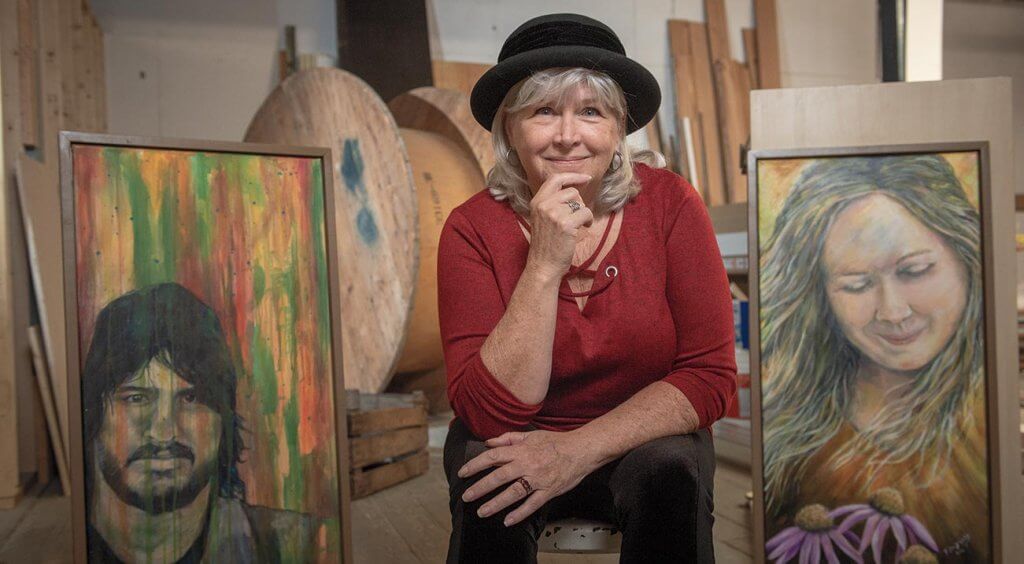 Toni Wells had always wanted to paint a portrait.

Though normally her medium is landscapes, as an artist she felt that if she could paint an accurate portrait, she “really had it.” When painting a tree, you can interpret it whichever way you’d like, but the difference between Jane and Jane’s sister is in a single stroke.

When Toni attended Peter Olsen’s open studio, he suggested that she find a photo or two that spoke to her, and she turned to The Drive, as it’s one of her favourites. Her goal was to find one male and one female—one happy and one sad. When flipping through the last four issues, the cover with filmmaker Gavin Michael Booth on the front stood out to her because his expression reminded her of loneliness, which she pulled from it for her respective painting, Tears. Brandi Bechard’s photograph, in the article about saving the pollinators, grabbed Toni because she said that Brandi radiated the joy of a young mom who’d just received flowers from her child. She named this one The Simple Things, as a reminder for us to stop and smell the roses.

Both images had an impact on her, and she feels the same will happen for anyone who visits these two portraits at her upcoming Leamington Arts Centre show titled, “What a Wonderful World” from September 30 to December 22.

The inspiration for the show came from when her oldest boy was in the first grade and was in a play based on the Louis Armstrong song. She says he would walk around the house belting out “What a Wonderful World” and “Baby Baluga,” which became his two favourite songs.

Toni couldn’t listen to this song for years as her son passed away when he was eight. Toni has endured many traumatic events in her life, and looking back now she says that no matter what crisis she’s been through, she has chosen to be thankful for everything that she does have.

“Bad times don’t last as long as the good times. If you can look upon death and say, ‘I need to go through this, feel bad, grieve, and know that it’s not forever,’ things will get better again. With that attitude, it really can be a wonderful world and a wonderful life.”

Toni says at times people get sick of her positive attitude, but she is proud to call herself an “incurable hope addict.” Her optimism and positivity can be drawn from her gallery paintings, which are colourful, full of life, and inspire us to rise up and move beyond the rough moments in life.

This will be Toni’s first solo show, and she feels so grateful to the LAC for their support to new artists. Having been retired for three years now, she is finally doing what she’s wanted to do when she enrolled in her Fine Arts degree when she was 18.

Her art is drawn by the world around her, and often by her photographer friend Jenny MacDee’s work, whose “bumblebee” inspired the art for her show’s flyer.

No matter what Toni is doing or where she goes, she says that her art never leaves her. She’s gone years without painting but she’s always sketching or doodling something. Now that she has her own studio, she’s never away from it for longer than a week. “It becomes an addiction. It’s not about painting when I’m in the mood. I have to paint. I have to draw. It’s a part of me.

“Art has always been there. It was my first career and it will be my last.”