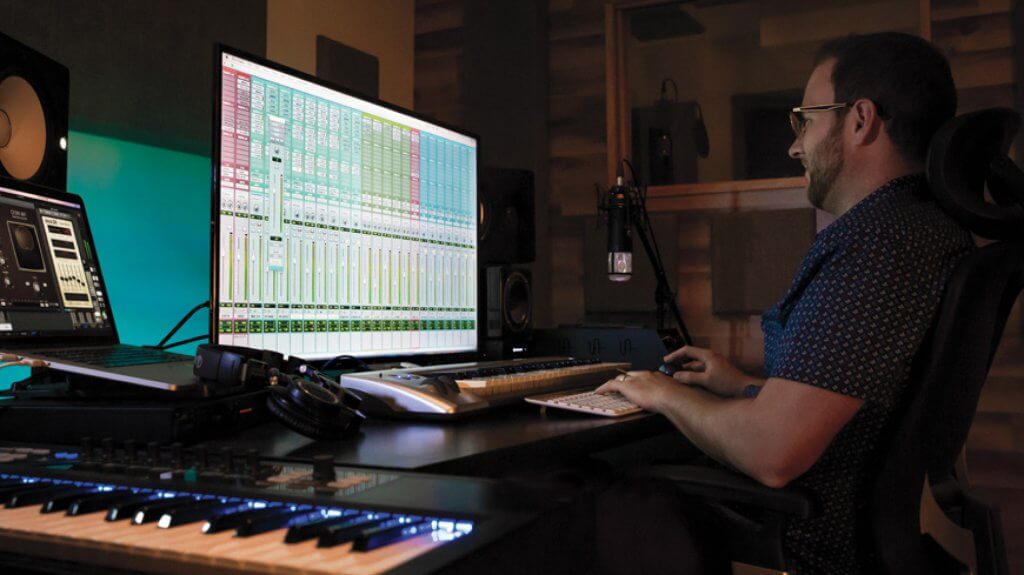 In 1959, Motown Records was founded in Detroit, which became the birthplace of the “Motown Sound” and gave rise to legends like The Supremes, The Marvelettes, and Marvin Gaye. The music industry in the area in the ’60s and early ’70s was booming as a result

In 1970, across the river in Windsor, on Drouillard Road, George Hellow opened Polaris recording studio. Only a half-hour drive away from Motown Records, Polaris attracted talent from all genres of music, including big names like The Who. As a talented drummer and sound engineer, Hellow also dedicated time to train the next generation of sound engineers, including his son, Joe Hellow

“I started [learning] with my dad when I was six years old, working in his recording studio. He trained people throughout the ’70s and they went on to become some of the best sound engineers in the industry, working with artists like Eminem and D12. I had the opportunity to learn directly from them with the support of my father.”

George Hellow died in December 2014, but his legacy lives on. “When he passed away,” says Joe, “I had to remember everything that he showed me because he wasn’t there anymore. I feel like my purpose is continuing the legacy he started so long ago and to guide people where they need to go.”

Joe, along with his cousin Richy Nix, decided to use their collective industry experience to redesign Polaris and lead it for a new generation of artists. Nix started off as a musician himself, at one point charting as the number one unsigned recording artist in Canada on MySpace, and then eventually going on to sell over 30,000 albums worldwide and performing at festivals with artists like Drake, Kesha, and Weezer. Joe has built a career doing everything from rigging for artists like Celine Dion and Carrie Underwood to currently working on the road as Post Malone’s sound engineer. Post Malone—a four-time Grammy Award–nominated artist—is just one of many big-name Polaris clients today

“When we decided to take over the studio,” says Nix, “we rebranded it and got it running for a few years. But then the studio flooded. To repair everything delayed us for a year, so in the interim I decided to open up a new spot.”

The new place, Red Dragon Studio, serves as a subsidiary to all of Polaris’s clients. Nix manages Red Dragon Studio, and it’s currently open for business and taking new clients. Joe shares that “in 2020, the plan is to amalgamate the two and build a bigger and better facility than what exists now.” At the moment, Joe is on the road with Polaris’s equipment.

Polaris used to be a full analog recording studio, but the industry has changed with technological advancements that allow quality sound production for a much cheaper price than it used to be. “Those giant soundboards are outdated,” explains Nix. “A lot of work gets done inside the box—meaning in the computer through software. The software is processed through an interface which is a piece of hardware technology that hooks up to the computer and processes the sound.”

Polaris was known to cover a wide range of genres from jazz to pop to symphony. Red Dragon Studio will be the same and Nix encourages anyone who is serious about their craft to contact the studio.

“You need to be all in. The industry is different now. It isn’t how it used to be where you could be a strung-out rock star on drugs and play your instrument and get a record deal and be famous. We’re seeing artists now who are focused and can do multiple things. They can handle their business, handle recording and mixing, and they’re more involved. You have to be versatile now to leave a stamp in the industry.”

The gatekeepers in the business who once dictated who gets heard and who doesn’t are not as powerful in the age of tablets, smartphones, and social media, where anyone can upload a new track online and become an overnight viral sensation. But balancing the art of music with the high-pressure demands of the business is the critical skill that sets one-hit-wonders apart from musicians who leave a lasting mark on the industry

Brandon Unis, a Windsor native and a music producer in the Edmonton-based production duo called “Towers,” believes authenticity stands out in an increasingly crowded music market. “There’s way more music out there than can be digested. But at the same time, the cream always rises to the top.” In a space that’s fast-moving and unpredictable in terms of what will be trending next, Unis reminds us that “one thing we have to avoid as producers and songwriters is trying to fit the mould of what’s popular right now. Trends move so much faster [than they used to] and I think it’s great for creativity because it forces people to be unique and be themselves. And they create what they believe in.”

To describe what the future of the industry looks like, Unis recalls a classroom lesson he had over 10 years ago when he was a student at Fanshawe College. “We’re moving into a streaming society. I remember a professor shared a theory where he described music like water. You turn your tap on and unlimited water comes out. His prediction was that we’re going to be paying for music like a utility.”

The professor was right. Platforms like Spotify—a monthly subscription service that allows unlimited music streaming—are reflective of what the future of music consumption looks like. Purchasing entire albums may eventually become obsolete

Unis has worked with notable people in the business like Juno Award–winning producer and Grammy-nominated musician Kevin Doyle, and has written and composed songs with Juno-nominated artist Karl Wolf. He has also interned in Nashville at the famous Quad Studios and was a partner at Cylinder Sound & Film in Toronto. His most recent move was to Edmonton, Alberta.

A decade or two ago, Edmonton may have seemed like an unusual city to live in to pursue a successful career as a music producer. But now, with the help of technology and social media, great music can be made and distributed from anywhere. This is one of the many reasons Nix decided to set up a studio in Windsor instead of in a large, crowded, metropolitan city

“There’s a stigma that if you’re from Windsor, you’ll never make it big outside of Windsor because it’s not a happening city. But if we want cool things to happen in Windsor we need to make cool things. Just like in any other city. Those cities didn’t just appear—people created them. People went out and made things. There’s no studio in Windsor? Let’s make one. There’s no record label? Let’s create one. It’s a matter of doing things

With the state-of-the-art technology available at Red Dragon Studios, Nix is hopeful that the next big artist will come out of Windsor. “There’s no lack of talent. There’s a plethora of good talent here. I’m willing to help people in the city and I hope more people are like me and are willing to make cool things so that artists can change that train of thought that if they’re from Windsor, they won’t make it big outside of here.”

Windsor: Then and Now