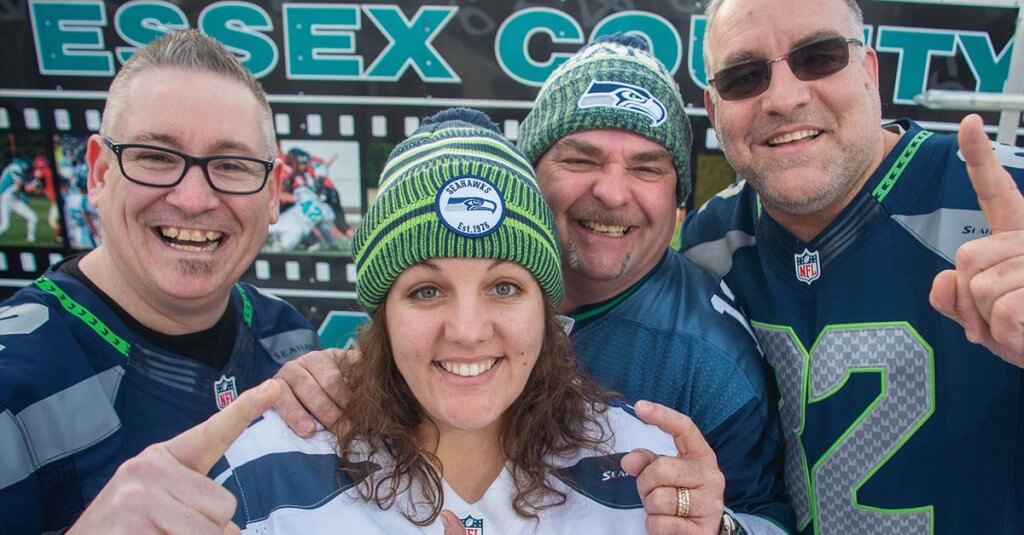 It was the woo heard ’round the world—and a shivering, shirtless crew of Windsor-Essex football fans became its viral face. When their phones started exploding midway through the Seahawks-Packers game, Windsor’s “Woo Crew” had no idea frustrated football fans back home and around the world thought they were the jerks ruining the game for a television audience of millions.

“When your picture is trending, you know you’ve gotten big,” says James Smith, one of four Windsor-Essex residents caught up in a social media maelstrom that continued to percolate long after the NFC Divisional playoff tilt. “It was incredible. It was surreal.”

Google ‘Green Bay Woo Guy’ and there they are. YouTube? Check. Twitter? Boom. USA Today shared with its 4 million followers a picture of the four locals atop a story highlighting the ire of fans. Even though Smith, Joe Clark, Glen Mills, and Jordyn Mills were nowhere near the scene of the incessant wooing picked up by a crowd mic, they will forever be associated with it because their picture went viral along with the story.

“My phone is dinging and just blowing up. It’s one text and one message after the other: ‘You guys are the woo guys!’ What are they talking about? We don’t know,” says Mills, the coach of the Essex Ravens. “I pull out my phone and it’s a picture of us on USA Today.”

It’s a great picture and it screams playoff football. Clark, Mills, and Smith are naked from the waist up save for toques to ward off a northeast wind that was whipping through Green Bay’s Lambeau Field. Jordyn, Mill’s adult daughter, laughs and points at the camera. She’s decked out in Seattle colours, cheering on LaSalle’s Luke Willson deep in the heart of enemy territory.

It sure looked like one of them could be the woo guy screaming on the Fox TV broadcast every time Green Bay had the ball, but they swear they were up in their nosebleed seats when the wooing ignited Twitter outrage.

The photo had been taken before the game when they were field-side for the warmup. A dare from football friends back home had them “joking about doing something crazy to get on TV,” says Smith, so they took off their shirts and whooped it up for the players and cameras, bitter Wisconsin winter be damned.

“It was nuts. It was a crazy atmosphere. Players were laughing. They were high-fiving us. Even the Green Bay fans were going crazy,” says Mills. “They were taking pictures and videos. They were loving it.”

Jordyn streamed the frigid festivities live to Facebook. She heard her father and his friends talk about going shirtless on the eight-hour road trip to Green Bay, but she never thought they’d go through with it. Not in January and not in Green Bay—on a day when you could see your breath.

“It was freezing cold. It was ridiculous,” says Jordyn. “People were dying with laughter. They were just cracking up.”

They threw their clothes back on after about 20 minutes and went back to their seats, but, before the first-half was through, their phones began buzzing beneath multiple layers of clothing. Their 15 minutes had arrived. The press had snapped their picture and they were the faces of a sound so annoying it became a bit on Jimmy Fallon.

“It was madness. It was hilarious. It became a running joke. ‘You guys are the woo guys,’” says Jordyn. “There are still messages saying you are the woo crew. It was not us.”

Smith, a special education teacher and autism advocate, is using his story as an example to his students about how quickly things can spiral out of control online and how they need to be alert and aware.

He says a trip to Lambeau Field in the playoffs is a football fan’s dream come true and that it came courtesy of Willson, who never forgets where he came from and who always helps out charitable causes when he comes home.

Willson has visited the kids in Jordyn’s classroom, which has a playoff bracket on the wall and where children sometimes sit in a circle and take turns speaking, passing a football around like a conch.

“He’s the most incredible guy you would ever want to meet. Taking some old coaches and bringing them out to Lambeau. It doesn’t get much better than that,” says Smith. “It was an amazing experience. Trip of a lifetime doesn’t even begin to describe it.”

James Smith was honoured when Seattle Seahawk GM John Schneider shook his hand before the game and gave him a 12th Man flag. Smith is on the local leadership council of Autism Ontario and Schneider, who has a son with autism, has set up a program for children with autism in Seattle.

“I was head over heels,” says Smith. “It was amazing.”

Smith, a special education teacher since 1997, sets up booths at Spitfire games and events like Bright Lights Windsor to build awareness about autism. He is organizing an event involving American professor and autism advocate Temple Grandin on March 31 at the Caboto Club. He will be profiled in the March edition of The Drive.